Digital Adventures with Avatars, Activities, Tips & Resources. Digital Adventures with Avatars! Tips & Resources for Teachers. Avatar (computing) The word avatar originates in Hinduism, where it stands for the "descent" of a deity in a terrestrial form. (Deities in India are popularly thought to be formless and capable of manifesting themselves in any form.) In Norman Spinrad's novel Songs from the Stars (1980), the term avatar is used in a description of a computer generated virtual experience. In the story, humans receive messages from an alien galactic network that wishes to share knowledge and experience with other advanced civilizations through "songs". The humans build a "galactic receiver" that describes itself: The galactic receiver is programmed to derive species specific full sensory input data from standard galactic meaning code equations.

From the last page of the chapter titled "The Galactic Way" in a description of an experience that is being relayed via the galactic receiver to the main characters: Some avatars are animated, consisting of a sequence of multiple images played repeatedly. Avatars. Avatar Creators - Web tools for kids. Thedaringlibrarian - Avatar_Generators. FaceYourManga. Animate Your Life. BuddyPoke! Minecraft avatar maker. Smurf Yourself. Bitstrips - Comics starring YOU and your Friends. The Hero Factory. Voki Home.

Reasonably Clever » Classic Kid-Safe Mini-Mizer. Chris Doyle Presents - Reasonably Clever! Wasting your workday since 1995. BuiLD YouR WiLD SeLF. Avatars Teach Teens About Self-Image. Even as the national beauty obsession grows, a new virtual world has emerged to give kids another perspective about image. 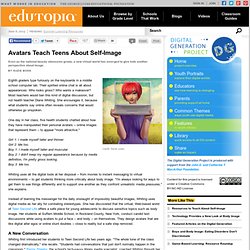 Credit: David Julian Eighth graders type furiously on the keyboards in a middle school computer lab. Their spirited online chat is all about appearances: Who looks gross? Who wants a makeover? Most teachers would ban this kind of digital discussion, but not health teacher Diane Whiting. One day in her class, five health students chatted about how they have manipulated their personal avatars -- online images that represent them -- to appear "more attractive. " Girl 1: I made myself taller and thinner.

Whiting uses all the digital tools at her disposal -- from movies to instant messaging to virtual environments -- to get students thinking more critically about body image. Instead of blaming the messenger for the daily onslaught of impossibly beautiful images, Whiting uses digital media as her ally for combating stereotypes. A New Conversation Enter Teen Second Life. What’s the Game? Avatars in the Classroom : TEACH Magazine. What’s the Game? 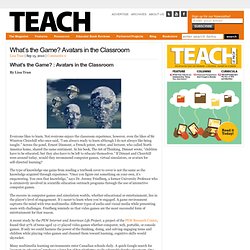 : Avatars in the Classroom By Lisa Tran Everyone likes to learn. Not everyone enjoys the classroom experience, however, even the likes of Sir Winston Churchill who once said, “I am always ready to learn although I do not always like being taught.” Across the pond, Ernest Dinment, a French priest, writer, and lecturer, who called North America home, shared the same sentiment. The type of knowledge one gains from reading a textbook cover to cover is not the same as the knowledge acquired through experience. The success in computer games and simulation worlds, whether educational or entertainment, lies in the player’s level of engagement. Portrait Avatar Maker : Free Avatar Generater!