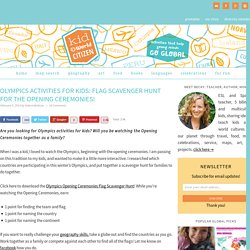 Will you be watching the Opening Ceremonies together as a family? When I was a kid, I loved to watch the Olympics, beginning with the opening ceremonies. I am passing on this tradition to my kids, and wanted to make it a little more interactive. I researched which countries are participating in this winter’s Olympics, and put together a scavenger hunt for families to do together. How Olympic Locations Are Chosen. How the Olympic Locations are Chosen Every two years, cities around the world make bids to the International Olympic Commission (IOC) to host the Olympic Games. 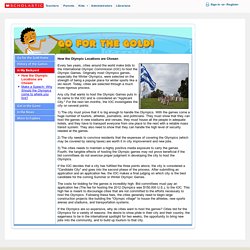 Originally most Olympics games, especially the Winter Olympics, were selected on the strength of being a popular place for winter sports like a ski resort. Today, cities are selected through a much more rigorous process. Olympic History. About history of Olympics. As I wanted to crosscheck the historical facts and information given by the Olympic Games comic I thought i should first check what other valuable sources online would have to say about ancient Olympic Games. 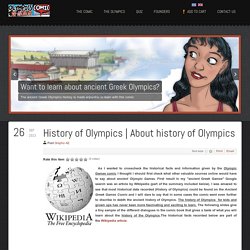 First result in my "ancient Greek Games" Google search was an article by Wikipedia (part of the summary included below). I was amazed to see that most historical data recorded (History of Olympics) could be found on the Ancient Greek Games Comic and I will dare to say that in some cases the comic went even further to discribe in debth the ancient history of Olympics. The history of Olympics for kids and grown ups has never been more fascinating and exciting to learn. FREE Printables from MakeBeliefsComix.com! Ask the ToonDoo Ferret! FREE Printables from MakeBeliefsComix.com! 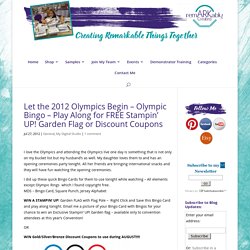 My daughter loves them to and has an opening ceremonies party tonight. All her friends are bringing international snacks and they will have fun watching the opening ceremonies. I did up these quick Bingo Cards for them to use tonight while watching – All elements except Olympic Rings which I found copyright free. MDS – Bingo Card, Square Punch, Jersey Alphabet WIN A STAMPIN’ UP! WIN Gold/Silver/Bronze Discount Coupons to use during AUGUST!!!! Crafting Joy JANET You Might Also Be Interested In: Happy National Coffee Day with Project Life APP I love Social Media because you learn things - for instance I learned on instagram just a bit ago that today is National Coffee Day so I used that a an excuse to play with the Becky Higgins Project Life App and Stampin' UP!

September 29, 2014. Olympic Rings and Other Things: July 2015. Sometimes it feels as though nobody's reading the blog. 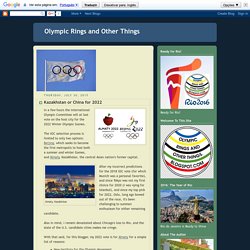 No matter the occasional click-tracker upticks, the positive Blogspot stats, or meager ad revenue (did I mention meager?) , the big fat 'zero' in the comments section stings when on the brain of an online writer. But every once in while, out of the blue, an email arrives from a reader acknowledging your work, and these moments of reassurance** keep you typing. One such email arrived earlier this year from Jason Vuic, an author and historian with a new nonfiction book titled "The Sarajevo Olympics - A History of the 1984 Winter Games" published by University of Massachusetts Press. What a great read! For context, before reading Vuic's text my knowledge of the Sarajevo Olympics was decent but filled with holes. Olympics Worksheets and Activities. Click here for our Winter Olympics Worksheets Lanternfish has a variety of ESL worksheets and activities for the 2008 Summer Olympics in Beijing, China. 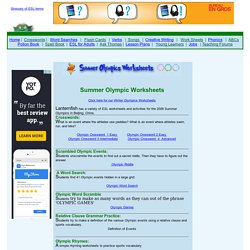 Crosswords: What is an event where the athletes use paddles? What is an event where athletes swim, run, and bike? Summer Olympics Bingo. 27 Quotes on the Olympics. Associated Press Interactive. Search Results. September 3, 2015 by Larry Ferlazzo0 comments We’ve got a long ways to go, but I figured it wouldn’t hurt to begin a “Best” list on next year’s Olympic Games in Brazil. 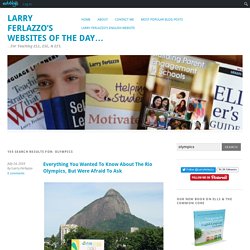 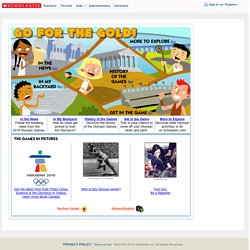 All Rights Reserved. The Olympic Games. EdGate Summer Games. The following lesson plans are not tied to any text series, however most do require classroom Internet access. 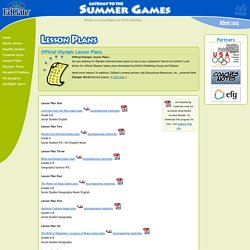 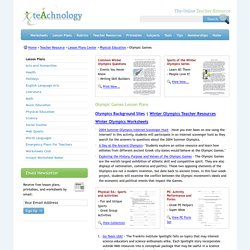 Lesson Plans for studying the Olympics. Olympics activities and lesson plan ideas. Introduction: The Olympic Games are a major international event of summer and winter sports, in which thousands of athletes compete in a wide variety of events. The games are currently held every two years, with Summer and Winter Olympic Games alternating. Olympics Theme - Lesson Plans, Thematic Units, Printables, Worksheets. Olympic Games Resources for Teachers. Highlights SummerSummer is almost over! Whether you still have several weeks until the first day of school, or just a couple, you can still focus on engaging students' minds while they're on vacation. Try our summer reading suggestions, math and science worksheets, and cross-curricular resource packets to prepare kids for what the next school year will bring! August Calendar of Events August is full of events that you can incorporate into your standard curriculum. Our Educators' Calendar outlines activities for each event, including: Ice Cream Sandwich Day (8/2), Pres.

Videos Interested in using different types of media in your classroom? Coding & Computer Science Introduce your students to basic coding and computer science! Gold Medal Olympics Activities. Citius, Altius, Fortius. Those are the Latin words for the Olympic motto, which in today's language means "Swifter, Higher, Stronger. " The best athletes from around the world exemplify that creed as they compete in the Olympic Games. As the Games get underway, Education World offers you ten gold-medal lessons. Included: Activities that involve students in creating time lines and graphs, writing biographies of famous Olympians, and much more.

In the name of all competitors, I promise that we shall take part in these Olympic Games, respecting and abiding by the rules that govern them, in the true spirit of sportsmanship, for the glory of sport and the honor of our teams. -- Olympic Oath, written by Baron Pierre du Coubertin, founder of the modern Olympics. Click any headline below for a complete teaching resource.

Create Your Own Classroom Olympics Complete activites that emphasize skills and knowledge as well as a little luck. Olympics lesson plans for teachers.