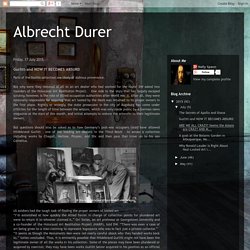 But why were they restored at all to an art dealer who had worked for the Nazis? DW asked two founders of the Holocaust Art Restitution Project. One side to the story that has largely escaped scrutiny, however, is the role of Allied occupation authorities after World War II. After all, they were nominally responsible for ensuring that art looted by the Nazis was returned to its proper owners in the first place. Albrecht Durer: The Secrets of Apollo and Diana. Copyright Dr. 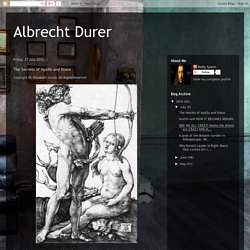 Elizabeth Garner All Rights Reserved Durer did not name this print and from the stance of the man with the bow, it can’t even be claimed to be representing Apollo and Diana. Diana was Apollo’s twin virgin sister, the huntress. Let’s look at the symbols in the print: 1). 2). BOSTON PUBLIC LIBRARY HEIST- What's wrong with this picture? Lax security cited in artworks’ disappearance - The Hidden Secrets in Albrecht Durer's Art and Life. Picture of stacks inside the Boston Public Library FIRST, the image of the library racks is misleading to all. 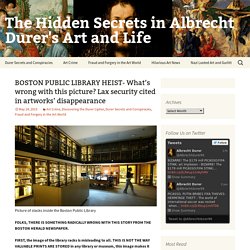 THIS IS NOT THE WAY VALUABLE PRINTS ARE STORED in any library or museum, this image makes it look like there’s NO SECURITY AT AT WHICH IS NOT TRUE, I’VE BEEN IN MANY MUSEUM SECURED PRINT ROOMS AND SPENT MUCH TIME AT THE BOSTON PUBLIC LIBRARY LOOKING AT THEIR WONDERFUL DURER PRINTS, AND I WAS UNDER COMPLETE SURVEILLANCE, GUARDED IN A LOCKED ROOM, THEY HAD TIGHT SECURITY MEASURES. And I was there after Hitchings was gone, having been an auditor one time in my career, there were NO LAX SECURITY MEASURES with this collection, ESPECIALLY with the Durers I was inspecting. SECOND, THIS REPORTER is NOT ASKING OR REPORTING ON THE RIGHT QUESTION AT ALL, which SHOULD BE HOW MUCH FUNDING DOES THE BPL HAVE FOR SECURITY OF THESE PRINTS?

IS IT PRIVATE FUNDING OR PUBLIC? PICASSO, PUTIN BRIBES FIFA THIEVES-HERMITAGE THEFT - The Hidden Secrets in Albrecht Durer's Art and Life. The world of international soccer was rocked when seven officials from its governing body, FIFA, were arrested, and many more indicted, by US and Swiss authorities in Zurich on charges of racketeering, fraud, and money laundering as part of an investigation that the US Justice Department has declared has only just begun. 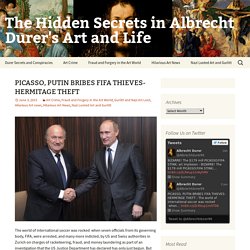 But what does this have to do with art? It’s alleged that soccer authorities systemically took personal bribes, some $150 million according to the New York Times, to sway their decision-making about things like who would get to televise games, who would oversee the worldwide soccer organization, and who would get to host the World Cup. The committee got its information about the Russian bid “from a network of British embassies and private intelligence firms staffed by former MI6 officers” and was disclosed in a dossier that parliament published. BIZARRE! MORE DURER/BOSTON LIBRARY stuff missing! - The Hidden Secrets in Albrecht Durer's Art and Life. FIRST THIS APPEARS: Apparently more than just valuable artwork is missing from the Boston Public Library’s archives. 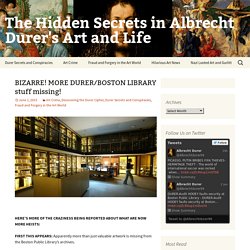 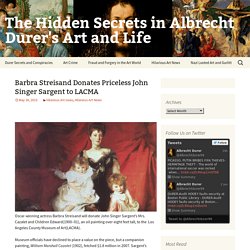 Cazalet and Children Edward(1900–01), an oil painting over eight feet tall, to the Los Angeles County Museum of Art(LACMA). Museum officials have declined to place a value on the piece, but a companion painting, William Marshall Cazalet (1902), fetched $1.8 million in 2007. Sargent’s record at auction is $23.5 million, for Group with Parasols (A Siesta), 1905, which sold at in 2005, and 17 of his paintings have exceeded the $2 million mark at auction. The Secrets of St. Jerome in his Study Part 1-“They Talk Like Angels but they Live Like Men” Most art historians think that Albrecht Dürer did many saint images and that St. 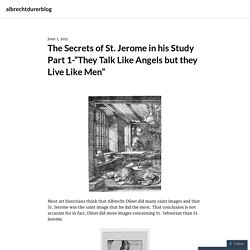 Jerome was the saint image that he did the most. That conclusion is not accurate for in fact, Dürer did more images concerning St. Sebastian than St. Secrets: “Live That You Wouldn’t be Ashamed to Sell the Family Parrot to the Town Gossip. THE SECRETS OF RINGS AND THINGS. Most researchers have ignored the titles that Dürer gave to his prints which has really mucked things up in understanding what Dürer was telling us. 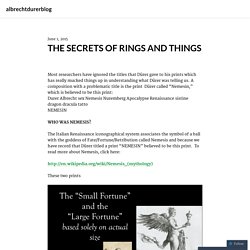 A composition with a problematic title is the print Dürer called “Nemesin,” which is believed to be this print: Durer Albrecht sex Nemesis Nuremberg Apocalypse Renaissance sistine dragon dracula tatto NEMESIN WHO WAS NEMESIS? Morality is a Venereal Disease -The Secret of the Coat of Arms with a Skull. “Morality is a venereal disease. 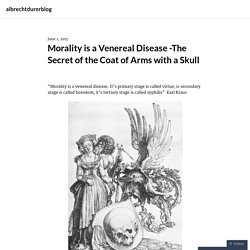 It’s primary stage is called virtue, is secondary stage is called boredom, it’s tertiary stage is called syphilis” Karl Kraus In 1494 and 1495 when Dürer fled to Venice to escape the Plague in Nuremberg, Italy was at war. Charles VIII, the Dauphin, the heir to the French Throne, had invaded northwestern Italy in the spring of 1494. Charles trampled over the Italians and marched down the coast of Italy, invading Naples by March of 1495. The Republic of Milan, which bordered the Republic of Venice, had sided with Charles VIII. For our purposes, it is most important to know that Charles VIII is credited with spreading syphilis throughout all of Europe because of these Italian Wars.

The Secrets of What are Albrecht Dürer Prints Worth? But for those who are more savvy, usually the best way to acquire any print is at auction. 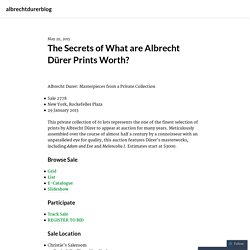 Christies Auction House is having one of the most significant sales of a private collection of Dürer prints which will take place in New York City, Rockefeller Plaza on Jan 29, 2013. Normally, I would not be giving any auction house free publicity but this is one of the most significant Dürer auctions to have occurred since 2007. The Secret of Dürer’s Penis Revealed. Cipyright Dr. Elizabeth Garner All Rights Reserved Text copyright © Jan 23, 2013 Dr. Elizabeth A. Garner, All Rights Reserved Let’s get real and talk about Dürer’s penis for it is a very important penis indeed.

The Secrets of Christies Auction Results-Astounding Dürer Art Prices. Since I had previously brought to your attention the fact that one of the largest Durer auctions was occurring at Christies on Jan 29, 2013, I thought I would publish some of the results, for some of the prices really blew me away. This auction realized over $6 million in sales. Not all of the prints sold . Here are a few highlights of some of the surprises: Price Realized $50,000 Sales totals are hammer price plus buyer’s premium.

What is the Secret of an Apocalypse Art Cycle? Part 1 of the Apocalypse is Coming. “Whenever a man feels the precariousness of his experience, he turns to a picture.” Frances Carey. Depicting the story of the last book of the Christian New Testament, called Revelations, but usually referred to as the Apocalypse, and which is the only book of the New Testament completely written in verse, was nothing new in European art from at least 1050 A. D. onwards. The word “Apokalypsis” is Greek, meaning to unveil or reveal, hence the story being called Revelations. It obviously significantly affected people because it was represented in such a variety of media and contexts over such a long period of time, and that doesn’t happen unless the imagery is very effective.

Albrecht Durer: The Secrets of Venus or Aphrodite, Albrecht Dürer, and K. Bender. Venus or Aphrodite has often been the subject of art. Often past researchers have believed that Albrecht Durer depicted Venus in some of his prints (See Part 2 Discovering the Durer Cipher: Hidden Secrets in Plain Sight). Dürer also made a drawing “Venus with Cupid the Honey Thief (the 1514 pen and ink and watercolor on paper (Kunsthistorisches Museum, Vienna, Austria), a theme which was later depicted numerous times by Lucas Cranach and his workshop.

Albrecht Durer: Albrecht Durer Secrets now on Youtube. Albrecht Durer: Sex Slut of Nuremberg. Albrecht Durer: Discovering the Dürer Cipher: Hidden Secrets in Der Reuter and 1498 Promenede. The World’s top ART CONVICTS - albrechtdurerblog. 1. Lawrence Salander Once upon a time, the Salander-O’Reilly Galleries were considered among the top galleries in the world. However, by 2007, Salander had racked up lawsuits from numerous customers and business partners who claimed that the company had defrauded them—one such lawsuit described the gallery as “nothing more than a Ponzi scheme.” In 2010, “the art world’s Bernie Madoff” was sentenced to 6 to 18 years in prison for his crimes, and is currently imprisoned.

HEY NEWBIE ART COLLECTORS! Here’s your rules to be “special” The art world can often feel like a social minefield, booby-trapped so that as soon as you start to make progress in establishing a name for yourself, you screw it up with a big-time blunder. Albrecht Durer: Leonardo DiCAprio’s Art Collection. He’s just acquired a 1973 work by Frank Stella. In May 2013, he pocketed a Takashi Murakami painting at a Christie’s sale he orchestrated. He has for a long time coveted the canvases of Jean-Michel Basquiat and now, Ed Ruscha and his childhood memories involve cartoonists Robert Williams and Robert Crumb. Oh, and as an ultimate emblem of his art world stature, he’s sat for a portrait by Elizabeth Peyton. Albrecht Durer: Secrets of the Duerers’ Prodigal Son. Copyright Dr. Albrecht Durer: Why Ronald Lauder Is Right About Nazi-Looted Art in Museums.

In his article titled “Lauder Editorial on Stolen Art and Museums Fails the Glass House Test,” Nicholas O’Donnell attempts to respond to Ronald S. Lauder’s editorial published in the Wall Street Journal on June 30, 2014, titled “Time to Evict Nazi-Looted Art From Museums.” O’Donnell attempts to find legal shortcomings in Lauder’s editorial, which simply expresses the need for art museums to act responsibly by returning Nazi-looted artwork instead of raising technical defenses and mere pretexts to deny the rights of the claimants. In his article, O’Donnell refers to the ongoing case brought by Léone Meyer against the University of Oklahoma, among other defendants, to obtain the restitution of La bergère rentrant des moutons (Shepherdess Bringing in Sheep) (Camille Pissarro, 1886), currently on permanent display at the Fred Jones Jr.

Museum of Art in Norman, Oklahoma. Although O’Donnell—counsel to David Findlay, Jr. Albrecht Durer: The World’s top ART CONVICTS. Albrecht Durer: HEY NEWBIE ART COLLECTORS! Here’s your rules to be “special” The art world can often feel like a social minefield, booby-trapped so that as soon as you start to make progress in establishing a name for yourself, you screw it up with a big-time blunder. Here are those unofficial rules 1. Albrecht Durer: Leonardo DiCAprio’s Art Collection. Practice Areas. 11 Tax Secrets all Art Collectors should know - The Hidden Secrets in Albrecht Durer's Art and Life. In the United States, use tax (the term used to refer to VAT in the context of imports) and sales tax vary from state to state. Residents of Oregon, Montana, New Hampshire, and Delaware are not required to pay any sales tax whatsoever, while the unfortunate art lovers of New York City must pay 8.875% sales tax, the highest figure anywhere in the country. Capital gains tax, the tax paid on income generated by the sale of assets whose value has risen since purchase, is applicable to artworks across the U.S. provided that more than a year has passed between the purchase and resale of an artwork.

When resale occurs within a year of the original purchase, any income gained is subject to normal income tax, which can reach 39.6% depending on annual income. In the United States there are a number of laws in place that encourage patronage of the arts, with tax deductions for individuals and organizations that donate artworks and cultural goods to foundations and nonprofit institutions.