Humanity is more important and honest than objectivity for journalists. One of journalism’s favorite notions is that we don’t become part of the story. 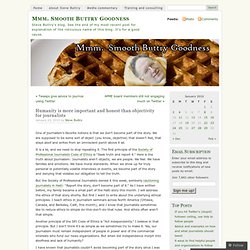 We are supposed to be some sort of object (you know, objective) that doesn’t feel, that stays aloof and writes from an omniscient perch above it all. It is a lie, and we need to stop repeating it. The first principle of the Society of Professional Journalists Code of Ethics is “Seek truth and report it.” Here is the truth about journalism: Journalists aren’t objects; we are people. We feel. But the Society of Professional Journalists denied it this week, somberly cautioning journalists in Haiti: “Report the story, don’t become part of it.” Why secrets aren't safe with journalists. Importance of objectivity  Ann Opotowsky, a freelance writer and director of the TV documentary Burning Questions: The Poisoning of America, led a discussion at Comm Week Thursday on maintaining balance and objectivity in the craft of journalism. 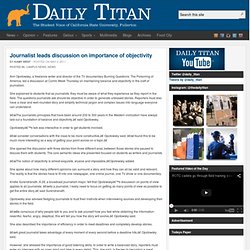 She explained to students that as journalists, they must be aware of what they experience as they report in the field. The questions journalists ask should be objective in order to generate unbiased stories. Reporters must also have a clear and well-rounded story and simplify technical jargon and complex issues into language everyone can understand. â€œThe journalistic principles that have been around 200 to 300 years in the Western civilization have always laid out a foundation of balance and objectivity,â€ said Opotowsky. Opotowskyâ€™s talk was interactive in order to get students involved. â€œI consider conversations with the class to be more constructive,â€ Opotowsky said. â€œI found this to be much more interesting as a way of getting your point across on a topic.â€

Norm in american journalism. Principles of Journalism. The first three years of the Project’s work involved listening and talking with journalists and others around the country about what defines the work. 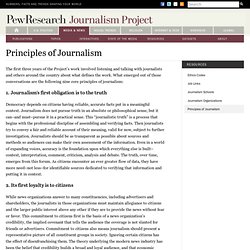 What emerged out of those conversations are the following nine core principles of journalism: 1. Journalism’s first obligation is to the truth Democracy depends on citizens having reliable, accurate facts put in a meaningful context. Journalism does not pursue truth in an absolute or philosophical sense, but it can–and must–pursue it in a practical sense. 2. While news organizations answer to many constituencies, including advertisers and shareholders, the journalists in those organizations must maintain allegiance to citizens and the larger public interest above any other if they are to provide the news without fear or favor. 3.

Does journalism need a new ideology? - What is the hallmark of good journalism? 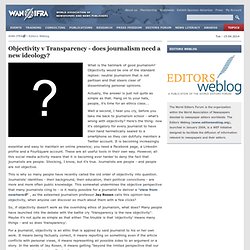 Objectivity would be one of the standard replies: neutral journalism that is not partisan and that steers clear of disseminating personal opinions. Actually, the answer is just not quite as simple as that. Hang on to your hats, people, it's time for an ethics class... Wait a second, I hear you cry, before you take me back to journalism school - what's wrong with objectivity? Objectivity vs. Obligation. Photo by Chris Johnson.© Last year, while covering the U.S. presidential election, I definitely entered territory that was unfamiliar to me as a journalist. 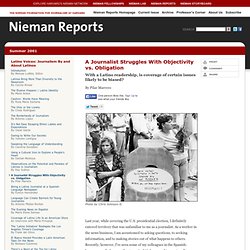 As a worker in the news business, I am accustomed to asking questions, to seeking information, and to making stories out of what happens to others. Recently, however, I’ve seen some of my colleagues in the Spanish-language media become the story. Why have we become a story? Journalists are not supposed to be activists. As an immigrant from Venezuela and a journalist working for La Opinión, a Spanish-language newspaper, I confront very different dilemmas than those of my Latino counterparts who work in mainstream media. FOX News, confusing for journalists. This is a confusing time for journalism students. 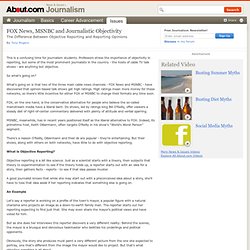 Professors stress the importance of objectivity in reporting, but some of the most prominent journalists in the country - the hosts of cable TV talk shows - are anything but objective. So what's going on? What's going on is that two of the three main cable news channels - FOX News and MSNBC - have discovered that opinion-based talk shows get high ratings. High ratings mean more money for these networks, so there's little incentive for either FOX or MSNBC to change their formats any time soon. FOX, on the one hand, is the conservative alternative for people who believe the so-called mainstream media have a liberal bent. MSNBC, meanwhile, has in recent years positioned itself as the liberal alternative to FOX. There's a reason O'Reilly, Olbermann and their ilk are popular - they're entertaining. Has journalism changed?

The following is cross-posted from a guest post I wrote for Wannabe Hacks. 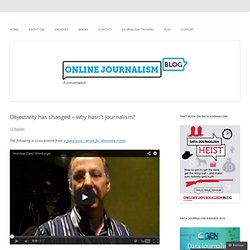 Objectivity is one of the key pillars of journalistic identity: it is one of the ways in which we identify ourselves as a profession. But for the past decade it has been subject to increasing criticism from those (and I include myself here) who suggest that sustaining the appearance of objectivity is unfeasible and unsustainable, and that transparency is a much more realistic aim. Questioning Journalistic Objectivity. Journalism, as we've known it, has been mourned deeply over the last few years. 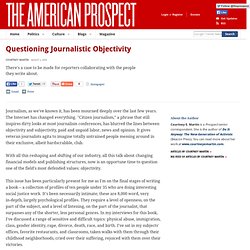 The Internet has changed everything. "Citizen journalism," a phrase that still inspires dirty looks at most journalism conferences, has blurred the lines between objectivity and subjectivity, paid and unpaid labor, news and opinion. It gives veteran journalists agita to imagine totally untrained people messing around in their exclusive, albeit hardscrabble, club. With all this reshaping and shifting of our industry, all this talk about changing financial models and publishing structures, now is an opportune time to question one of the field's most defended values: objectivity. The Myth of Objectivity in Journalism. Objectivity in Journalism. DAVID BROOKS There is some dispute about whether objectivity can really exist. 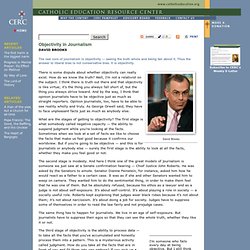 How do we know the truth? Well, I’m not a relativist on the subject. Public journalism problems.