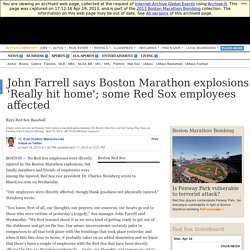 Charles Steinberg wrote to MassLive.com on Wednesday. "Our employees were directly affected, though thank goodness not physically injured," Steinberg wrote. “You know, first of all, our thoughts, our prayers, our concerns, our hearts go out to those who were victims of yesterday’s tragedy," Sox manager John Farrell said Wednesday. "We first learned about it as we were kind of getting ready to get out of the clubhouse and get on the bus. Our minor inconvenience certainly pales in comparison to all that took place with the bombings that took place yesterday and when it hits this close to home, it probably takes on an added dimension and we know that there’s been a couple of employees with the Red Sox that have been directly affected by this (as Steinberg explained) ... John Farrell says Boston Marathon explosions 'Really hit home'; some Red Sox employees affected. 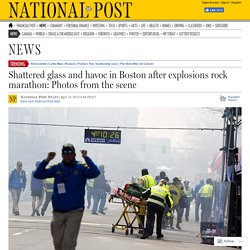 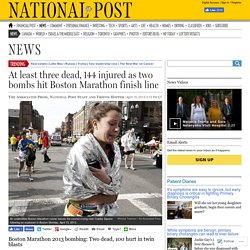 But as the FBI took charge of the investigation, authorities shed no light on a motive or who may have carried out the bombings, and police said they had no suspects in custody. The fiery twin blasts took place about 10 seconds and about 100 yards apart, felling athletes, spewing smoke and debris into the air and killing at least three people, including an eight-year-old boy. Third Boston bombing victim identified as Chinese student Lu Lingzi. A Chinese student has been identified as the third person to have died in the Boston marathon bombings. 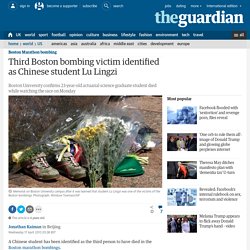 Boston University confirmed that a statistics student, Lu Lingzi, 23, died when she was watching the race on Monday. China's state newswire Xinhua said she been watching the race with two friends when the bombs detonated. The report did not reveal her full name, citing relatives' requests for anonymity. Yet internet users on the popular microblogging site Sina Weibo have identified the girl and transformed her profile page into a de facto memorial. Her last post – published at 9am on Tuesday morning – has racked up almost 23,000 comments, flush with flickering candle emoticons and interspersed with flustered entreaties to honor her family's request. "My wonderful breakfast! " President Obama's statement on the Boston marathon explosions – full text. 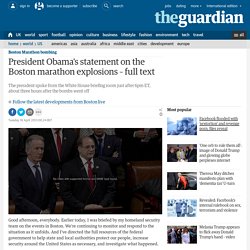 Earlier today, I was briefed by my homeland security team on the events in Boston. We're continuing to monitor and respond to the situation as it unfolds. And I've directed the full resources of the federal government to help state and local authorities protect our people, increase security around the United States as necessary, and investigate what happened. The American people will say a prayer for Boston tonight. And Michelle and I send our deepest thoughts and prayers to the families of the victims in the wake of this senseless loss. Obama hails Boston as 'one of the world's great cities' at memorial. Barack Obama delivered a defiant message to the perpetrators of the Boston Marathon bombing on Thursday, declaring that if their intention was to "intimidate us, to terrorize us, to shake us from the values that make us who we are as Americans" then they had "picked the wrong city". 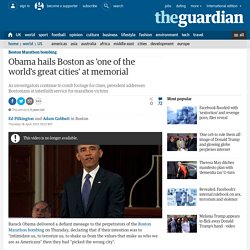 In an address at the Cathedral of the Holy Cross in the South End of Boston, just 13 blocks away from the site of Monday's carnage, Obama was at times sombre, at times almost tearful. But the thrust of his reflection was uncompromising – that violence would not overcome the spirit of what he described as "one of the world's great cities". He derided those who planted two bombs close to the finishing line of the marathon where the devices would be certain to cause most human devastation as "small, stunted individuals who would destroy rather than build, and think that somehow that makes them important". But none of that stopped her coming to the service. President Obama to Boston: ‘We will finish the race’ Boston Bomb Suspect Clings to Life. The man whose brief life on the lam paralyzed Boston clung to life today as investigators waited for a chance to ask him why he and his brother attacked the Boston Marathon. 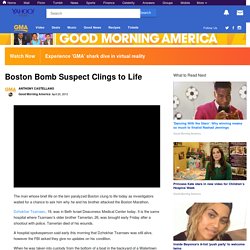 Dzhokhar Tsarnaev, 19, was in Beth Israel Deaconess Medical Center today. It is the same hospital where Tsarnaev's older brother Tamerlan, 26, was brought early Friday after a shootout with police. Tamerlan died of his wounds. A hospital spokesperson said early this morning that Dzhokhar Tsarnaev was still alive, however the FBI asked they give no updates on his condition. When he was taken into custody from the bottom of a boat in the backyard of a Watertown home Friday night, the suspect was bleeding badly and too weak to resist any longer, officials said. Police believe Dzhokhar Tsarnaev he was initially wounded Thursday night in the gunbattle that killed his brother. It is unclear whether Tsarnaev was hit again during a final volley before his arrest in the boat. 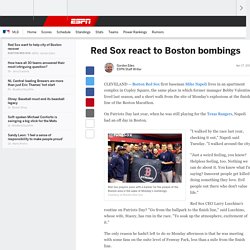 Boston Marathon Suspect Dead, Another at Large After Standoff. Gawker. Up until last week, "One Direction Infection," a Tumblr blog created and maintained by an eighth grader we'll call Claire, looked like any other 14-year-old's Tumblr: a bright pink background, a default font that resembles cute handwriting, an embedded MP3 player playing Daddy Yankee and Jesse McCartney, and scores of photographs and animated GIFs of the members of One Direction, Britain's biggest boy band. 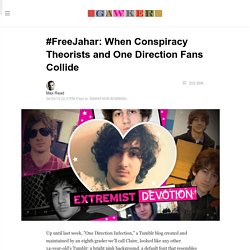 It still looks like that, mostly—same background, same font, same Justin Timberlake song on the music player—but over the weekend Claire's subject matter took a sharp turn. In place of candid shots of Harry Styles and Zayn Malik, there are now photos of accused Boston Marathon bomber Dzhokhar Tsarnaev; instead of inspirational image macros, there are annotated crime scene photos. The precocious, self-concious tone remains, and when you visit your browser still reads "One Direction Infection," but the blog has a new URL: But #FreeJahar resists describing itself as a "fandom. " ‘Misha’ Found, Cooperating With Boston Marathon Bombing Investigators « CBS Boston. BOSTON (CBS) – “Misha,” the mysterious man linked to Boston Marathon bombings suspect Tamerlan Tsarnaev, has been located in Rhode Island. 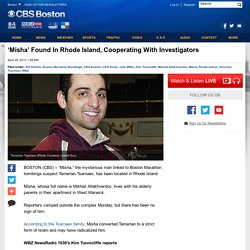 Misha, whose full name is Mikhail Allakhverdov, lives with his elderly parents in their apartment in West Warwick. Reporters camped outside the complex Monday, but there has been no sign of him. According to the Tsarnaev family, Misha converted Tamerlan to a strict form of Islam and may have radicalized him. WBZ NewsRadio 1030’s Kim Tunnicliffe reports <h3 class="title">Misha In Rhode Island</h3><div class="description"></p><audio class="td-sdk" title="Misha In Rhode Island" controls preload="auto"><source src=" type="audio/mpeg"></audio> Misha told the New York Review of Books he did know Tamerlan, but he had not spoken to him in three years. He also said he never met the family members who accused him of radicalizing Tamerlan, but he would not describe the nature of their relationship. “I wasn’t his teacher. Dzhokhar Tsarnaev’s interrogation: His Miranda warning shouldn’t have taken 16 hours. - Slate Magazine.

Photo provided by FBI via Getty Images According to the AP, Dzhokhar Tsarnaev answered questions for 16 hours before he was read the Miranda warning that he could remain silent and could ask for a lawyer. Once Tsarnaev was told that, he stopped talking. Dzhokhar Tsarnaev’s requests for lawyer were ignored. Updated, 11:42 a.m. EST: In attempts to further flesh out a picture of the Tsarnaevs, investigators have reportedly discovered that the elder brother, Tamerlan, killed in a police shootout, may have had links to two now-dead militants in Russia.

Via New York Magazine: According to the newspaper Novaya Gazeta, Tsarnaev may have been linked to William Plotnikov, a Canadian “boxer-turned-jihadist” (sounds familiar) who died at the hands of Russian forces in the republic of Dagestan last year, while Tsarnaev was visiting…Tsarnaev may have also known, or chatted online, with Makhmud Mansur Nidal, an 18-year-old militant who was reportedly “under surveillance for six months as a suspected recruiter for Islamist insurgents fighting Moscow’s rule in the region.” Nidal was also killed in Russia, in May 2012 during Tamerlan’s six-month visit Investigators found female DNA on a fragment from one of the bombs, another U.S. official briefed on the probe said yesterday. How Tsarnaev's Friends Allegedly Hid Boston Bombing Evidence: The Timeline - Philip Bump - The Atlantic Wire. This article is from the archive of our partner According to the criminal complaints filed against the three new suspects in the Boston bombing case, here's how they became involved in the entire affair.

The information that follows is based on the full complaints for Dias Kadyrbayev and Azamat Tazhayakov, and for Robel Phillipos, which appear to be largely the same, as well as some incoming information on the three new suspects and from the ongoing investigation. Prior to the bombings Tsarnaev was the only one of the four that had a dorm room on the campus of UMass Dartmouth, though he apparently also spent time with his brother Tamerlan in Cambridge. Kadyrbayev and Tazhayakov lived together in an apartment off-campus; Phillipos also lived off-campus. All four started at the school in 2011. Uncle: Tamerlan Tsarnaev buried in Virginia cemetery - CNN.com. The body of one of the two men accused of pulling off the Boston Marathon attack has been buried in rural Virginia -- a development that local officials said caught them totally "off guard.