The Health and Fitness Industry

Facts & Statistics - President's Council on Fitness, Sports & Nutrition. 2015 State of the UK Fitness Industry Report Published Yesterday — The Leisure Database Company. Number of UK Fitness Members in London exceeds 1.5 million for the first time - 5.8% rise in total membership and 5.4% rise in market value - Total market value now estimated to be £4.3 billion The 2015 State of the UK Fitness Industry Report reveals that the UK health and fitness industry is in good health, it has more clubs, more members and a greater market value than ever before. 1 in every 8 people in the UK are members of a gym, an all-time penetration rate high of 13.7%. 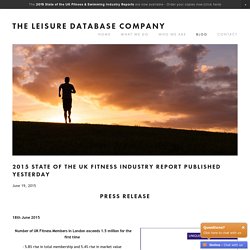 The 2015 report highlights that the industry has experienced another year of positive growth over the twelve month period to the end of March 2015, with increases of 5.4% in value, 3.3% in the number of fitness facilities and a 5.8% rise in the number of members. The growth in the industry continues to be driven by strong performance from the rapidly growing low cost market in the private sector.

Summary of Key Facts - Ends - Notes Further Information: The Health and Fitness Industry Is Dead. And That Includes You, Paleo. - Rebooted Body. This is a free limited time download. 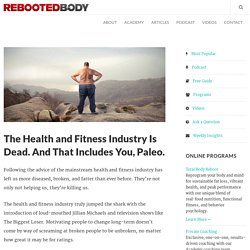 There are 10 critical errors that will prevent you from getting a body and life you love. Learn what they are and put a stop to them. 2015 State of the UK Fitness Industry Report Published Yesterday — The Leisure Database Company. Health and Fitness Industry Guide. 2014 Fitness Press Release — The Leisure Database Company. 4th June 2014 Number of UK Fitness Members exceeds 8 million for the first time - 4.5% rise in total membership and 3.9% rise in value - Total market value now estimated to be £4.08 billion The 2014 State of the UK Fitness Industry Report reveals that the UK health and fitness industry has more clubs, more members and a greater market value than ever before. 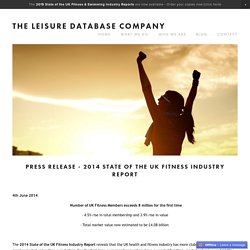 For the first time ever, member numbers have exceeded 8 million, market value is over £4 billion and the penetration rate is at an all time high of 13.2%. For the Activewear Market, There’s No Way But Up. NEW YORK, United States — Wearing gym clothes beyond the gym has never looked more appropriate. 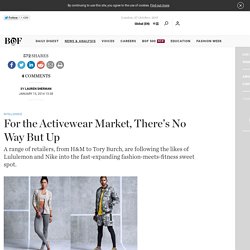 Indeed, in many of the world’s style capitals, it’s difficult not to notice the rise of the post-workout look. Yoga pants are no longer restricted to yoga class; instead, they’re worn with a fancy fur vest for lunch with friends or a visit to Wholefoods. Sporty moisture-wicking zip-up jackets are layered between wool coats and cashmere sweaters. Even at fashion weeks on both sides of the Atlantic, Nike’s woven Flyknit running shoes, paired with trousers or flippy skirts, are amongst the most popular accessories in sight. In the 1980s, the aerobics craze spurred people to sport sweatbands, bodysuits and legwarmers outside of class. A 2012 study conducted by the highly respected, San Francisco-based publication Yoga Journal estimates that 20.4 million Americans practice yoga, a 29 percent increase from 2008, when 15.8 million were attending classes.

Australians Spend Big On Fitness. 8 January 2015 Australians spend $8.5 billion each year on gym memberships, sports equipment and the latest fitness trends, yet 2.9 million Australian households fail to incorporate the expense into their budgets, according to research released today from Suncorp Bank. 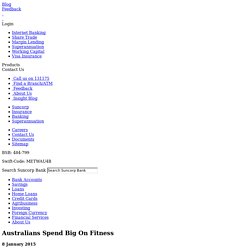 The Suncorp Bank Cost of Being Fit Report, the latest in Suncorp Bank’s Cost of Living Series, found 56 per cent of Australian households are unaware they contribute $2,340 each year to the nation’s billion dollar fitness industry. The revelation comes at a time when more than six million Australians revealed they have made a 2015 resolution to make fitness top of mind, with one in four committed to spending more in the New Year to achieve their fitness goals. Suncorp Bank Regional Manager, Michelle Bagnall, said the average Australian is spending close to $1,000, or $75 a month on fitness activities, yet many fail to incorporate the expense into their budget. Key findings: Australia’s 10 most popular fitness activities2.