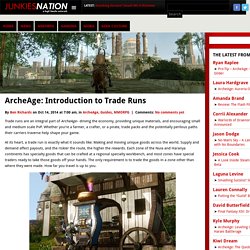 Whether you’re a farmer, a crafter, or a pirate, trade packs and the potentially perilous paths their carriers traverse help shape your game. At its heart, a trade run is exactly what it sounds like: Making and moving unique goods across the world. Supply and demand affect payouts, and the riskier the route, the higher the rewards. Each zone of the Nuia and Haranya continents has specialty goods that can be crafted at a regional specialty workbench, and most zones have special traders ready to take those goods off your hands. The only requirement is to trade the goods in a zone other than where they were made. The Rewards Gold Traders Most zones have a Gold Trader NPC that will take your trade pack from another zone. Of the three traders, though, they’re the only ones interested in domestic goods. Gilda Star Traders Resource Traders.

Efficient way to get pelts/leather : archeage. Thunderstruck Tree Guide – UPDATED. They are probably the most desirable item in the game. 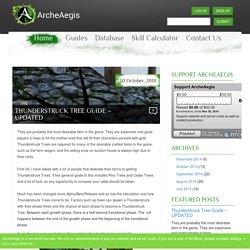 They are expensive and gives players a hope to hit the mother-load that will fill their characters pockets with gold. Thunderstruck Trees are required for many of the desirable crafted items in the game, such as the farm wagon, and the selling price on auction house is always high due to their rarity. First off, I have talked with a lot of people that dedicate their farms to getting Thunderstruck Trees. Their general guide to this includes Pine Trees and Cedar Trees and a lot of luck, so any opportunity to increase your odds should be taken. Much has been changed since Alpha/Beta/Release and so has the calculation and how Thunderstruck Trees come to be. Free ArcheAge Leveling GuideArcheage Leveling Guide. ArcheAge MMO Mobile Version Announced: Developer XL Games Partners With GAMEVIL, Bringing Game To iOS And Android? (XL Games / Trion Worlds) The popular F2P MMO is coming to mobile devices in the future. 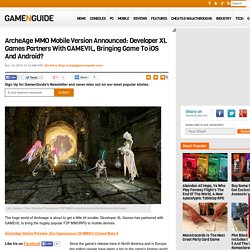 The huge world of Archeage is about to get a little bit smaller. Developer XL Games has partnered with GAMEVIL to bring the hugely popular F2P MMORPG to mobile devices. Breezy Bungalow / Marine House - What do i need to know before i dump 300 gilda stars on the design? : archeage. ArcheAge Farming Guide - Efficient Tree Planting and Placement - ArcheAge. By Ashley SSS Like it or not, growing trees is an integral part of your farming time in ArcheAge. 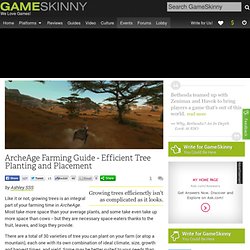 Most take more space than your average plants, and some take even take up more space than cows -- but they are necessary space-eaters thanks to the fruit, leaves, and logs they provide. There are a total of 30 varieties of tree you can plant on your farm (or atop a mountain), each one with its own combination of ideal climate, size, growth and harvest times, and yield. [Guide] Treasure Hunting - East and West Borrowing Company - Beta - ArcheAge - Guild Hosting - Guild Launch. As the Release Date (and all the betas before that) come closer, i figured i'll give all the chaps here some info about being the coolest person sailing the sea (No we're not talking about you, Midget): A Treasure Hunter! 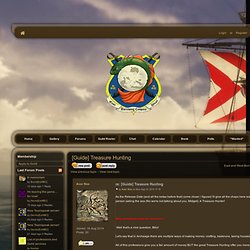 Why should you hunt for treasure? Well that's a nice question, Billy! Let's say that in Archeage there are multiple ways of making money: crafting, traderuns, taxing houses, farming like a paesant..... All of this professions give you a fair amount of money BUT the great Treasure Hunting offer you more: Profit: Call it booty, call it money, call it cash.....the usual stuff.Adventure: 'Cause sailing the sea, diving into the ocean like a little mermaid/man, avoiding krakens seems like adventorous to me.Danger: As i said, Kraken, underwater mobs, pirates, untimely death..... That said, Treasure Hunting has its dropbacks, mainly because the gain is not certain E.G. Trade Profit Calculator. What should I grow for quick money? : archeage. Lunagems & Lunastones - ArcheAge Wiki Guide. Lunagems Lunagems are socketed gems that can applied to your gear. 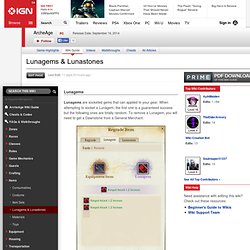 When attempting to socket a Lunagem, the first one is a guaranteed success but the following ones are totally random. To remove a Lunagem, you will need to get a Dawnstone from a General Merchant. Lunastones / Lunafrosts Lunastones are enchants that can be applied to your gear. [Nuia] Gilda Stars: A Brief Guide : archeage. How to quickly convert Labor into Exp and simultaneously power level Leatherworking, Tailoring or Metalworking - Man of Legends. Introduction and Basics Hey! 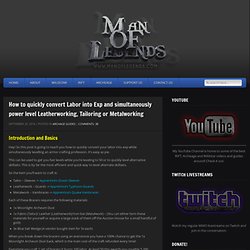 So this post is going to teach you how to quickly convert your labor into exp while simultaneously levelling an armor crafting profession. It’s easy as pie. The One Level 50 Guide - The Ultimate Guide to Archeage Endgame - Man of Legends. Introduction: If you’re reading this you’ve probably just hit max level in Archeage! 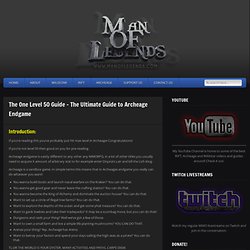 Congratulations! If you’re not level 50 then good on you for pre-reading. Archeage endgame is vastly different to any other any MMORPG, in a lot of other titles you usually need to acquire X amount of arbitrary stat to for example enter Onyxia’s Lair and kill the Lich King. Definitive Thunderstruck Ratio Data. Armoured'Up: Gearing up For 50 - Archeage Daily. This guide is going to be created for people over the level of 46 and want to prepare for level 50. 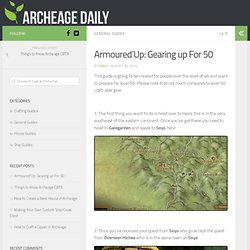 Please note that not much compares to level 50 craft-able gear. 1. The first thing you want to do is head over to Hasla this is in the very southeast of the eastern continent. Here are all the Fishing Quests : archeage. Trade-routes.jpg (JPEG Image, 1736 × 718 pixels) - Scaled (58%) Auroria, The Promised Land : archeage. ArcheAge Bot Fighting and Free2play Tips iMMOsite - Get your gaming life recorded. ArcheAge - Farming, Stealing and You. By raptorakDate: Aug 16 2014 Views: 24090 13 Responses Your Reaction? 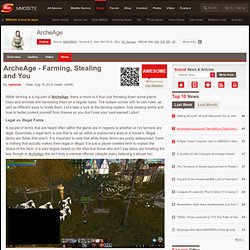 While farming is a big part of ArcheAge, there is more to it than just throwing down some plants, trees and animals and harvesting them on a regular basis. The system comes with its own rules, as well as different ways to break them. Benefits for leveling up professions: Everything I know : archeage. Archeage - Third Continent (Land of Origin) and Castle Siege. I have a crafting question. Larceny and Specialization Snowflake : archeage. ArcheAgeStatus.com - ArcheAge Server Status Monitoring. Ways of the Farmer: A Guide to Farm Wagons. The Farm Wagon, also referred to as a tractor, is a vehicle in ArcheAge that all traders should aspire to build at some point. It provides a significant boost in efficiency by allowing you to carry multiple trade packs at once and even at a faster pace than a Donkey, especially if you use fuel to boost your speed.

In this guide I am going to cover absolutely everything you need to know about getting a tractor and building it. To begin, you can’t build a Farm Wagon without the required design! You can purchase the design in Mirage Isle, you can teleport there using the portals found near auctioneers. At the time of this guide you can purchase the Farm Wagon Design for 50 Gilda Stars. Once you have acquired the recipe we can now start to look at materials. The first thing you will need is 4 Strong Wheels but luckily you get 2 each time you craft them.

Strong Wheel. Jeon Min-hee. List of novels[edit] The Arund Chronicles[edit] 1999–2000 The Stone of Days was published by Consonants and Vowels (자음과 모음), in 10 parts.2000–2001 The Tower of the Sun was published by Consonants and Vowels up to book 5, then was canceled by cover illust plagiarism of Publisher Company.2004–2005 The Stone of Days was edited and republished in eight parts by Zeu Media.2009– The Tower of the Sun is being edited and being republished by Zeu Media. The Children of the Rune Chronicles[edit] Completed list of dailies for Gilda Stars. : archeage. [Guide] Hasla Weapons. In Cod We Trust: A Guide to Fishing. You can start your adventures in fishing by picking up a quest from Fisherman Santiago in Ezna harbor at Two Crowns or from Fisherman Riko at Lutesong Harbor Villanelle. This quest will guide you through the process of crafting your first fishing rod. The first fishing rod is made from bamboo and has a duration of 3 days once unwrapped.

If you leave the crafted fishing rod unwrapped in your bags then it will last indefinitely. To craft a fishing rod you will require a handicraft workbench which can be found in most cities. Below I have broken down the materials needed so that you can easily gather them. Bamboo Fishing Pole Frame For this item you need: 10x Bamboo Stalk and 2x Fabric. Trade Packs with the Multi-Purpose Aging Larder. During your exploration in ArcheAge you may have come across something like the picture below and wondered what the heck it was and what it does. What you see in the picture above are Multi-Purpose Aging Larders. They are crafted at a Farmer’s Workstation and serve the purpose of aging materials over a period of a few days. After they have aged they can be converted in to trade packs. In order to craft a Multi-Purpose Aging Larder you need a Farmer’s Workstation.

If you don’t have one already, a Farmer’s Workstation is crafted at a carpentry workbench and requires a Scarecrow Garden Design, 30 Lumber and 1 Vicious Glossy Oil. At your Farmer’s Workstation press F to open the crafting menu. The required materials are: ArcheAge Instance Drops. ArcheAge – Russian players launch petition against payment model. Europe Published on October 2nd, 2013 | by cinderboy Share on Facebook44Share on Twitter0Share on Google Plus1Share on Reddit0Share on LinkedIn0Share on Vkontakte0Share on Pinterest0 [Petition] In a media presentation held on 28th September, Russia’s biggest MMO publisher, Mail.ru, revealed the payment model for ArcheAge Russia.

How To Build The Most Powerful ArcheAge Black Pearl Ship Fast. As we all know, Archeage is a huge online game, one of the most important transportation is using ship.To cross the sea to finish the business and do quest, you need to build ship which will allow you to travel faster. ArcheAge: Bear Breeding Tutorial. Become the Bees Knees: A Guide to Bee Keeping. I have had 14 bee hives at one point and constantly gt asked the question why? Translate. ArcheAge - Efficient Tree Logging. ArcheAge: Bear Breeding Tutorial. Apex - View topic - How to run multiple clients on 1 computer?

Ok, I will cut this in sections as it will be a pretty long story to tell. 1. Hardware2. Software3. Virtualization4. Trade Profit Calculator. Boats! (Guide) Fido's The Crop Report v2.0 - The Basics of Agriculture - New Articles & Guides - ArcheAge Source. I'll be translating and formatting Fido's original article in German which can be found here. Its a huge article and very detailed so give me some time The Crop Report v2.0 - The Basics of Agriculture Originally produced by Fido. New Guide - Harvesting by Rajch, Violet, Miz0pa, unknown.

ArcheAge Codex. Basic informations about ArcheAge. Choose from the list below for details.For advanced, player written guides check out Game Guides menu. About The Game. Armor - It works a little different in Archeage. The Farming Timer for ArcheAge. Change the way you use GPS for field mapping and scouting applications in agriculture.

Hotkeynet is also good, but you need to take the time to figure out your scripts. I run hotkeynet and use the server commands so that its not on same machine. #1 no matter what your machine is, boxing is cleaner with a server/client setup. #2 hotkeynet works awesome for this. Archeage how and when you’ll get the good stuff - [ZeGa] Zero Gaming. Where/When do I get my first mount? Trading Pack - Archeage Wiki - ArcheageDB.