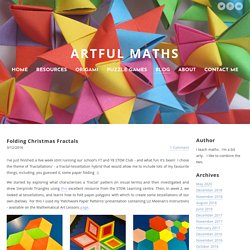 I chose the theme of 'fractallations' - a fractal-tessellation hybrid that would allow me to include lots of my favourite things, including, you guessed it, some paper folding :) We started by exploring what characterises a 'fractal' pattern (in visual terms) and then investigated and drew Sierpinski Triangles using this excellent resource from the STEM Learning centre. Then, in week 2, we looked at tessellations, and learnt how to fold paper polygons with which to create some tessellations of our own (below). For this I used my 'Patchwork Paper Patterns' presentation containing Liz Meenan's instructions - available on the Mathematical Art Lessons page. 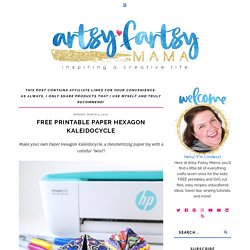 Before there were fidget spinners, there were kaleidocycles. Also called flextangles, kaleidocycles are a fun, hexagonal origami project for kids of all ages to color, assemble, and turn. And turn. And turn! No two kaleidocycles are alike, and you’re sure to be mesmerized by the colorful patterns for hours.This post contains affiliate links for your convenience. Download the Free Printable Kaleidocycle Template file and print it out on cardstock. Color in the patterns using markers or colored pencils. Relation of a cylinder to a prism - Math Open Reference. A prism is a solid with bases that are polygons and the sides are flat surfaces. 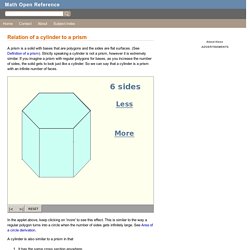 (See Definition of a prism). Strictly speaking a cylinder is not a prism, however it is extremely similar. If you imagine a prism with regular polygons for bases, as you increase the number of sides, the solid gets to look just like a cylinder. Platonic Solids - Why Five? A Platonic Solid is a 3D shape where: each face is the same regular polygon the same number of polygons meet at each vertex (corner) There are only five of them ... why? 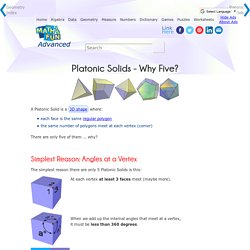 Simplest Reason: Angles at a Vertex The simplest reason there are only 5 Platonic Solids is this: At each vertex at least 3 faces meet (maybe more). When we add up the internal angles that meet at a vertex, it must be less than 360 degrees. Because at 360° the shape flattens out! Level 5 6 place value menu march 2015. STEM Mathematician Poster for Elementary [someone who] by Kaitlynn Albani. You are a mathematician poster! 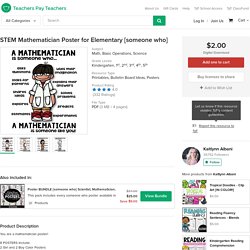 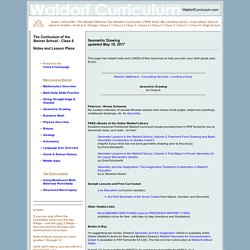 Pinterest. How to Make A Spiral from the Pythagorean Theorem. One of geometry's virtues, from a teacher's perspective, is that it's highly visual. 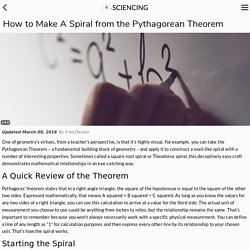 For example, you can take the Pythagorean Theorem – a fundamental building block of geometry – and apply it to construct a snail-like spiral with a number of interesting properties. Sometimes called a square root spiral or Theodorus spiral, this deceptively easy craft demonstrates mathematical relationships in an eye-catching way. A Quick Review of the Theorem Pythagoras' theorem states that in a right-angle triangle, the square of the hypotenuse is equal to the square of the other two sides. 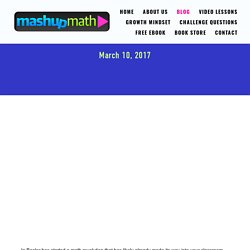 When students work with symbols, such as numbers, they are using a different area of the brain than when they work with visual and spatial information, such as an array of dots. The researchers found that mathematics learning and performance was optimized when the two areas of the brain were communicating. Boaler goes on to say that "Mathematics is a subject that allows for precise thinking, but when that precise thinking is combined with creativity, openness, visualization, and flexibility, the mathematics comes alive.

" Yup, this just happened. #mathchat… Multiple Digit Multiplication Worksheets. The Math Learning Center. Teach Your Kids to Multiply Using Area Models. How to Easily Memorize the Multiplication Table I The Great Courses. Easy Picross Puzzles. Beautiful math of fractals. (PhysOrg.com) -- What do mountains, broccoli and the stock market have in common? 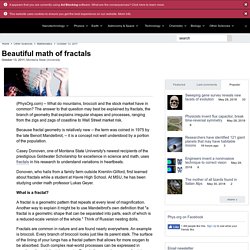 The answer to that question may best be explained by fractals, the branch of geometry that explains irregular shapes and processes, ranging from the zigs and zags of coastline to Wall Street market risk. Because fractal geometry is relatively new -- the term was coined in 1975 by the late Benoit Mandelbrot, -- it is a concept not well understood by a portion of the population. Casey Donoven, one of Montana State University's newest recipients of the prestigious Goldwater Scholarship for excellence in science and math, uses fractals in his research to understand variations in heartbeats. 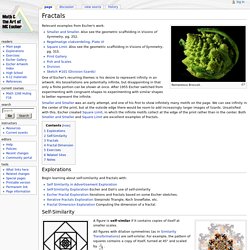 Relevant examples from Escher's work: One of Escher's recurring themes is his desire to represent infinity in an artwork. His tessellations are potentially infinite, but disappointing in that only a finite portion can be shown at once. After 1955 Escher switched from experimenting with congruent shapes to experimenting with similar shapes to better represent the infinite. Smaller and Smaller was an early attempt, and one of his first to show infinitely many motifs on the page. Self-Similarity Exercises - EscherMath. Escher prints: Discuss the symmetries of Whirlpools (Visions of Symmetry, p. 250). Discuss the symmetries of Smaller and Smaller (Visions of Symmetry, p. 253). For each part, describe all symmetries: The golden triangle spiral. This crop circle, found May 21, 2003 in Wiltshire, England. This drawing of calcarina clavigera, a microorganism. What Is A Fractal (and what are they good for)? Beautiful math of fractals.

Fractal Triangle – Fractal Foundation. Resources for Primary and Secondary Students - ABC Education. Math Worksheets Printable from the Math Salamanders. Worksheet maths puzzle math fun worksheets. Worksheet fun multiplication and division worksheets maths. Clapping Times. For this activity, you'll need to work with a partner, so the first thing to do is find a friend! Together count from up to , clapping on each number, but clapping more loudly and speaking loudly on the numbers in the two times table, and quietly on the other numbers. Now clap the five times table together up to about , so this time you are clapping more loudly and speaking loudly on the multiples of five and quietly on the others.

If one of you claps the twos in this way and one of you claps the fives, at the same time, can you predict what you would hear? ☆ Learn to evaluate expressions using algebra tiles. Printable Manipulatives. Sudoku Printables - FREE Printable Sudoku Puzzles PDF. Questions? Email us! Info@elversonpuzzle.com. LKS2 The Mystery of the Missing Sacks on Sports Day Maths Game. Multiplying 3 Digit by 1 Digit Numbers Code Hunter. 2 Times Table Fortune Teller.

Edutopia. A math trail is an activity that gets students out of the classroom so they can (re)discover the math all around us. Whether out on a field trip or on school grounds, students on a math trail are asked to solve or create problems about objects and landmarks they see; name shapes and composite solids; calculate areas and volumes; recognize properties, similarity, congruence, and symmetry; use number sense and estimation to evaluate large quantities and assess assumptions; and so on. 13 STEM Fiction Books Your Kids will Actually Enjoy Reading This Summer. Math Fun: Take any four digit number, follow these steps, and you'll end up with 6174. #mathchat… Why You Should Be Using WODB to Ignite Student Thinking in Math. Student A says: I think 27 doesn’t belong because it is the only value that is not divisible by four. Also, 27 is the only odd number in the group. The students loved the jelly bean math today @mashupmath…

Are You Using This Genius Strategy for Math Writing? Where does the brain do math? - CIFAR : CIFAR. Teaching Math Without Words – TeachThought. A fun way to review vocabulary in any KLA! #acuedu_p… Are You Ready for 17 Awesome New Math Challenges? Can you solve the two-jars puzzle? ✍️… Problem-based learning in Math: Learning through problems, direct teaching only as needed, letting Ss do the thinking! #3ActMath #prbl #mtbos #iteachmath #bfc530… Posters Archives. Can you solve this 360-degree VR math puzzle activity? GrowthMindsetPoster. This 12-year-old solves three Rubik's Cubes while juggling them.

It is estimated that less than 5.8 percent of the world's population can solve the Rubik's Cube. But one boy in China can solve three -- while juggling them -- in 5 minutes, 6 seconds. 12-year-old Que Jianyu demonstrated this talent last December on the set of Dream of China, a Chinese reality talent show, local news and entertainment site Shanghaiist reported on its Facebook page on Tuesday. Christmas came early for the boy that day, when two judges from the Guinness World Records who were also present gave him recognition for the fastest time recorded solving three Rubik's Cubes while juggling them. It's not the first time Que has been awarded the GWR. Maths s3 sampleu1. Resources. The Numeracy skills framework website contains assessment resources to assist teachers accurately identify the skills, knowledge and understanding of students.

They are intended to be a diagnostic snapshot of the key ideas and concepts from the NSW Mathematics K–10 Syllabus (PDF 7.84MB). K–6 Mathematics. View details - Scootle. Index. Let’s Make a 3D HAND… or Who’s Hiding Under the Blanket? Möbius Magic Strip. Тhis strip has only one edge and one surface. The notions of left and right are meaningless here. OP-ART – in Black Pen and Colored Pencils. Let’s Draw ESCHER-STYLE -13 Coloring Pages. A sense of wonder at the great puzzle of nature; a rhythmic sequence of images… the feeling that everything eventually fits in – these are some of the pleasures presented by the works of the great Dutch artist Maurits Escher (1898-1972).