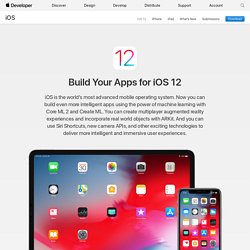 » 10 Most Popular Apple Products In History. Apple’s co-founder Steve Jobs never took engineering degree from any university but still considered as most creative mind in the world of Technology today. 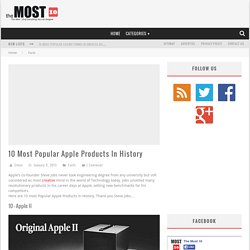 Jobs unveiled many revolutionary products in his career days at Apple, setting new benchmarks for his competitors. Here are 10 most Popular Apple Products In History. Thank you Steve Jobs… Differences Between Infrared & Bluetooth. How it Works. What is 4G? A complete guide to 4G. You've probably heard of it, but what is 4G? 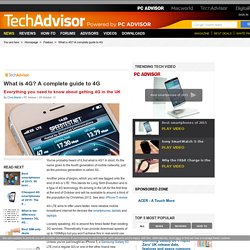 In short, it's the name given to the fourth generation of mobile networks, just as the previous generation is called 3G. Another piece of jargon, which you will see tagged onto the end of 4G is 'LTE'. This stands for Long Term Evolution and is a type of 4G technology. Google Android 4.2.2 Jelly Bean; Google Android 4.2.2 'Jelly Bean' Android 4.2.2 "Jelly Bean" is Google's latest refinement of what is now the world's most popular OS on new smartphones. 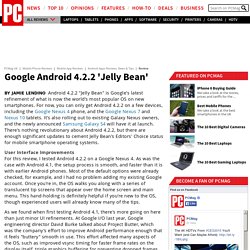 As was the case with Android 4.1, the setup process is smooth, and faster than it is with earlier Android phones. History. Phones. Samsung Galaxy S4: Hardware and software specs, dimensions, and what we know so far. In the lead up to the official launch of the Galaxy S4 tonight in New York, a series of leaks from China mean that we now know almost all of the hardware and software specs of Samsung’s new superphone. 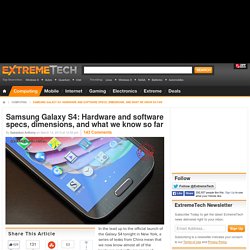 The Galaxy S4 will have a 4.99-inch display, an eight-core Exynos Octa 5410 SoC, and interesting new software features such as SmartPause and floating touch. We also know the dimensions and weight, and the battery size. Updated: The Samsung Galaxy S4 has now been officially unveiled. Galaxy S4 drop test shows Corning's Gorilla Glass 3 is still not impact resistant. For all the competition that's happening in the smart-device market there's only one company that OEMs turn to when they want a really tough glass screen: Corning. 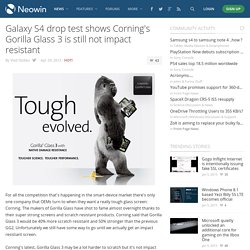 What is Polycarbonate? (with pictures) What is Super AMOLED? - Definition. Featured Mobileburn Video Our online glossary is here to help you make sense of the terminology used in the cell phone industry. 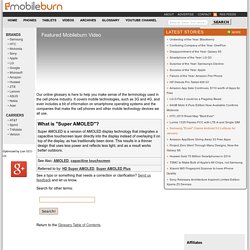 It covers mobile technologies, such as 3G and 4G, and even includes a bit of information on smartphone operating systems and the companies that make the cell phones and other mobile technology devices we all use. Super AMOLED is a version of AMOLED display technology that integrates a capacitive touchscreen layer directly into the display instead of overlaying it on top of the display, as has traditionally been done. This results in a thinner design that uses less power and reflects less light, and as a result works better outdoors. See Also: AMOLED, capacitive touchscreen. Samsung Galaxy S4 Costs $237 to Build, Teardown Analysis Shows. A look inside Samung’s new high-profile smartphone, the Galaxy S4, shows that the South Korean electronics giant is using numerous components produced by its various internally owned subsidiaries. 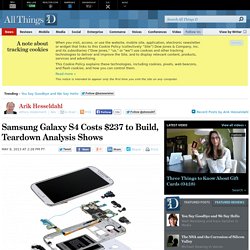 A teardown analysis conducted by the market research firm IHS, due to be released tomorrow, has pegged Samsung’s cost of materials and manufacturing to produce the U.S. version of the 32 gigabyte model of the S4 at slightly above $237 per unit. Without a contract subsidy, the entry-level 16GB version of the phone costs $639 when sold by AT&T Wireless. The cost is somewhat higher than that of Apple’s iPhone 5, the base model of which costs $205 to build for a 16GB version, according to an IHS analysis conducted last fall. Galaxy S4 Prototype. Samsung Describes Galaxy S4 As, "A Precious Stone Glittering In The Dark" A smartphone can be nothing more than just a phone. 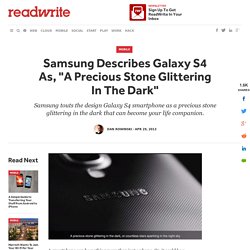 Or, it could be a companion that helps you navigate this crazy world. Samsung thinks that it has designed its newest flagship smartphone, the Galaxy S4, to be a life companion to help you with the intricacies of existence. SAMSUNG. Samsung's core technology businesses diversified and expanded globally during the late 1970s and early 1980s. 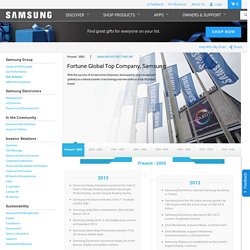 Samsung’s Smartphone History: From Zero to Galaxy S4. The maker of the upcoming Galaxy S4 smartphone has been perfecting its mobile approach for more than a decade. Here’s how. Samsung, how far you've come. Android Vs Apple Wallpapers. The History of the Smartphone. Oh memories. Nokia 5110. Winner of the Guardian' 'Off the Cuff' (Fashion) Accessory of the Year Award 1998 Date launched: 1998Network: GSM 900MhzForm: Candy barSize: 48(w)x132(h)x31(d) mmWeight: 170gCost new: £29.99 (1)Can you use it today: Yes Is a mobile phone all about communication or about fashion?

Evolution of cellphones: From 'brick' mobiles to touchscreen smartphones. It's been a while — but do you remember the time when the cellphone didn't exist? For some, it was a more uncluttered time. It was in the early '80s that the first mobile phone came about. Previous 'wireless communication systems' were too bulky to be called mobile — although many did exist for military and civilian use.

The first generation of cellphones did nothing except calls — and that too for about 30 minutes; it was all that the battery in those days allowed. FIRST CELL PHONE CALL. Have you ever wondered who made the first cell phone call? Well you don’t have to wonder anymore. His name is Dr Martin Cooper. He actually is one of the inventors of the first cell phone. The Evolution Of The Cell Phone—How Far It's Come! GALAXY S4 - Life companion. This is an image for the main page of the GALAXY S4 microsite. iPhone 5S vs Samsung Galaxy S4 specs comparison. Apple iPhone 5 vs. Samsung Galaxy S4: And the Winner Is… iPhone 5/S vs. Galaxy S4 Comparison: Samsung Beats Apple in Global Shipments in Record Q3 : Tech.

(Photo : REUTERS/Dado Ruvic) Judge Lucy Koh of the Northern District of California has ruled that Samsung infringed on an Apple patent for "autocorrect" technology. Judge Koh also ruled that Samsung patents for multimedia synchronization were invalid, giving Apple an advantage heading into the electronic giants' March 31 trail. Samsung has defeated Apple in global smartphone shipments during quarter three, according to a new Strategy Analytics study. The iPhone 5, 5S and 5C vs. Galaxy S4 battle favored Samsung for the period, which was a record breaker for highest total global smartphone shipments for a quarter. 250 million smartphones were sold, which represented a staggering 45 percent increase year-over-year. Samsung not only defeated Apple as far as shipments, but beat their American competitor by more than double thanks to reliable demand for the Galaxy S4, Note 3 and Galaxy Y.