How To Create 3D Ball in Photoshop. In this tutorial we’re going to learn how to create a 3D ball with photoshop in 8 steps. 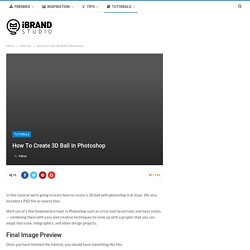 We also included a PSD file as source files. We’ll use of a few fundamental tools in Photoshop such as circle tool, brush tool, and layer styles — combining them with easy and creative techniques to come up with a graphic that you can adapt into icons, infographics, and other design projects. Final Image Preview Once you have finished the tutorial, you should have something like this. Lets get started! Step 0. How to Create a Transparent Gradient in Photoshop. 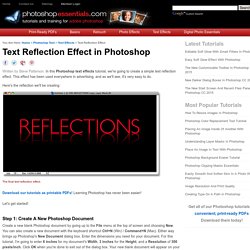 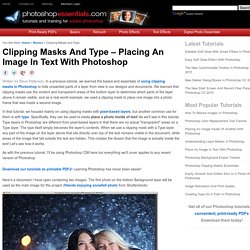 In a previous tutorial, we learned the basics and essentials of using clipping masks in Photoshop to hide unwanted parts of a layer from view in our designs and documents. We learned that clipping masks use the content and transparent areas of the bottom layer to determine which parts of the layer above it remain visible, and as a real world example, we used a clipping mask to place one image into a photo frame that was inside a second image. In that tutorial, we focused mainly on using clipping masks with pixel-based layers, but another common use for them is with type. Creating Type On A Path In Photoshop. In this Photoshop Basics tutorial, we'll learn how to add type along a path! 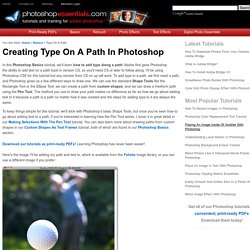 Adobe first gave Photoshop the ability to add text on a path back in version CS, so you'll need CS or later to follow along. I'll be using Photoshop CS5 for this tutorial but any version from CS on up will work. To add type to a path, we first need a path, and Photoshop gives us a few different ways to draw one. We can use the standard Shape Tools like the Rectangle Tool or the Ellipse Tool, we can create a path from custom shapes, and we can draw a freeform path using the Pen Tool.

The method you use to draw your path makes no difference as far as how we go about adding text to it because a path is a path no matter how it was created and the steps for adding type to it are always the same. Here's the image I'll be adding my path and text to, which is available from the Fotolia image library, or you can use a different image if you prefer: The original image. Let's get started! Add a Frosted Background to Photo Captions. In this Quick Tip tutorial, we will demonstrate how to improve a text caption by creating a frosted glass-like text bar that can improve the look of your photos or designs. 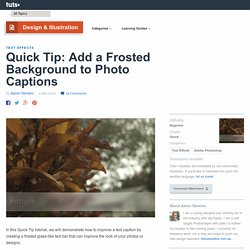 Open up any image in Photoshop. I used an autumn photo. You can use a similar one if you like. Otherwise, any image will do. Unlock the background layer by double clicking on the layer, call it "Leaves". Create a new layer (Cmd (Ctrl) + Shift + N) on top of the Leaves layer, and call it "Frosted Bar". 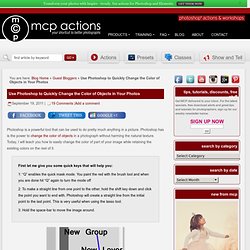 Photoshop has is the power to change the color of objects in a photograph without harming the natural texture. Today, I will teach you how to easily change the color of part of your image while retaining the existing colors on the rest of it. First let me give you some quick keys that will help you:1: “Q” enables the quick mask mode. You paint the red with the brush tool and when you are done hit “Q” again to turn the mode off2: To make a straight line from one point to the other, hold the shift key down and click the point you want to end with. Let’s get started: I have a picture that is unedited but the bride asked if the car could be another color. 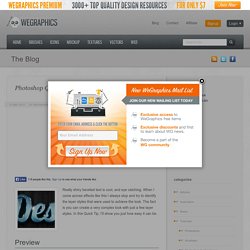 When I come across effects like this I always stop and try to identify the layer styles that were used to achieve the look. The fact is you can create a very complex look with just a few layer styles. In this Quick Tip, I’ll show you just how easy it can be. Preview. Gold Plated Text Effect In Photoshop. Written by Steve Patterson. 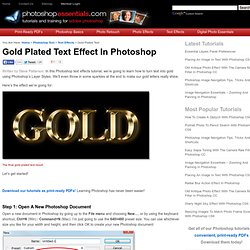 In this Photoshop text effects tutorial, we’re going to learn how to turn text into gold using Photoshop’s Layer Styles. We’ll even throw in some sparkles at the end to make our gold letters really shine. Here’s the effect we’re going for: The final gold plated text result. How To Create Rounded Corners for Your Pictures in Adobe Photoshop CS6. Let’s Round Some Corners On Pictures Using Adobe Photoshop CS6 I really struggled with this one. 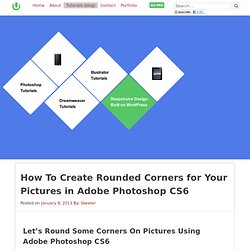 I literally spent about 4 or 5 hours searching the Internet for a how-to create rounded corners on my picture that I use as a header for this website. All the Photoshop tutorials and videos I looked at online were for Photoshop CS4 and 5. I come to find out there is a huge difference between those versions and Photoshop CS6. Photo To Sketch With More Detail. Written by Steve Patterson. 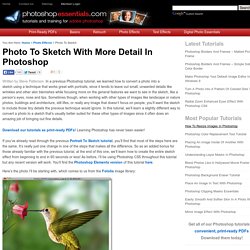 In a previous Photoshop tutorial, we learned how to convert a photo into a sketch using a technique that works great with portraits, since it tends to leave out small, unwanted details like wrinkles and other skin blemishes while focusing more on the general features we want to see in the sketch, like a person’s eyes, nose and lips. Sometimes though, when working with other types of images like landscape or nature photos, buildings and architecture, still lifes, or really any image that doesn’t focus on people, you’ll want the sketch to include those tiny details the previous technique would ignore.

In this tutorial, we’ll learn a slightly different way to convert a photo to a sketch that’s usually better suited for these other types of images since it often does an amazing job of bringing out fine details. If you’ve already read through the previous Portrait To Sketch tutorial, you’ll find that most of the steps here are the same. The original image.