The Science of Mental Illness. Share this infographic on your site! 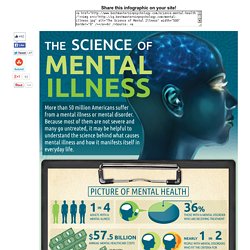 <a href=" src=" alt="The Science of Mental Illness" width="500" border="0" /></a><br />Source: <a href=" Science of Mental Illness</a> Embed this infographic on your site! The editors at Best Masters in Psychology Degrees decided to research the topic of: More than 50 million Americans suffer from a mental illness or mental disorder. Because most of them are not severe and many go untreated, it may be helpful to understand the science behind what causes mental illness and how it manifests itself in everyday life. Picture of Mental Health 1 in 4 - Adults with a mental illness - Those with a mental disorder who are receiving treatment $57.5 billion - Annual mental healthcare costs.

Narcissistic Personality Disorder - Psych Central. The symptoms of narcissistic personality disorder include: grandiose sense of importance, preoccupation with unlimited success, belief that one is special and unique, exploitative of others, lacks empathy, is arrogant, and is jealous of others. 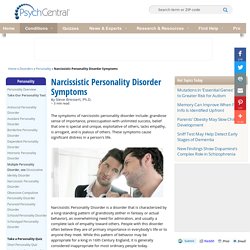 These symptoms cause significant distress in a person's life. Narcissistic Personality Disorder is a disorder that is characterized by a long-standing pattern of grandiosity (either in fantasy or actual behavior), an overwhelming need for admiration, and usually a complete lack of empathy toward others. People with this disorder often believe they are of primary importance in everybody’s life or to anyone they meet. While this pattern of behavior may be appropriate for a king in 16th Century England, it is generally considered inappropriate for most ordinary people today. People with narcissistic personality disorder often display snobbish, disdainful, or patronizing attitudes. Sanctuary for the Abused.

Enablers are Secondary Abusers. (Disclaimer, people who choose to stay married to or live with the Nspouse in order to protect their children from the alternative shared custody situation where their abusive Nspouse would do more damage if left alone w/the child does NOT apply to this article. 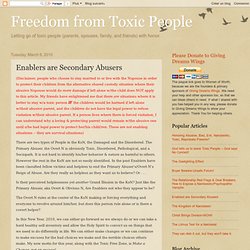 My friends have enlightened me that there are situations where it is better to stay w/a toxic person IF the children would be harmed if left alone w/their abusive parent, and the children do not have the legal power to refuse visitation w/their abusive parent. If a person lives where there is forced visitation, I can understand why a loving & protecting parent would remain w/the abusive one until s/he had legal power to protect her/his child/ren.

These are not enabling situations -- they are survival situations) There are two types of People in the KoN, the Damaged and the Disordered. The Primary Abuser, the Overt N is obviously Toxic, Disordered, Pathological, and a Sociopath. So how does this relate to Toxic Relationships? Debating More Skilfully and Detecting Others’ Bad Reasoning. This article first tells the story of someone who became paranoid with worry about things he later realised were unlikely to be really happening. 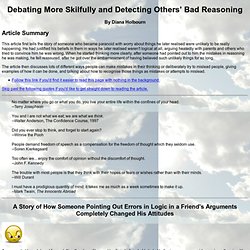 He had justified his beliefs in them in ways he later realised weren't logical at all, arguing heatedly with parents and others who tried to convince him he was wrong. When he started thinking more clearly, after someone had pointed out to him the mistakes in reasoning he was making, he felt reassured, after he got over the embarrassment of having believed such unlikely things for so long. The article then discusses lots of different ways people can make mistakes in their thinking or deliberately try to mislead people, giving examples of how it can be done, and talking about how to recognise those things as mistakes or attempts to mislead.

A Story of How Someone Pointing Out Errors in Logic in a Friend's Arguments Completely Changed His Attitudes His mother wasn't the only one who tried to reason with him; several people did. Controlling Anger in Relationships: Free Counseling Advice. When your boyfriend is angry at you, make a special effort to remain calm. 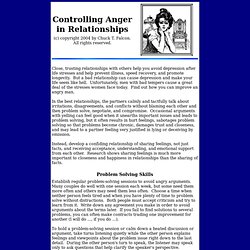 Take a few deep breaths, relax tension in your body, speak slowly, and keep your voice soft. Staying calm encourages him to calm down. Say "I'm sorry you're upset. " Don't act impatient, treat him as stupid or immature, nor make a fool of him in front of other people. If he yells at you or speaks loudly, point out what he needs to do in a positive, rather than negative, way. Occasionally allow him to save face with excuses. A bad temper is a long-term habit. Occasionally, you may need to repeat yourself more loudly, firmly, insistently, or even angrily to get what you want. Remember, polite requests and assertiveness work much better than anger. 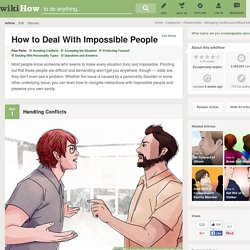 Having a civilized conversation with the impossible person is unlikely—at least with you. Recall every time you tried in the past to have a civilized discussion about your relationship with the person.