Here you can create the most basic items. 3×3 Crafting Grid The second way of crafting requires a workbench. Crafting Recipes Basic Blocks Tools Weapons Armor Transport Mechanisms Other Dyes Food. FULLY Automatic Sugarcane Farm Tutorial!!! - (Works in 1.5.2) Minecraft. DJ&Riggaz: Minecraft Semi-Automatic Wheat Farm. Minecraft Automatic Wheat Farm Harvester - Tutorial. Let's Build in Minecraft Series (Huge Mega-Projects + Tips) Weekly Bridges: Arch Bridges. Whether it's to amaze your friends, or simply build a sustainable bridge across water, you need to know the basics of bridge-building. I'm not the "Expert", but I have built a variety of bridges in minecraft. My current project is a Brooklyn Bridge style suspension bridge. I plan to, hopefully every week, give a few tips about bridge building. This weeks topic is "Arch Bridges".

Just to give an example of a small arch bridge I build today, This bridge connects the mainland to some newly generated land that we plan to use for agriculture and raising bacon. Secret Rooms. How to Make A Lava Or Water Door - My Design. Elites Of Minecraft: The Architect. The Architect Contents 1.00| The Tools of the Architect 1.10| Click Mining 1.20| The Golden Ratio 1.21| Calculating New Lengths. 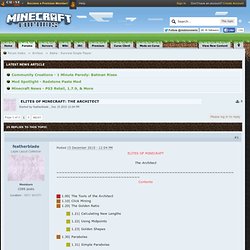 [GUIDE] Decoration, style and more! Tired of your house being ugly and generic? 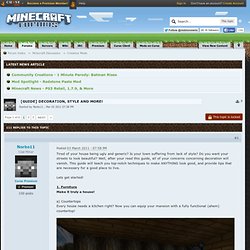 Is your town suffering from lack of style? Do you want your streets to look beautiful? Well, after your read this guide, all of your concerns concerning decoration will vanish. This guide will teach you top-notch techniques to make ANYTHING look good, and provide tips that are necessary for a good place to live. Lets get started! Compact All-In-One tree/sugar/wheat farm. So I was reading Valdark's Challenge and really enjoying each of his posts with the story/pictures. 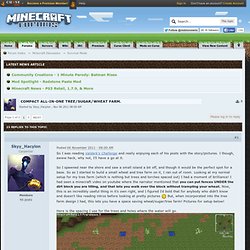 I though, awww heck, why not, I'll have a go at it. So I spawned near the shore and saw a small island a bit off, and though it would be the perfect spot for a base. So as I started to build a small wheat and tree farm on it, I ran out of room. Minecraft: Semi-Auto Wheat/Carrot/Potato Farm Tutorial. Vending Machine :) Minecraft Update 1.6 - "The Super Smelter" (Minecraft Automatic Furnace System) The Minecraft Journey - S2E20 - Blacksmith Shop! Minecraft: Water Pump. Minecraft Xbox 360 Edition: Small Modern House Tutorial! Part 1. Interesting patterns to decorate floors, ceilings, roads.

Minecraft Furniture - Storage. Minecraft: How to make A hot tub. Tutorials/Organization. Organization is a very important habit to get into in Minecraft. 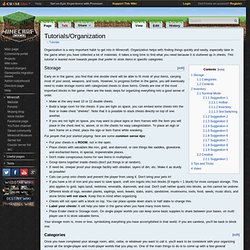 Organization helps with finding things quickly and easily, especially later in the game when you have collected a lot of materials. It takes a long time to find what you need because it is cluttered up in chests. This tutorial is leaned more towards people that prefer to store items in specific categories. [edit] Storage Early on in the game, you find that one double chest will be able to fit most of your items, carrying most of your wood, weapons, and tools. Make at the very least 10 or 12 double chests.Build a large room for the chests.

For people that just started playing, here are some common sense tips: Your storage room is, more or less, symbolizing everything you have accomplished in that world. [edit] Categories. Minecraft Xbox 360 : How to build a bathroom with WORKING shower. Google Image Result for. Minecraft: Hunger Games - Game 1 Part 3. End Portal's Survival Server - Government, Factions, Districts, Jobs, War, Currency - Read the recent posts before you apply. 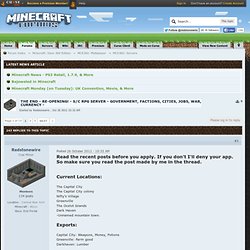 If you don't I'll deny your app. So make sure you read the post made by me in the thread. Current Locations: The Capital City The Capital City colony Nifty's Village Greenville The Ocelot Islands Dark Haven -Unnamed mountain town. 1.8.2 MCXBLA Seeds List. Redstone-Powered Transforming House Winner - TehGeekFather. Seeds. TheForge : fantasy name generator. Welcome to TheForge, a collection of Fantasy name and word generators, designed to spark the imagination and kindle the creative process. 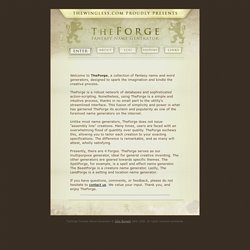 TheForge is a robust network of databases and sophisticated action-scripting. Nonetheless, using TheForge is a simple and intuitive process, thanks in no small part to the utility's streamlined interface. This fusion of simplicity and power is what has garnered TheForge its acclaim and popularity as one of the foremost name generators on the internet. Unlike most name generators, TheForge does not issue "assembly line" creations.

Many times, users are faced with an overwhelming flood of quantity over quality. Pics of your storage room? Two floors up from where it is now it began in a small dug out area in the wall... 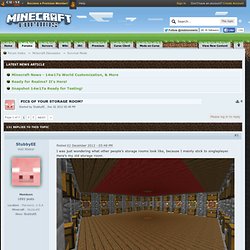 It was then relocated to a cave inside my home "Embedded in a mountain": Just before the top left you might see the corner of a door I had to put inas there was an even bigger cave there (Now a science lab), so I had to stop the mobs coming through and blowing my chests up! Starting to evolve: New bunker accessed by hatches, leading down to a collection point to collect the drops from the mobs: The storage area was so tiny back then... DJ&Riggaz: Minecraft Semi-Automatic Harvesting Melon Farm Tutorial. UPDATED ALMOST DAILY! TheForge: Fantasy Name Generator. Improving Your Builds- The Road to Becoming "That Guy" Golden Ratio: You have most likely heard of these two things before, both being very important to architecture. 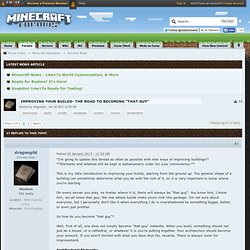 But, what are they? The golden ratio is the relationship between the height and width of your arch, in this case. When calculating the dimensions of the arch, keep in mind this formula: h = 1.628 (w) (Where 'h' is height and 'w' is width.) The golden ratio has been widely used since the times of ancient Greece. Fibonacci Sequence: This is the sequence of numbers which, when multiplied (or divided) by 1.628 will result in numbers very close to positive integers. 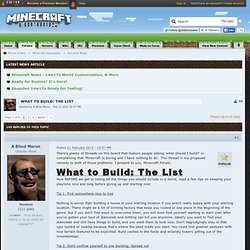 ' or complaining that 'Minecraft is boring and I have nothing to do'. This thread is my proposed remedy to both of those problems. I present to you, Minecraft Forum, 1001 things to add to your house. Minecraft Crafting Guide - Miscellaneous. Fantasy world name generator. Thread O' Links. If this thread has ever helped you find something or has inspired you, then pay it back by paying it forward. 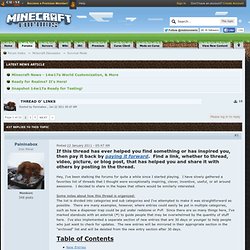 Find a link, whether to thread, video, picture, or blog post, that has helped you and share it with others by posting in the thread. Hey, I've been stalking the forums for quite a while since I started playing. I have slowly gathered a favorites list of threads that I thought were exceptionally inspiring, clever, inventive, useful, or all around awesome. I decided to share in the hopes that others would be similarly interested. Some notes about how this thread is organized: The list is divided into categories and sub categories and I've attempted to make it was straightforward as possible. Table of Contents. Top scoring links. Commands.

Commands are advanced functions activated by typing certain strings of text. In a regular Minecraft client or the stand alone client, commands are entered via Minecraft's chat window, which is displayed by pressing the T key (default) or / key. Using the / key will also enter the forward slash that commands require as a prefix, so it is a useful shortcut. Pressing Tab ↹ while entering commands cycles through possible commands or arguments.

Commands may also be entered in a multiplayer server's console, but are not preceded by a / when entered this way. Commands in Command Blocks can be preceded by a slash, but it is not required. The majority of commands are only available in the following situations: