Voxel's Guide To Building. Jungles are a little bit more complicated to work with, mostly because of the rough terrain at the bottom as well as at the canopies. 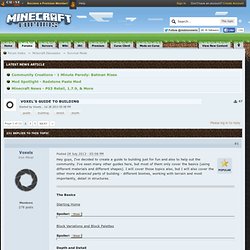 I find that a lot of treehouses made in minecraft are just boxes placed on top of the trees, which in my opinion is probably one of the biggest eyesores ever. Nevertheless, here's the jungle we'll be working with. (Note, this is the same world as the one with the medieval outpost in the previous section). You can see where I started working at the top, where the wooden planks are. That's the specific section we'll be using. The block palette, you'll see later on that I won't be using the stone bricks and clay though. First thing that I did was to scatter wooden planks across the top of the jungle tree.

The main lighting source we will use in this is glowstone, hidden with jungle leaves. Time to expand this even further. Here there are two jungle trees at close proximity, so I connected them together and created a floor. The finished structure. And connected! Arendelle Castle. Arendelle Castle is the home of Anna and Elsa in the film Frozen. 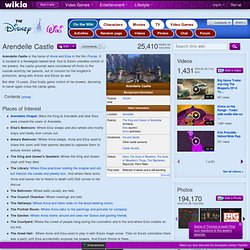 It is located in a Norwegian based land. Due to Elsa's unstable control of her powers, the castle grounds were considered off-limits to the outside world by her parents, out of concern for the kingdom's protection, along with Anna's and Elsa's as well. But after 13 years, Elsa finally gains control of her powers, declaring to never again close the castle gates. Places of Interest Arendelle Chapel: Were the King of Arendelle and later Elsa were crownd the rulers of Arendelle. Architecture Originally the castle of Arendelle was only going to be designed with a few motifs from the stave church, but the Art Director of Frozen, John Lasseter, encouraged the artists to fully celebrate holistically the unique qualities of these structures.

The east side of the castle is where the main gates are located below a clock and in between two smaller doors, one on each side, all connected to Arendelle via a bridge. Trivia Gallery. [Tutorial] Building a great castle in Minecraft! Minecraft Project. Guide to Building A Medieval Fantasy City/Town. Here are some ways to make the buildings in your town look nicer. 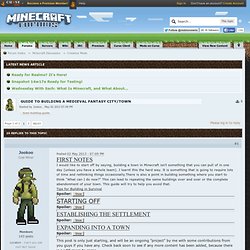 Here is the block many of you will think of building: But what about this? This isn't a cube, so it looks good, right? Well, no. It definitely looks better than a cube, but there are still ways to improve. Minecraft Castle Entrance by eapatrick on deviantART. The Bath House of Onexandria Minecraft Project. 20 Modern Minecraft Houses. By John Lundsten Minecraft is a game where creativity never stops flowing. 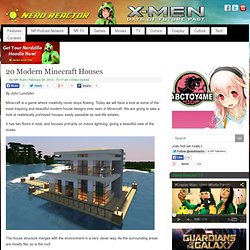 Today we will have a look at some of the most inspiring and beautiful modern house designs ever seen in Minecraft. We are going to take a look at realistically portrayed houses, easily passable as real-life estates. It has two floors in total, and focuses primarily on indoor lightning, giving a beautiful view of the ocean. The house structure merges with the environment in a very clever way. A pool surrounds one half of the house. A larger house with a lot of effort put on the interior. Two minimalistic house designs. A larger mansion with two floors, a pool and a neat garden. A huge mansion with a total of 3 floors, excluding the rooftop. Normally when modern houses are built in Minecraft surrounding areas are changed or entirely recreated to fit the house.

A smaller house built close to the water. This is probably one of my personal favourites. Wb1Da2W.jpg (957×500) Image Result for. Castle staircase minecraft. How to Build a Better castle wall, (From Flat To Fantastic!) MineConics. Minecraft Castles. First off, you must decide what your Minecraft castle is going to be made out of. 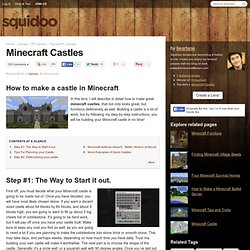 Once you have decided, you will have most likely chosen stone. If you want a decent sized castle about 64 blocks by 64 blocks, and about 9 blocks high, you are going to want to fill up about 5 big chests full of cobblestone. It’s going to be hard work, but it will pay off once you have your castle built. Make sure to keep any coal you find as well, as you are going to need a lot if you are planning to make the cobblestone into stone brick or smooth stone. This may take days, and perhaps weeks, depending on how much time you have daily. The list below shows some general dimensions and items in a typical minecraft castle. Minecraft - Medieval Tower Roof Tips/Guidelines! Minecraft - Circular Roof Tutorial. Pixel Circle / Oval Generator (Minecraft) — Donat Studios. CLOCKTOWER: Medieval Minecraft Tutorial (English) Show & tell: Castle. Talkin bout - Medieval farms in Minecraft.