How the Great Food War Will Be Won. By Jonathan Latham, PhD By conventional wisdom it is excellent news. 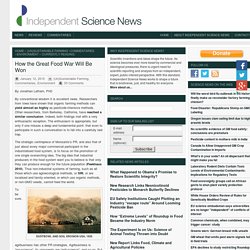 Researchers from Iowa have shown that organic farming methods can yield almost as highly as pesticide-intensive methods. Other researchers, from Berkeley, California, have reached a similar conclusion. Indeed, both findings met with a very enthusiastic reception. The enthusiasm is appropriate, but only if one misses a deep and fundamental point: that even to participate in such a conversation is to fall into a carefully laid trap. The strategic centrepiece of Monsanto’s PR, and also that of just about every major commercial participant in the industrialised food system, is to focus on the promotion of one single overarching idea.

Dustbowl and soil erosion USA, 1935 To be sure, agribusiness has other PR strategies. The real food crisis is of overproduction Yet this strategy has a disastrous foundational weakness. Of all the populous nations, Bangladesh comes closest to not being swamped in food. Fig 1. Reverse PR? Eat Drink Politics. Appetite for Profit: How the Food Industry Undermines Our Health and How to Fight Back The United States is currently embroiled in a national debate over the growing public health crisis caused by poor diet. 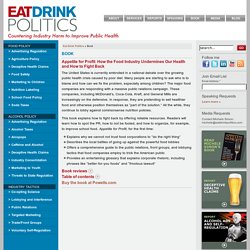 Many people are starting to ask who is to blame and how can we fix the problem, especially among children? The major food companies are responding with a massive public relations campaign. These companies, including McDonald’s, Coca-Cola, Kraft, and General Mills are increasingly on the defensive. In response, they are pretending to sell healthier food and otherwise position themselves as “part of the solution.”

This book explains how to fight back by offering reliable resources. The End of Chicken. While the western United States is suffering from crippling drought, the Midwest is reeling from an unprecedented outbreak of avian flu, mostly among egg-laying chickens and other forms of poultry. 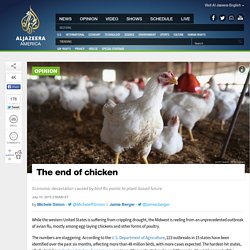 The numbers are staggering. According to the U.S. Department of Agriculture, 223 outbreaks in 15 states have been identified over the past six months, affecting more than 48 million birds, with more cases expected. The hardest-hit states, all of which have declared states of emergency, are Iowa, Minnesota, Nebraska and Wisconsin. About 11 percent of the nation’s egg-laying hens have been slaughtered out of fear that they might be infected. The cause of the outbreaks is still unknown, making containment a challenge, and its effects are far reaching, from how to dispose of millions of potentially infected bird carcasses to rising egg prices to job losses.

The federal government could spend half a billion dollars to compensate farmers for their losses. A River of Waste. A heart-stopping new documentary, A River Of Waste exposes a huge health and environmental scandal in our modern industrial system of meat and poultry production. 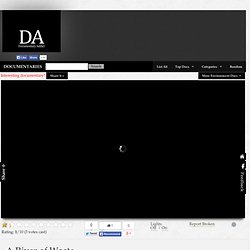 The damage documented in today's factory farms far exceeds the damage that was depicted in Upton Sinclair's novel, The Jungle, a book written over 100 years ago. Some scientists have gone so far as to call the condemned current factory farm practices as "mini Chernobyls. " The European Union stands virtually alone in establishing strong health and environmental standards for the industry. 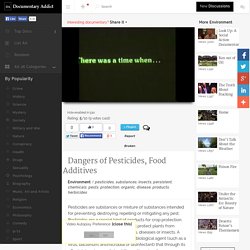 Pesticides are a special kind of products for crop protection. Crop protection products in general protect plants from damaging influences such as weeds, diseases or insects. A pesticide is generally a chemical or biological agent (such as a virus, bacterium, antimicrobial or disinfectant) that through its effect deters, incapacitates, kills or otherwise discourages pests. Meat the Truth. From the author: Climate Change and Global Warming - yes I know, it's a hoax, it's a scam and designed to keep us in fear and implement a Carbon Tax, as if we aren't already taxed to death. 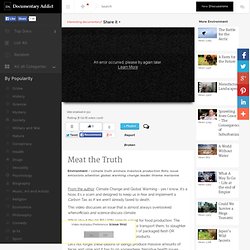 This video discusses an issue that is almost always overlooked whenofficials and science discuss climate. What about the 90 BILLION animals raised for food production. The energy to grow their food, to feed them, to transport them, to slaughter and finally to your local grocer in the form of packaged flesh OR prepared / frozen meals and various by-products. Let's not forget these billions of beings produce massive amounts of feces and urine and it has to go somewhere. Negative health issues aside, this practice most certainly contributes to wide scale pollution and contamination of our air, water and land.

The documentary Meat the Truth is the first major project undertaken by the Nicolaas G. PolyCultures: Food Where We Live. Food Fight (2008.