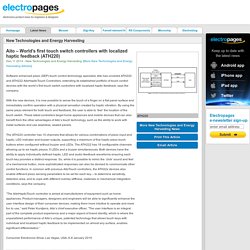 With the new devices, it is now possible to sense the touch of a finger on a flat panel surface and immediately confirm operation with a physical sensation created by haptic vibration. By using the same piezo element for both touch and feedback, the user is able to ‘feel’ the location of the touch switch. These latest controllers target home appliances and mobile devices that can also benefit from the other advantages of Aito’s touch technology, such as the ability to work with metal surfaces and use seamless, sealed panels.

Piezoelectric Device Harvests Wasted Heat Energy From Tech. When using devices such as laptops and phones, a certain amount of energy is always wasted via heat. 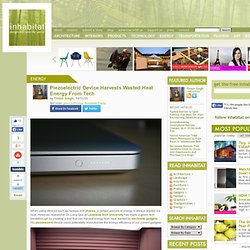 However, researcher Dr. Long Que at Louisiana Tech University has made a green tech breakthrough by creating a tool that can harvest energy from heat wasted by electronic gadgets. His piezoelectric device could potentially revolutionize the energy efficiency of our current gadgets. Image © qthrul. Charge A Laptop By Typing On It. A team of scientists at the Lawrence Berkeley National Laboratory in California, USA, have genetically engineered a harmless virus to convert mechanical energy into electrical energy. 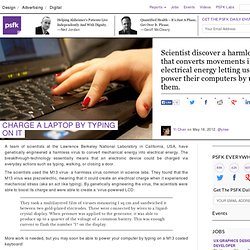 The breakthrough-technology essentially means that an electronic device could be charged via everyday actions such as typing, walking, or closing a door. The scientists used the M13 virus- a harmless virus common in science labs. Apple Invents New Flat Keyless Keyboard for Desktops & More. The General Problem to Solve Apple lays out the general problem to solve by stating that in general, touch-sensitive surface or related input devices may be less reliable in determining a pressed command or intended input when compared with a traditional mechanical keyboard. 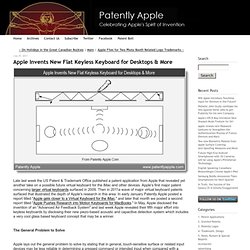 For example, some touch screens often require that a user tap on the screen several times before detecting the command. Further, touch-sensitive surface input devices often fail to distinguish between when a user is merely resting on the surface of the device or actively selecting a letter or other input. Apple Patent Application Details Ultra-Flat Keyboard. Apple patent application reveals advanced iPad magnetics system for dual iPad notebook computer and much more. Apr 17, 2014 - 05:15 PM EDT — AAPL: 524.94 (+5.93, +1.14%) | NASDAQ: 4095.516 (+9.291, +0.23%) “On February 28, 2013, the US Patent & Trademark Office published a patent application from Apple that reveals a system for magnetically attaching a tablet device to a supporting structure,” Jack Purcher reports for Patently Apple. 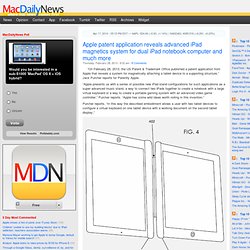 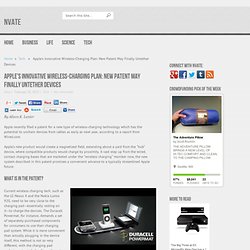 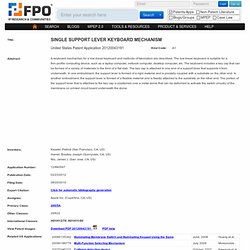 Recycle those Keystrokes- and Generate Electricity! This link was sent to us by an alert co-worker. 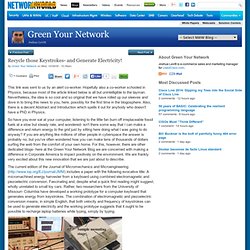 Hopefully also a co-worker schooled in Physics, because most of the article linked below is all but unintelligible to the layman. Nevertheless, the idea is so cool and so original that we have rolled up our sleeves and dove in to bring this news to you, here, possibly for the first time in the blogosphere. Also, there is a decent Abstract and Introduction which spells it out for anybody who doesn't have a PhD in Physics. So have you ever sat at your computer, listening to the little fan burn off irreplaceable fossil fuels at a slow but steady rate, and wondered- isn't there some way that I can make a difference and return energy to the grid just by sitting here doing what I was going to do anyway? If you are anything like millions of other people in cyberspace the answer is probably no, but you've often wondered how you can make tens of thousands of dollars surfing the web from the comfort of your own home. Piezoelectric keyboard could power your computer - Typing energy going to waste.

Aussie boffins have worked out a way to recharge your computer by using the keystrokes. 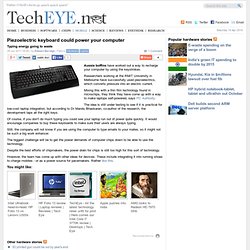 Researchers working at the RMIT University in Melbourne have successfully used piezoelectrics, which converts pressure into an electric current. Mixing this with a thin film technology found in microchips, they think they have come up with a way to make laptops self-powered, says PC Authority. The idea is still under testing to see if it is practical for low-cost laptop integration, but according to Dr Mandu Bhaskaran, co-author of the research, the development taps all the right keys. Of course, if you don't do much typing you could see your laptop run out of power quite quickly. It would encourage companies to buy these keyboards to make sure their users are always typing. Still, the company will not know if you are using the computer to type emails to your mates, so it might not be such a big work enhancer. However, the team has come up with other ideas for devices.