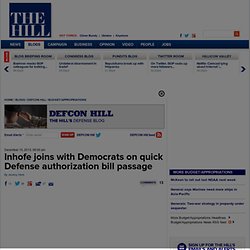 It has the ability to go fullscreen. It will display a list of suggested videos when the video has played to the end. Sen. James Inhofe (R-Okla.) is in the awkward position of joining forces with Senate Majority Leader Harry Reid (D-Nev.) to try to jam the Defense authorization bill through the Senate next week without considering amendments. The role places Inhofe at odds with some of his Senate Republican colleagues, including Minority Leader Mitch McConnell (R-Ky.), who are furious at Reid’s handling of the Senate amid the backlash of a change in rules that makes it easier to get nominees through the upper chamber.

Inhofe is also unhappy that the Defense bill isn’t getting amendment votes, but he is putting his role as ranking Republican on the Senate Armed Services Committee above any desires to stymie Reid. “The defense bill is different than all other bills,” Inhofe, an Army veteran, said. Sen. Sen. Tell Congress: Fix the NDAA. Monthly donors (our Guardians of Liberty) enable us to respond to urgent threats to our civil liberties. 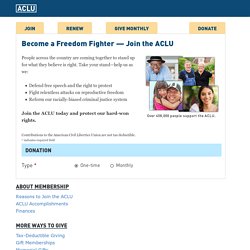 They provide us with the resources to stop: Attempts to suppress free speech Politicians from denying women reproductive freedom Racially-biased practices in our criminal justice system Join today with a monthly donation. Frequently Asked Questions about the Guardians of Liberty Program Where does my money go? What payment methods do you accept? When will I be charged? Can I change my donation? Can I cancel? Will I still need to renew my membership? Are my monthly gifts tax-deductible? Defence.professionals. CISPA Assumes Too Much Trust in Government. BOB ADELMANNNew American April 27, 2012 In a surprise move the White House issued a statement on Wednesday threatening to veto CISPA (Cyber Intelligence Sharing and Protection Act) because of privacy concerns. 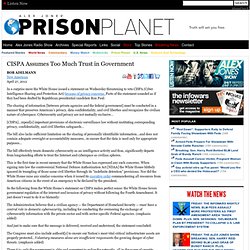 Parts of the statement sounded as if they had been drafted by Republican presidential candidate Ron Paul: The sharing of information [between private agencies and the federal government] must be conducted in a manner that preserves American’s privacy, data confidentiality, and civil liberties and recognizes the civilian nature of cyberspace. Cybersecurity and privacy are not mutually exclusive… [CISPA]…repeal[s] important provisions of electronic surveillance law without instituting corresponding privacy, confidentiality, and civil liberties safeguards… Organizing Against Obama. Ron Paul and Barack Obama: Tweet More, Talk Less. Our generation doesn't trust the handful of egotistical, TV-makeup encrusted "experts" on CNN, MSNBC, and FOX. 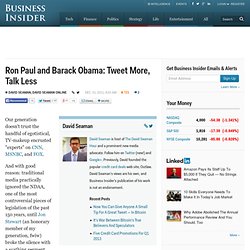 And with good reason: traditional media practically ignored the NDAA, one of the most controversial pieces of legislation of the past 150 years, until Jon Stewart (an honorary member of my generation, fwiw) broke the silence with a scathing segment about the so-called "U.S. Is A Battlefield" bill. After that, The Guardian, The New York Times, Bloomberg Businessweek and the TV chattering class finally wised up and started telling their viewers that yes, maybe it's not an awesome idea to allow the government to detain American citizens forever without any charges, and without right to a trial or attorney. So where can twentysomethings and thirtysomethings turn for information that is more "truthy" and less "infotainment about Kim Kardashian's failed marriage"?

We can turn to Twitter, Facebook, Google+ and each other. SOPA, the NDAA, and Patent-Trolling: Why Americans Need a Civil Liberties Caucus. Nationwide NDAA protests on Bill of Rights Day slated - National Human Rights. Rights defenders to protest oppression under Obama administration As U.S. 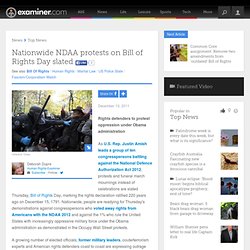 Rep. Justin Amish leads a group of ten congresspersons battling against the National Defence Authorization Act 2012, protests and funeral march mournings instead of celebrations are slated Thursday, Bill of Rights Day, marking the rights declaration ratified 220 years ago on December 15, 1791. Nationwide, people are readying for Thursday's demonstrations against congresspersons who voted away rights from Americans with the NDAA 2012 and against the 1% who rule the United States with increasingly oppressive military force under the Obama administration as demonstrated in the Occupy Wall Street protests. A growing number of elected officials, former military leaders, couterterrorism experts and American rights defenders coast to coast are expressing outrage over the U.S.

Dennis Kucinich on the NDAA and ‘War Without End’ « Women Born Transsexual. From Truth Dig: By Rep.

Dennis KucinichPosted on Dec 20, 2011 Rep. Dennis Kucinich of Ohio, perhaps the most consistent advocate of peace in the U.S. Congress, has been forced by gerrymandering into a primary battle. Our children deserve a world without end, not war without end. NDAA Bill Controversy: So who is Considered a Terrorist? To be fair, the language of the bill specifically targets terrorists connected to al-Qaeda, the Taliban, or associated forces. 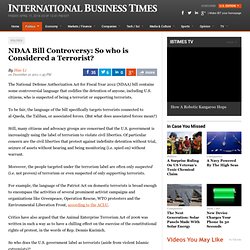 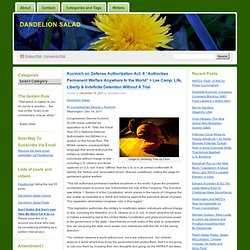 Kucinich Washington, Dec 14, 2011 Image by Shrieking Tree via Flickr Congressman Dennis Kucinich (D-OH) today outlined his opposition to H.R. 1540, the Fiscal Year 2012 National Defense Authorization Act (NDAA) in a speech on the House floor. Kucinich stands against NDAA 2012's DoD Full Spectrum Dominance. Good read: Excerpt: Wednesday, during the House debate about the National Defence Authorization Act (NDDA) 2012, the nation's peace congressperson, Ohio Representative Dennis Kucinich outlined his opposition to NDAA including not only its unprecedented language authorizing military to indefinitely detain individuals without charge or trial – including U.S. citizens and those captured on U.S. soil, but also that NDAA affirms that the U.S. is in an armed conflict with "Al Qaeda, the Taliban and undefined 'associated forces'" setting the stage for permanent global warfare. 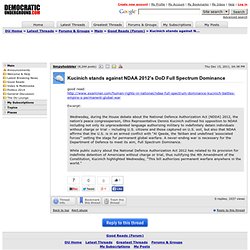 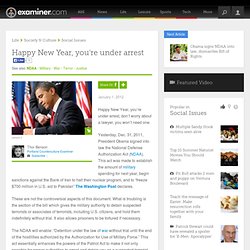 Yesterday, Dec. 31, 2011, President Obama signed into law the National Defense Authorization Act (NDAA). This act was made to establish the amount of military spending for next year, begin sanctions against the Bank of Iran to halt their nuclear program, and to “freeze $700 million in U.S. aid to Pakistan” The Washington Post declares.

NDAA Full Spectrum Dominance: Kucinich battles empire's permanent global war - National Human Rights. Kucinich stands against NDAA 2012's DoD Full Spectrum Dominance Wednesday, during the House debate about the National Defence Authorization Act (NDDA) 2012, the nation's peace congressperson, Ohio Representative Dennis Kucinich outlined his opposition to NDAA including not only its unprecedented language authorizing military to indefinitely detain individuals without charge or trial – including U.S. citizens and those captured on U.S. soil, but also that NDAA affirms that the U.S. is in an armed conflict with "Al Qaeda, the Taliban and undefined 'associated forces'" setting the stage for permanent global warfare.

A never-ending war is necessary for the Department of Defence to meet its aim, Full Spectrum Dominance. Those few words of Kucinich, leader of a U.S. Department of Peace project, succinctly summarizes Full Spectrum Dominance of Joint Vision 2020. In a 245-169 vote Wednesday afternoon, the U.S. "This is a brave new world. NDAA 2012: Ron Paul Warns Bill Would Legalize Martial Law.

This is a giant step -- this should be the biggest news going on right now -- literally legalizing martial law, Paul said on the Alex Jones radio show. He added that despite the topic's importance, the subject has never been discussed at any of the Republican presidential debates. Paul is refferring to section 1031 of the NDAA bill, which describes the U.S. as a battlefield and would give the military a green light to arrest and detain American citizens without any charges or trial.

Sen. Mark Udall (D-Colo.) sums it up: These provisions raise serious questions as to who we are as a society and what our Constitution seeks to protect, Sen. In other words, the military could arrest any American citizen suspected of being a domestic terrorist and throw them into a military prison indefinitely. Several Congressmen and women are speaking out against the wording of section 1031.

5 Washington State Legislators Introduce Bill Condemning the NDAA. Social Media Dashboard for Teams using Twitter, Facebook, Linkedin. NDAA Protests Begin at Congressional Offices Nationwide. States moving to nullify NDAA? Regardless of where you stand politically, you probably have some very strong feelings on the NDAA and it’s provision that will allow the government to indefinitely detain someone because they’re a “terrorist”.

The NDAA managed to make it through both chambers of Congress (remember that one is controlled by Democrats, the other by Republicans) and was signed into law on December 31, 2011, effectively killing due process. Senate Passes Bill Allowing Indefinite Detention of Americans ... Considers Bill Authorizing More Torture. Obama, NDAA, and Indefinite Detention. Obama Prepares to Authorize Indefinite Detention of U.S. Citizens for First Time Since McCarthy Era–Glenn Greenwald on NDAA. Ron Paul introduces bill to repeal section of NDAA. The NDAA is a threat to the democratic rights of all human beings. ACLU trashes Obama over indefinite detention and torture act.