A Slick Trick on the NDAA and Indefinite Detention; Don't Be Fooled! It looks like there is slick little trick brewing in Congress. 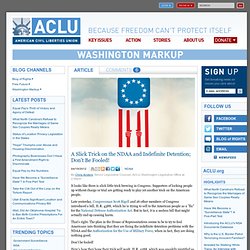 Supporters of locking people up without charge or trial are getting ready to play yet another trick on the American people. Late yesterday, Congressman Scott Rigell and 26 other members of Congress introduced a bill, H.R. 4388, which he is trying to sell to the American people as a "fix" for the National Defense Authorization Act. But in fact, it is a useless bill that might actually end up causing harm. That's right. Is CISPA SOPA 2.0? We Explain the Cybersecurity Bill. Our rundown on the debate over the latest controversial Internet bill and what CISPA could mean for you. 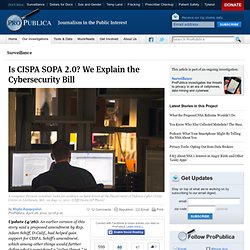 A computer forensic examiner looks for evidence on hard drives at the Department of Defense Cyber Crime Center in Linthicum, Md., on Aug. 11, 2011. (Cliff Owen/AP Photo) Update (4/26): An earlier version of this story said a proposed amendment by Rep. Adam Schiff, D-Calif., had helped gain support for CISPA. Schiff’s amendment, which among other things would further define what’s considered a "cyber threat," is no longer scheduled for consideration.

The Cyber Intelligence Sharing and Protection Act [1], up for debate in the House of Representatives today, has privacy activists, tech companies, security wonks and the Obama administration all jousting about what it means – not only for security but Internet privacy and intellectual property. Arizona Legislature Passes Anti-NDAA Bill. Perhaps prodded by Virginia’s success in passing a law preventing the federal government from apprehending and indefinitely detaining citizens of that state, the state legislature of Arizona on Tuesday passed its own anti-NDAA bill. 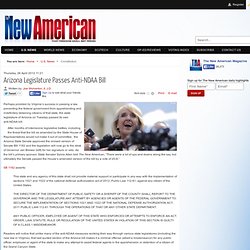 After months of internecine legislative battles, including the threat that the bill as amended by the State House of Representatives would not make it out of committee, the Arizona State Senate approved the revised version of Senate Bill 1182 and the legislation will now go to the desk of Governor Jan Brewer (left) for her signature or veto. As the bill’s primary sponsor, State Senator Sylvia Allen told The New American, “There were a lot of ups and downs along the say, but ultimately the Senate passed the House’s amended version of the bill by a vote of 20-8.” According to Senator Allen, although she is currently in talks with the Governor’s staff to address their concerns, Governor Brewer’s signature on the bill is not a foregone conclusion. Nullify the NDAA by Dr. Brian Phillips. On Dec. 31, 2011, while Americans celebrated the arrival of the new year, President Obama signed into law the National Defense Authorization Act (NDAA). 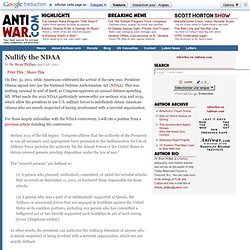 This was nothing unusual in and of itself, as Congress approves an annual defense spending bill. What made the 2012 NDAA particularly newsworthy are sections 1031 and 1032, which allow the president to use U.S. military forces to indefinitely detain American citizens who are merely suspected of having involvement with a terrorist organization. Nationwide Protests Against Arbitrary Imprisonment Powers of The NDAA. Outside a home state office of Senator John McCain, a hand written protest sign read “NDAA = Death To Due Process”. 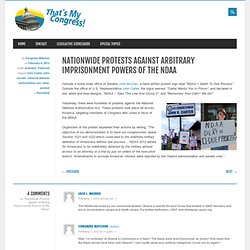 Outside the office of U.S. Representative John Carter, the signs warned, “Carter Wants You In Prison”, and declared in red, white and blue designs, “NDAA – Take This Law And Shove It”, and “Remember Your Oath? We Do!” Saying No To The NDAA » The Final Stage. Congress Calls For Drones To Be Fully Integrated Into US Airspace By 2015. Northrop Grumman We reported yesterday that the past decade has seen unprecedented growth in the number of U.S. drones flying the skies over Iraq and Afghanistan. 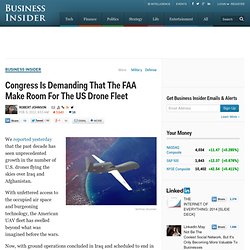 With unfettered access to the occupied air space and burgeoning technology, the American UAV fleet has swelled beyond what was imagined before the wars. Now, with ground operations concluded in Iraq and scheduled to end in Afghanistan by 2014, those new drones will be coming home and their pilots will need a place to fly them and train. Which could be why Congress is calling for the accelerated use of unmanned drones in U.S. air space. Terrorism Expert Brian Michael Jenkins: NDAA is Counterproductive. According to a recent article, military custody is counterproductive and the numbers do not lie. 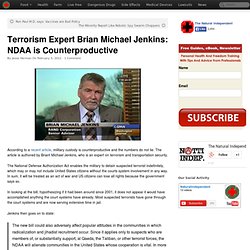 The article is authored by Briant Michael Jenkins, who is an expert on terrorism and transportation security. The National Defense Authorization Act enables the military to detain suspected terrorist indefinitely, which may or may not include United States citizens without the courts system involvement in any way. In sum, it will be treated as an act of war and US citizens can lose all rights because the government says so.

In looking at the bill, hypothesizing if it had been around since 2001, it does not appear it would have accomplished anything the court systems have already. Most suspected terrorists have gone through the court systems and are now serving extensive time in jail. Jenkins then goes on to state: Ndaa 2012 « Corporate Criminals Exposed. Regardless of who was really behind them and why, chances are the Boston Marathon bombings would not have happened if unconstitutional laws like AUMF 2001 and NDAA 2012 Sec 1021 were not on the books. 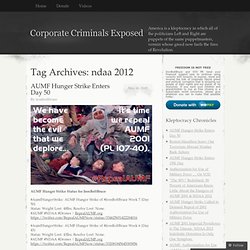 Monday’s Boston Marathon bombing killed 3 Americans and wounded more than 170 others. It was clearly an act of terrorism, but as with 9/11 no terrorist organization has thus far claimed responsibility. That’s seen by some as an indication that the act was state-sponsored. If so, what state? I don’t know who did it. National Day of Action Against the NDAA (National Defense Authorization Act) - Austin, Texas 2-3-12. Patriots Taking Action Against The National Defense Authorization ACT (NDAA) - The Maine Tea Party / Maine ReFounders. 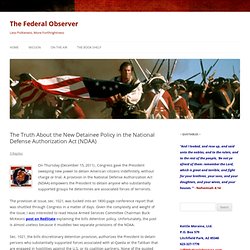 A provision in the National Defense Authorization Act (NDAA) empowers the President to detain anyone who substantially supported groups he determines are associated forces of terrorists. The provision at issue, sec. 1021, was tucked into an 1800-page conference report that was shuttled through Congress in a matter of days. Congress Directs DoD to Conduct Market Research on Made in USA Athletic Footwear « Soldier Systems. Have you ever asked yourself why your combat boots have to be made in the USA but not your running shoes? 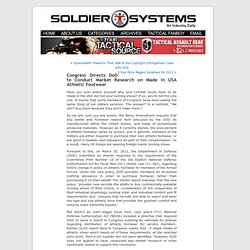 If so, you’re not the only one. It seems that some members of Congress have been asking the same thing of our military services. The answer? In a nutshell, “We don’t buy them because they don’t make them.” Sen. Leahy lambastes NDAA’s detention provisions. In his statement on the passage of the National Defense Authorization Act (NDAA) last month, Senator Patrick Leahy (D-VT) spoke out against the law’s authorization of indefinite detention without trial. Calling the detention provisions “unwise and unnecessary,” Leahy criticized the NDAA’s dismissal of constitutional principles, the law’s national security implications, and the inadequate transparency throughout the bill’s passage.

Leahy’s criticism of the NDAA reflected some of the same concerns articulated by Senator Rand Paul (R-KY). Though supporters of indefinite detention suggest that such measures are appropriate during times of war, Leahy fires back, “That does not mean that we should be a Nation without laws, or a Nation that does not adhere to the principles of our Constitution.” Leahy also argues that this law will affect our international standing, as indefinite detention “severely weakens our credibility when we criticize other governments for engaging in similar conduct.” A Tired Obsession With Military Detention Plagues American Politics. By Andy Worthington Before the terrorist attacks on September 11, 2001, there were only two ways of holding prisoners — either they were prisoners of war, protected by the Geneva Conventions, or they were criminal suspects, to be charged and subjected to federal court trials.

That all changed when the Bush administration threw out the Geneva Conventions, equated the Taliban with al-Qaeda, and decided to hold both soldiers and terror suspects as “illegal enemy combatants,” who could be imprisoned indefinitely without charge or trial, and with no rights whatsoever. The Bush administration’s legal black hole lasted for two and a half years at Guantánamo, until, in Rasul v. NEW CAMPAIGN: Repeal Indefinite Detention. In his last official act of 2011, President Barack Obama signed the massive bipartisan National Defense Authorization Act (NDAA) that included shocking detainee provisions. We explain the reasons in the letter below. We invite you to send a letter to your Representatives and Senators demanding repeal, and you may borrow from or copy this... I demand you repeal the detainee provisions of the 2011 National Defense Authorization Act.

I am appalled that any member of Congress would support provisions such as... * REQUIRED military detention of foreigners that are suspected of being terrorists * Military detention as the preferred OPTION for American terror suspects * No charges need to be filed, and no trials must be held * Prisoners to be held "until the end of hostilities"These provisions can be more accurately described as "kidnapping" — which is a crime whether it's done by individuals, gangs, or bigger gangs called States.And what does "the end of hostilities" mean? Obama or Obey Me? The scaffolding of an American police state! « San Diego Occupy Press. US president signs controversial defence bill - Americas.

Barack Obama, the US president, has signed a wide-ranging defence bill into law, putting into place new provisions that regulate the detention, interrogation and prosecution of those suspected of terrorism, as well as imposing fresh sanctions on Iran. In a statement accompanying his signature to the $662bn bill, Obama said that he was signing it despite having "serious reservations" about the provisions relating to terrorism, contending that politicians in the US congress were attempting to restrict the ability of counterterrorism officials to protect the country. He argued that recent US successes against al-Qaeda had been possible because counterterrorism authorities had benefited from flexibility on dealing with suspects, which he said the bill called into question. Obama's signature caps months of wrangling over how to handle captured terrorism suspects without violating US constitutional rights. New Iran sanctions EU-Iran talks. CAIR Seeks Support for Bill Barring Military Detentions.

NDAA Another Broken Promise by President Barack Obama and an Attack on Civil Liberties @PolicyMic. On the last day of 2011, President Barack Obama signed the National Defense Authorization Act (NDAA) for the upcoming year, following the Act’s passage through the Senate (with an 86-13 margin) and House of Representatives (283-136). Passing an NDAA has been an annual act of the government for decades, but included in this year’s NDAA are provisions asserting “the authority for the Armed Forces of the United States to detain covered persons … pending disposition under the law of war.”

The vague definition provided by the bill for “covered persons” includes supporters of the Taliban and Al-Qaeda or “associated forces,” as well as “any person who has committed a belligerent act.” What constitutes associated forces or belligerent acts, though, is left to the president to determine. In addition, the bill also authorizes “enhanced interrogation techniques,” i.e., torture. New national defense act shreds our legal rights.

#J3 - Call To Action Against the NDAA. R. 3166: Enemy Expatriation Act (GovTrack.us) GovTrack’s Bill Summary We don’t have a summary available yet. Twitvid. The Absolute Moron’s Guide to the New Military Detention Laws. Being president is tough. NDAA Outrage Continues To Grow Online. Obama’s words are hollow. Time for Liberals and Conservatives to Unite and Fight the NDAA.

Browse > Home / Commentary / Obama’s words are hollow. Time for Liberals and Conservatives to Unite and Fight the NDAA America 20xy By Andrew Steele In a written statement President Obama claimed that even though he supports the NDAA as a whole, he has serious reservations about it, and doesn’t like the parts of it that allow him to detain U.S. citizens indefinitely without trial. He goes on to promise Americans that he will never ever use it, arrogantly expecting the American people who have been burned by him– a known liar, promise breaker, and mass murderer disguised as a statesman– time and again to believe him. Obama Warned By CIA, “Surrender Or Join Kennedy”???? False Flag pt 3! by Raynard Tha X-Man on Myspace. The NDAA Explained: