Corzined Marvell Muppets Sue Vampire Squid. If you don’t understand the title of this article, you need to get your recommended daily dose of Zerohedge.com. 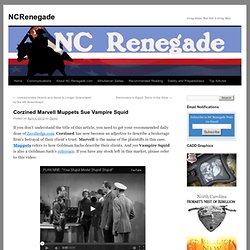 Corzined has now become an adjective to describe a brokerage firm’s betrayal of their client’s trust. Marvell is the name of the plaintiffs in this case. Muppets refers to how Goldman Sachs describe their clients. And yes Vampire Squid is also a Goldman Sach’s reference. If you have any stock left in this market, please refer to this video: But Goldman Sachs is not the only firm Corzine-ing Americans. Goldman Sachs doesn’t (appear to) understand stats. Who are the muppets now? This article first appeared in Third Sector magazine. 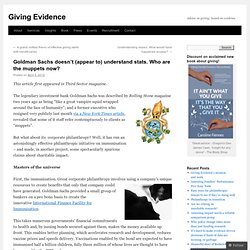 The legendary investment bank Goldman Sachs was described by Rolling Stone magazine two years ago as being “like a great vampire squid wrapped around the face of humanity”; and a former executive who resigned very publicly last month via a New York Times article, revealed that some of it staff refer contemptuously to clients as “muppets”. But what about its corporate philanthropy? Well, it has run an astonishingly effective philanthropic initiative on immunisation – and made, in another project, some spectacularly spurious claims about charitable impact. Masters of the universe First, the immunisation. Resources to create benefits that only that company could have generated. This takes numerous governments’ financial commitments to health and, by issuing bonds secured against them, makes the money available up front. Caught Between MF Global And The Tax Man. 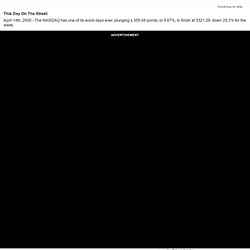 NEW YORK (TheStreet) -- Client money missing from MF Global (MFGLQ.PK) has been located in a custodial account at JPMorgan Chase (JPM_), Bloomberg reported, citing two people familiar with the matter. An MF Global custodial account at the bank contained about $658.8 million of client funds as of October 31, according to the report. Regulators had said about $633 million of client money meant to be part of a segregated fund was missing, sparking allegations that the brokerage, which filed for bankruptcy Monday, had violated rules that required customer funds be kept separate from the firm's money. MF Global clients cry foul over JPMorgan tactics in bankruptcy recovery. It’s not just the protesters at Zuccotti Park who complain big banks are trampling on the little guy. 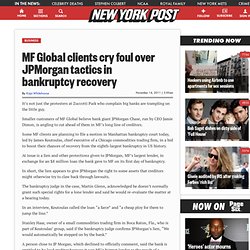 Smaller customers of MF Global believe bank giant JPMorgan Chase, run by CEO Jamie Dimon, is angling to cut ahead of them in MF’s long line of creditors. Some MF clients are planning to file a motion in Manhattan bankruptcy court today, led by James Koutoulas, chief executive of a Chicago commodities trading firm, in a bid to boost their chances of recovery from the eighth-largest bankruptcy in US history.

At issue is a lien and other protections given to JPMorgan, MF’s largest lender, in exchange for an $8 million loan the bank gave to MF on its first day of bankruptcy. MF Global Customers Target JP Morgan.

No Arrests Inside Goldman Sachs, Though We Were Arrested Outside. Chris Hedges made this statement in New York City’s Zuccotti Park on Thursday morning during the People’s Hearing on Goldman Sachs, which he chaired with Dr. 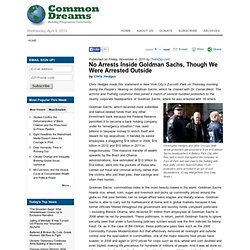 Cornel West. The activist and Truthdig columnist then joined a march of several hundred protesters to the nearby corporate headquarters of Goldman Sachs, where he was arrested with 16 others. Christopher Hedges and other Occupy Wall Street protesters get arrested in front of Goldman Sachs headquarters in Battery Park City after they held a mock trial against the company at Zuccoti Park and marched to the building with their guilty verdict. Approximately 15-20 protesters were arrested in an act of civil disobedience. Bankers’ Complaint of Uncertainty Obscures Reluctant Disclosure. While bankers complain that regulatory uncertainty is hurting growth, their failure to provide balance-sheet transparency is creating uncertainty for the taxpayers who bailed them out. 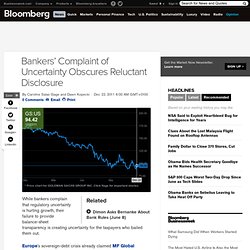 Europe’s sovereign-debt crisis already claimed MF Global Holdings Ltd., the brokerage run by Jon S. Corzine that collapsed on Oct. 31, and credit-default swap prices imply a more than 1-in-5 chance of default for Morgan Stanley, Goldman Sachs Group Inc. (GS) and Bank of America Corp. (BAC) in the next five years. That’s up from about 1-in-10 odds at the beginning of July, according to data provider CMA and a standard credit-swaps industry-pricing model. MF Global Client Attorney On Closing His JP Morgan Account: 'Don't Worry Jamie, Mine Won't Be The Only One.' James Koutoulas, the lawyer that represents over 8,000 MF Global customers and the co-founder of the Commodity Customers Coalition, was just on CNBC to talk with Rick Santelli. 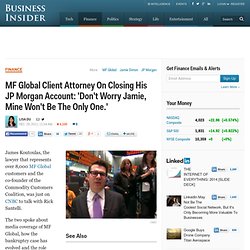 The two spoke about media coverage of MF Global, how the bankruptcy case has evolved and the role financial institutions like the CME Group and JP Morgan has played in the proceedings. Near the end, Koutoulas gave a provoking comment on the letter JP Morgan sent him asking him to close his business' accounts with the bank. "Don't worry Jamie," he said, obviously taunting JP Morgan CEO Jamie Dimon, "mine won't be the only one. " Jon Corzine Reportedly Shopped For French Chateau While MF Global Was On Verge Of Collapse. As MF Global inched towards collapse, CEO Jon Corzine pre-occupied himself with a few other things -- namely securing a chateau for him and his wife in the ritzy south of France. 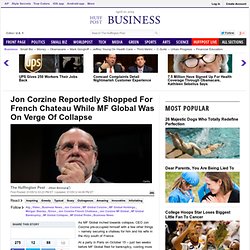 At a party in Paris on October 15 -- just two weeks before MF Global filed for bankruptcy, costing more than 1,000 workers their jobs -- Corzine and his wife, Sharon Elghanayan, were discussing a house they planned to purchase in the south of France, according to an upcoming report in Vanity Fair. "It's not in Cap Ferrat," one person at the party told Vanity Fair they recall Elghanayan saying in an effort to tone down the extravagance. Cap Ferrat is a coastal town in the south of France known for its lavish lifestyle. Though Corzine, a former Goldman Sachs CEO, governor of New Jersey and Senator, was able to scrounge up the money for a possible chateau purchase, he's having a little bit more trouble tracking down MF Global clients' money, much of which is still missing. MF Global Sold Assets to Goldman Sachs Before Collapse. Goldman Sachs Information, Comments, Opinions and Facts: Goldman Sachs and MF Global: Blankfein and Corzine.

Goldman Sachs guys stick together: they support each other's businesses; they bail each other out; they make sure the powers of their businesses remain strong; and they occasionally compete with each other in order to maintain their assets. 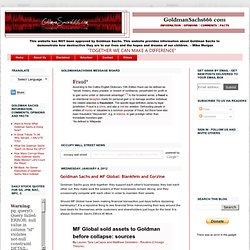 Should MF Global have been making financial transaction just days before declaring bankruptcy? It is a repulsive thing to see financial firms maneuvering their way around the best deals for themselves while customers and shareholders just hope for the best. It is always Goldman Sachs Ethics At Work. MF Global Unloaded Hundreds Of Millions In Securities On Goldman Before Collapse: Sources. (Lauren Tara LaCapra and Matthew Goldstein) - MF Global unloaded hundreds of millions of dollars' worth of securities to Goldman Sachs in the days leading up to its collapse, according to two former MF Global employees with direct knowledge of the transactions. 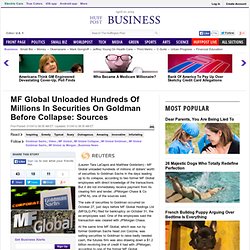 But it did not immediately receive payment from its clearing firm and lender, JPMorgan Chase & Co (JPM.N), one of the sources said. The sale of securities to Goldman occurred on October 27, just days before MF Global Holdings Ltd (MFGLQ.PK) filed for bankruptcy on October 31, the ex-employees said. One of the employees said the transaction was cleared with JPMorgan Chase. At the same time MF Global, which was run by former Goldman Sachs head Jon Corzine, was selling securities to Goldman to raise badly needed cash, the futures firm was also drawing down a $1.2 billion revolving line of credit it had with JPMorgan, according to one of the former MF Global employees. Copyright 2011 Thomson Reuters. MF Global sold assets to Goldman Sachs before its collapse: Sources. PTI Feb 18, 2014, 05.01AM IST.

James Dimon relationship map. Lloyd C. Blankfein relationship map. Ratings agencies wield global influence. Standard & Poor’s is exerting pressure on government to a degree that would make many K Streeters blush. On Monday, S&P put 15 euro nations on notice that it was considering a downgrade. (Our map below shows the 15 countries.) On Tuesday, it also threatened to lower the rating on the euro zone’s rescue fund. The news came as European leaders prepared to meet to address the debt crisis. Goldman Sachs: All Recipients. Goldman sachs. The similarities between banks and landmines. Last night I was presenting to the MAG-net group. MAG-net is the networking group in the City for the Mines Advisory Group, MAG, a charity supported by the Financial Services Club and others that clears areas of mines so that schools, villages and life can continue as it should in post-war territories. They invited me to speak about anything I wanted, and so I created a new presentation about the similarities between banks and landmines (see UBS today).

The presentation developed around the idea of banks being mines that explode in economic terms, in a similar way in which landmines explode and blow away people and animals in the real world. My premise was that just as landmines blow the legs away from humans, banks blow the legs off economies. It’s obviously the case that this is true today, what with the Lehmans collapse with Credit Default Swaps creating the first financial crisis; and now sovereign debt in the Eurozone is developing the second. Jon Corzine firm used clients money to plug the hole as troubles mounted. MF Global Holdings filed for bankruptcy protection MondayCorzine is former Goldman CEO and N.J. governorCompany admits diverting clients money, official says By Associated Press Updated: 05:21 GMT, 2 November 2011 MF Global, the securities firm led by Jon Corzine, admitted using clients' money as its financial troubles mounted, a federal official says.

The FBI is expected to investigate whether the firm's actions violated criminal laws, according to two people familiar with the situation. An MF Global executive told regulators early Monday that the company had diverted client money, according to an official familiar with a separate probe by regulators. Troubled: Jon Corzine, MF Global Holdings CEO, left, leaves his office in Manhattan, New York, on Monday as it filed for bankruptcy protection It isn't clear where the money ended up or what it might have been used for, the official said.