Egypt's New Leader Will Have 'Full Power' Eurasia Review. By Al Bawaba News Egypt’s interim President Adly Mansour, who promised that the “new constitution will establish a modern civil state,” said the country’s new leader will have “full powers,” without detailing what these powers are in a television address on Sunday. 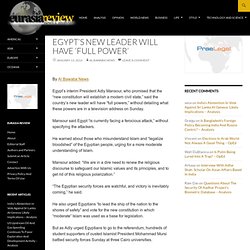 Mansour said Egypt “is currently facing a ferocious attack,” without specifying the attackers. He warned about those who misunderstand Islam and “legalize bloodshed” of the Egyptian people, urging for a more moderate understanding of Islam. Mansour added: “We are in a dire need to renew the religious discourse to safeguard our Islamic values and its principles, and to get rid of this religious polarization.” “The Egyptian security forces are watchful, and victory is inevitably coming,” he said. 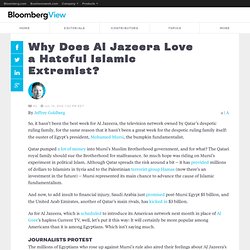 Qatar pumped a lot of money into Mursi’s Muslim Brotherhood government, and for what? That Giant Laser Messaging in Tahrir Square: It’s Not a Coup. July 5, 2013 Have you noticed the pithy Arabic and English narrative broadcast billboard-style the past few days by the anti-Morsi military/modernist alliance? 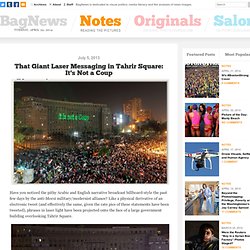 Like a physical derivative of an electronic tweet (and effectively the same, given the rate pics of these statements have been tweeted), phrases in laser light have been projected onto the face of a large government building overlooking Tahrir Square. I can’t verify just how many phrases have been “published” and in what sequence. What I can attest to, however, is that at least two English phrases have garnered significant attention from the Western visual media over the past few days — the “Game Over” phrase on Wednesday, the night of the overthrow (video), and “It’s not a Coup” last night. The state of e-grammar being what it is, I’m not sure what to make of the second phrase lacking initial caps except for the “Coup.” Awramba Times » Ethiopia – Egypt: Is a war over the Nile still imminent? By Debay Tadesse Until the recent positive signs of cooperation between some of the Nile riparian states, disputes between the downstream and upper riparian states over rights to the waters of the Nile have been a contentious issue for centuries. 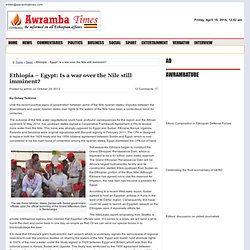 The outcome of the Nile water negotiations could have profound consequences for the region and the African continent. In May 2010, five upstream states signed a Cooperative Framework Agreement (CFA) to access more water from the Nile. This move was strongly opposed by Egypt and Sudan. Watershed Moment For Religious Teaching In Egypt. By CGNews By Joseph Mayton In a noteworthy development that has been largely unreported by foreign media, Egypt’s Ministry of Education announced that a new human rights class for 11th grade students will use portions of the Bible in its curriculum and will discuss non-Muslim rights in Islam. 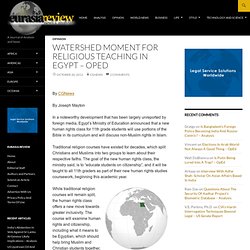 Traditional religion courses have existed for decades, which split Christians and Muslims into two groups to learn about their respective faiths. The goal of the new human rights class, the ministry said, is to “educate students on citizenship”, and it will be taught to all 11th graders as part of their new human rights studies coursework, beginning this academic year. American Filmmaker Who Sparked Libya, Egypt Unrest Hates Obama, Hearts the GOP. Cross-posted from Right Wing Watch Morris Sadek, an Egyptian-American anti-Muslim activist, managed in one week’s time to take an overlooked YouTube video featuring a lame attack on Islam and turn it into a flashpoint with violent extremists, with deadly consequences. 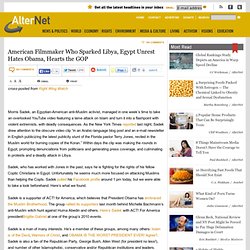 As the New York Times reported last night, Sadek drew attention to the obscure video clip “in an Arabic-language blog post and an e-mail newsletter in English publicizing the latest publicity stunt of the Florida pastor Terry Jones, reviled in the Muslim world for burning copies of the Koran.” Within days the clip was making the rounds in Egypt, prompting denunciations from politicians and generating press coverage, and culminating in protests and a deadly attack in Libya. Sadek, who has worked with Jones in the past, says he is fighting for the rights of his fellow Coptic Christians in Egypt. Unfortunately he seems much more focused on attacking Muslims than helping the Copts. Egypt’s Grand Mufti: Another authority that Brotherhood seeks to undermine:. CAIRO - Egypt's Muslim Brotherhood on Thursday denounced the visit by the nation's grand mufti, Ali Gomaa, to Jerusalem, calling it as a "catastrophe" that undermined the Palestinian aspirations. 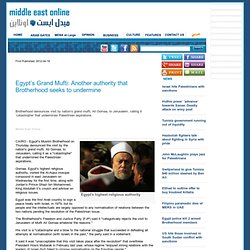 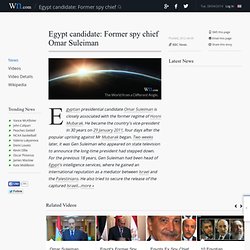 Breaking News, Business News, Financial and Investing News & More. Sun, Jul 15 2012 By Arshad Mohammed and Marwa Awad CAIRO (Reuters) - Protesters threw tomatoes and shoes at U.S. Secretary of State Hillary Clinton's motorcade on Sunday during her first visit to Egypt since the election of Islamist President Mohamed Mursi. A tomato struck an Egyptian official in the face, and shoes and a water bottle landed near the armoured cars carrying Clinton's delegation in the port city of Alexandria. A senior state department official said that neither Clinton nor her vehicle, which were around the corner from the incident, were struck by any of the projectiles. Protesters chanted: "Monica, Monica", a reference to Former President Bill Clinton's extra-marital affair. It was not clear who the protesters were or what political affiliations they had. "I want to be clear that the United States is not in the business, in Egypt, of choosing winners and losers, even if we could, which of course we cannot," Clinton said. 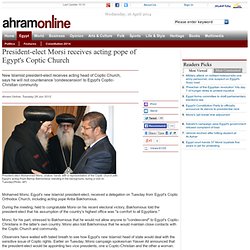 During the meeting, held to congratulate Morsi on his recent electoral victory, Bakhomious told the president-elect that his assumption of the country's highest office was "a comfort to all Egyptians. " Egypt's new president to pick woman, Christian VPs. Egypt's president-elect, Mohamed Morsi, is in the process of putting together a government. 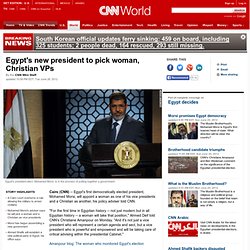 A Cairo court overturns a rule allowing the military to arrest civilians Mohamed Morsi's adviser says he will pick a woman and a Christian as vice presidents Morsi has begun assembling a new governmentAhmed Shafik will establish a new political party in Egypt, his office says Cairo (CNN) -- Egypt's first democratically elected president, Mohamed Morsi, will appoint a woman as one of his vice presidents and a Christian as another, his policy adviser told CNN.

Egypt court rejects army powers to arrest civilians. Egypt court strikes down martial law decree. President-elect Mohamed Morsi, accompanied by Interior Minister Mohamed… (Mohamed Abdel Moaty / Egyptian…) CAIRO — A move by Egypt's ruling generals to revive martial law was blunted Tuesday by a court that struck down a government decree that had allowed soldiers and military intelligence services to arrest civilians during the nation's political turmoil. The decision by an administrative court, which followed an outcry from human rights groups, was a rebuke to the ruling generals, who have tightened their hold on the country to prevent newly elected Islamist President Mohamed Morsi from accumulating power. The decree had given the army authority to target activists protesting against the Supreme Council of the Armed Forces. New Egyptian president Morsi calls for unity, peace in first speech.

Egyptian president-elect Mohammed Morsi gave his first televised speech on state TV since being declared the next leader Sunday, calling for unity and saying he carries “a message of peace” to the world. Get The Times of Israel's Daily Edition by email and never miss our top stories Free Sign up! Morsi pledged to preserve Egypt’s international accords, a reference to the peace deal with Israel, saying “we will honor international treaties and agreements, and will create balanced international relations based on mutual interests and respect.”

“I’m fully aware of the challenges ahead, but I’m confident with your support we can overcome this transitional period,” added Morsi. The protesters of Tahrir Square: democratic watchdogs or 'naive minority'? The verdicts handed out on Saturday are absurd. If [former interior minister] Habib El Adly received a life sentence for giving the order to kill protesters, then how is it possible not to punish those who carried out the orders? While these verdicts were being pronounced, protesters were already out in Tahrir Square, demanding that a law forbidding former Mubarak regime leaders from running for political office be applied. The aim of this is to get Shafiq out of the race. So the slogans they chanted were not just about the verdicts; they more generally condemned the return of the former regime’s leaders.

Polls close, counting begins in Egypt. Roughly 50 million people were eligible to vote for one of 12 candidates for the Egyptian presidency. Muslim Brotherhood claims lead in Egypt elections. Egypt's Muslim Brotherhood on Friday claimed that its candidate, Mohammed Mursi, would enter a runoff vote next month with Ahmed Shafiq, the last prime minister to serve under ousted president Hosni Mubarak.

The Muslim Brotherhood based its claim on alleged results from about 12,800 of the roughly 13,100 polling stations. Egypt Coptic Pope Shenouda funeral held in Cairo.

Why Egypt moved against unregistered NGOs. Recent strains in the U.S.- Egyptian relationship over unregistered nongovernmental organizations (NGOs) operating in this country are unfortunate. Neither country benefits from these tensions. But a necessary first step to putting these differences behind us is U.S. understanding of the Egyptian government’s concerns, which are shared by the overwhelming majority of Egyptians.

The problem did not begin on Dec. 29, when 17 offices of 10 NGOs operating throughout Egypt were investigated. It started several years ago. Rights group: Egypt’s generals are muzzling media. Sorry, this one's an error. Update: Kidnapped tourists freed in Egypt, reports say. Report: Two American tourists kidnapped in Egypt. Egypt: Hundreds Of Protesters Gather For Rallies In Cairo. By Ria Novosti Hundreds of protesters gathered on early Friday morning near the Egyptian state television and radio building in Cairo, Nile News television channel reported. Protesters are demanding to sack directorship of all state media agencies and replace with new ones.

They also demand to put an end to the rule of the country’s Supreme Council headed by Field Marshal Hussein Tantawi, who took power from ex-President Hosni Mubarak in February last year and has since remained the country’s de facto leader. Activists from various political parties and movements are also gathering on Friday morning on Cairo’s Tahrir Square, situated near the state television and radio building. On January 25, 2011 mass demonstrations began in Cairo and Alexandria, leading to the resignation of Egyptian President Hosni Mubarak in February and the transfer of power to the Supreme Council of the Armed Forces (SCAF) headed by Field Marshal Mohamed Hussein Tantawi.