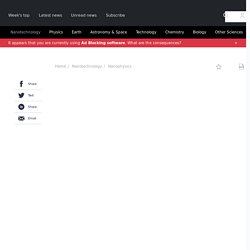 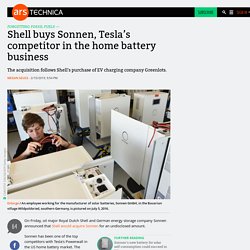 Sonnen has been one of the top competitors with Tesla's Powerwall in the US home battery market. The company built its base in Germany, attaching batteries for self-consumption to homes with solar panels. Sonnen now claims 40,000 batteries installed in households in Germany, the US, and Australia. Mercedes-Benz brings its home battery to the US - The Verge. A 2,000 YEAR OLD ELECTRIC BATTERY. Piezoelectric energy can potentially replace batteries in future. Piezoelectric energy can potentially replace batteries in future Alternative energy industry, as we all know, is growing exponentially. 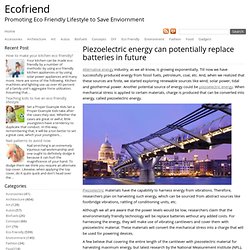 Till now we have successfully produced energy from fossil fuels, petroleum, coal, etc. And, when we realized that these sources are finite, we started exploring renewable sources like wind, solar power, tidal and geothermal power. Another potential source of energy could be piezoelectric energy. When mechanical stress is applied to certain materials, charge is produced that can be converted into energy, called piezoelectric energy.

Piezoelectric materials have the capability to harness energy from vibrations. Although we all are aware that the power levels would be low, researchers claim that the environmentally friendly technology will be replace batteries without any added costs. Vibration harvesters designed to replace AA, AAA batteries. To illustrate the application of vibration-powered electricity generators the example is given of installing them in a remote control for a television or set-top box, where it is possible to use the remote after shaking it to generate power. 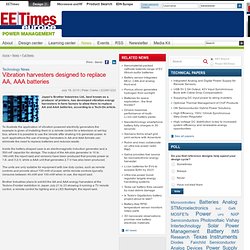 In such applications the use of energy harvesters in AA and AAA formats can eliminate the need to replace batteries and reduces waste. Inside the battery-shaped case is an electromagnetic induction generator and a 500-mF capacitor for storage. The output of the AA-size generator is 10 to 180-mW, the report said and versions have been produced that provide power at 1.6- and 3.2-V, while a AAA unit that generates 2.7-V has also been produced. Tesla Plans Model S Battery Swap as Fast Refueling Option. Tesla Motors Inc. 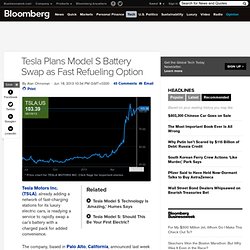 (TSLA), already adding a network of fast-charging stations for its luxury electric cars, is readying a service to rapidly swap a car’s battery with a charged pack for added convenience. The company, based in Palo Alto, California, announced last week plans for a June 20 press conference at its design studio in Hawthorne, California, to show “a way for the Tesla Model S to be recharged faster than you could fill a gas tank.” Chief Executive Officer Elon Musk, in a Twitter post today, said the event would feature a “live pack swap” demonstration at 8 p.m. California time on June 20. Energy-Generating Knee Strap Could Spell the End of Batteries.

Photo by Shutterstock Time for the energy industry to pull itself up by the knee straps: A group of scientists in the United Kingdom have developed a novel energy-harvesting device that attaches to the joint between the thigh and shin. Composed of piezoelectric materials , which generate power when they’re subjected to mechanical strain, the technology could spell self-powered heart monitors for athletes, lighter loads for soldiers, and gadgets that won’t run out of juice before you do.

The research, published in this month’s issue of , combines the expertise of scientists from Cranfield University , the University of Liverpool , and the University of Salford . The device itself is circular, with an outer ring and a central hub. Brother’s Vibration Energy Cell batteries to shake up power generation for low power devices.

Brother's AA-size Vibration Energy Cell battery prototype whose generator and rechargeable battery are installed in two different cases (Image: Tech-On) A number of kinetic energy chargers have been hitting the market in recent years including the nPower PEG. Researchers have also been working to improve the technology, developing such devices as the Kinetic Energy Cell and a tiny generator that derives electrical energy from the vibrations and movements that occur within its environment. NEC goes ultra-thin with 0.3mm-thick batteries. (PhysOrg.com) -- NEC, which has been working on what is called "organic radical battery" (ORB) technology for some years, has announced its latest ORB breakthrough, the 0.3mm thick ORB. 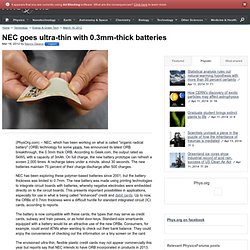 According to Geek.com, the output rated as 5kW/L with a capacity of 3mAh. On full charge, the new battery prototype can refresh a screen 2,000 times. A recharge takes under a minute, about 30 seconds. The new batteries maintain 75 percent of their charge-discharge after 500 charges. This Paintable Battery Can Be Used Virtually Anywhere. Researchers at Rice University in Texas have created a paintable battery that can be used anywhere. 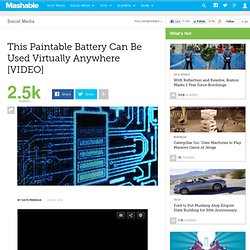 Also impressive — the battery is rechargeable and can hold a 2.4 volt charge for six hours. To create this sprayable battery, the team disassembled the chemicals of a lithium-ion battery and converted them into five paints. Dual-charged Approach to Battery Testing. Researchers produce power from engineered virus. Thursday, 17 May 2012 08:09 News & Events - Engineering News May 17, 2012 It's not all that uncommon to hear energetic people described as dynamos, and any given person consumes and uses plenty of energy throughout the day. 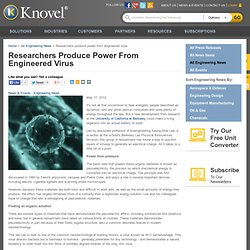 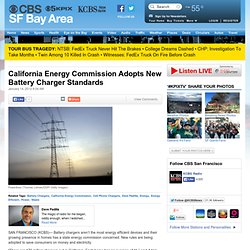 New rules are being adopted to save consumers on money and electricity. “There are 170 million chargers out in California. Each home has an average of 11,” said Adam Gottlieb with the California Energy Commission. The agency just approved a first of its kind in energy efficient standards for all those cell phone and digital camera battery chargers that keep adding up. New Effort to Keep Battery Chargers From Wasting Your Power. It's been dubbed "vampire power"--the electricity that is sucked out of your home by inefficiencies and devices that draw electricity whenever they're plugged in, even when they're not turned on. 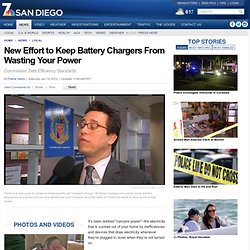 For nearly four decades, California's Energy Commission has led a crusade to drive a stake into vampire power by setting efficiency standards for a wide range of appliances, from refrigerators to flatscreen televisions. California even beat the federal government to the punch by a year by moving to phase out the classic 100 watt lightbulb with the improvements in lighting efficiency that have occurred since Thomas Edison's day.

Now the Commission is going after the devices that recharge the batteries for your ever growing collection of portable electronics, from cellphones to music players, laptops to power tools. How to Conserve Battery Life on Your iPhone. It’s well-known that, with the release of iOS 5, battery life has been less than exemplary. I’ve been slammed with it, too, and am feeling the repercussions when I’m only halfway through the day and I get that dreaded low battery warning on my iPhone — not only my iPhone, but any iDevice has been struck hard for those of us who have updated. Apple has been actively pursuing a solution to the problem and even called complaining owners personally to have them install diagnostic tools for troubleshooting.

Since then, iOS 5.0.1 has been released to combat the problem a little bit, with a full solution promised in an iOS 5.0.2 release soon. While we wait for a solution to come from Apple on the dire battery issue that has left many of us buying external battery packs or even carrying around our chargers with us everywhere we go.

Ahlstrom has an option to acquire the remaining shares at a later stage. Battery separators, which keep the anode and cathode from touching each other and short-circuiting, are vitally important in the performance and safety of electric vehicles. The Perfect Power Tool for the iPad-Packing World Traveler - Alexis Madrigal - Technology.

Suzuki to Launch E-Scooter with Detachable Battery: #evworld. PHOTO CAPTION: Suzuki e-Lets Scooter Electric e-Lets scooter has range of up to 30 km and speed of 30 km/h on level roads. American Vanadium Seeks Partners to Build Battery Technology. Dec. 12 (Bloomberg) -- American Vanadium Corp., building the only vanadium mine in the U.S., has held talks with Sumitomo Corp. and United Technologies Corp. about using the metal for batteries used to store renewable energy.