Airspace+ - NATS. Ooyala Video. Gmail - Free Storage and Email from Google. How to Land a 737 (Nervous Passenger Edition) Wind games 2016. Что себе позволяет этот негр? The Mighty J58 - The SR-71's Secret Powerhouse. Stefanv.com. Worlds Largest Aircraft. An-225 Mriya (which is referred to Dream from Ukrainian) is the heaviest airlift cargo aircraft ever taken off in the sky. 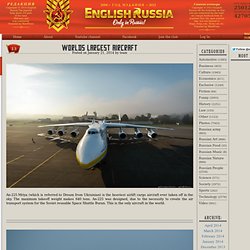 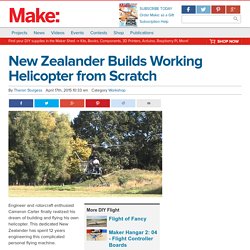 This dedicated New Zealander has spent 12 years engineering this complicated personal flying machine. He sought a project that involved solving all the problems that the pioneers of aviation had to solve. One of his biggest motivations was proving he could do it to all who thought it couldn’t be done. In his videos you can see him working to solve problems of radiator pressure, thermal siphoning, and eliminating overheating after shutdown. Check out this video for a close up of the engine and radiator. He solved the load to lift problem by selecting the right engine for the job, a V4 common to 1970’s two seat helicopters.

Sadly, Cameron explains on his YouTube channel that the civil aviation authority strongly advised him to discontinue the project. See him flying and testing, hovering and maneuvering. AeroMobil: Flying car. Mr. 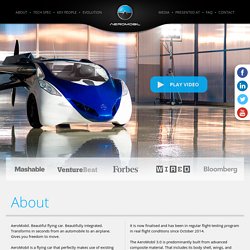 Mercer is a leading expert in the automotive industry globally, having spent three decades of experience in automotive advisory work, including over 20 years at McKinsey & Company, where he was the chief of the Automotive Practice, leading or participating in hundreds of client studies over that timeframe. When he left McKinsey as a Partner in 2006, he established his own independent advisory service. NASA Shuttle Endeavour Los Angeles Final Flight. How to FLY A SPACESHIP to the SPACE STATION - Smarter Every Day 131. A Beginner's Guide to the Secret Language of Airport Runways. Amazing Tales of SR-71 Blackbird Plane. Flight testing incident footage demonstrates strength of new composite helicopter. The Mighty J58 - The SR-71's Secret Powerhouse. eWUrZuZ.gif (GIF Image, 480 × 360 pixels) What a Blackbird Drinks. Florida Barometric Pressure Map - Air Sports Net. Top 25 Coolest Aircraft. RvvCmIo.jpg (JPEG Image, 942 × 942 pixels) Lockheed SR-71 Blackbird. A closer look at the space shuttle that never got to space.

NEW YORK—The space shuttle Enterprise has been ensconced aboard the USS Intrepid for just over two years. 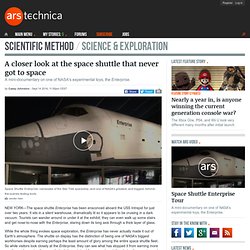 It sits in a silent warehouse, dramatically lit so it appears to be cruising in a dark vacuum. Tourists can wander around or under it at the exhibit; they can even walk up some stairs and get nose-to-nose with the Enterprise, staring down its long axis through a thick layer of glass. While the whole thing evokes space exploration, the Enterprise has never actually made it out of Earth's atmosphere.

The shuttle on display has the distinction of being one of NASA's biggest workhorses despite earning perhaps the least amount of glory among the entire space shuttle fleet. Rogers Knobel SR-71 Blackbird Giant Remote Control Turbine Jet. Aeronautics e-Book Archive. From Jet to Jet- Being the USAF Thunderbirds Official Photographer. How to Pack an Emergency Kit Like a Spy Plane Pilot. Your Resource for Aviation Intercom Recording.

A newbie's guide to UAVs. What is an amateur UAV? 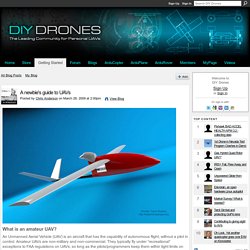 An Unmanned Aerial Vehicle (UAV) is an aircraft that has the capability of autonomous flight, without a pilot in control. Amateur UAVs are non-military and non-commercial. They typically fly under “recreational” exceptions to FAA regulations on UAVs, so long as the pilots/programmers keep them within tight limits on altitude and distance.

AirCam Flies Slow and Low - Manufactured and Distributed by Lockwood Aircraft. Welcome to Droning On. Flying the world's fastest plane: Behind the stick of the SR-71. Building a Cessna 172 Simulator. Worlds Largest Aircraft. HOME. PowerUp 3.0 Is A Bluetooth Module That Turns A Paper Plane Into A Lean, Mean App-Controlled Flying Machine. There’s something intrinsically appealing about a choreographed blend of low and high tech. 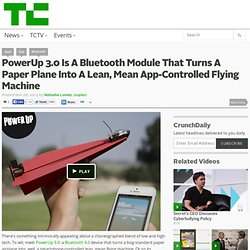 To wit, meet PowerUp 3.0: a Bluetooth 4.0 device that turns a bog-standard paper airplane into, well, a smartphone-controlled lean, mean flying machine. Or so its makers claim. And if those claims stack up pranking your teachers is about to get a whole lot more sophisticated. What exactly is Power Up 3.0? It’s a Bluetooth module that connects to a paper plane to act as both frame, propulsion/steering device, and Bluetooth communications hub — meaning the user can control the plane via their smartphone. Electric two-seater Volocopter is tested in Germany (w/ Video) (Phys.org) —The flying machine looks something like a helicopter but it is quite different and is intended to be a future answer to the greening of noisy, vibration-heavy helicopters as we have known them. 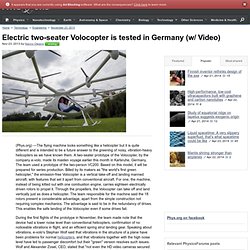 A two-seater prototype of the Volocopter, by the company e-volo, made its maiden voyage earlier this month in Karlsruhe, Germany. The team used a prototype of the two-person VC200. Based on this model, it will be prepared for series production. Billed by its makers as "the world's first green helicopter," the emission-free Volocopter is a vertical take-off and landing manned aircraft, with features that set it apart from conventional aircraft. For one, the machine, instead of being kitted out with one combustion engine, carries eighteen electrically driven rotors to propel it. 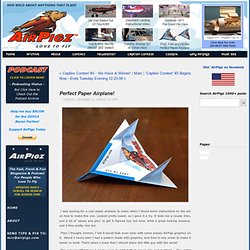 Looked pretty sweet, so I gave it a try. It took me a couple tries, and a lot of ‘pause and play’ to get it figured out, but wow, what a great looking airplane, and it flew pretty nice too. Then I thought, hmmm, I bet it would look even nicer with some snazzy AirPigz graphics on it. About 2 hours later I had a pattern made with graphics, and lines in key areas to make it easier to build. Why I Charge $545/Hour to Fly Passengers in My Helicopter. Look at all the numbers, please. I can’t tell you how many times passengers have attempted to calculate my cost of operations based on my helicopter’s hourly fuel burn rate multiplied by the price of 100LL fuel it burns.

Home Page - Roadrunners Internationale Declassified U-2 A-12 Projects Aquatone OXCART Area 51. Transporting the CIA A-12 Blackbird. First Person: My Uncle Was First to Fly Over Everest. Eighty years ago this month, my uncle steered his open-cockpit Houston-Westland biplane toward Tibet, a young explorer hoping to be the first to set eyes on the summit of Everest. 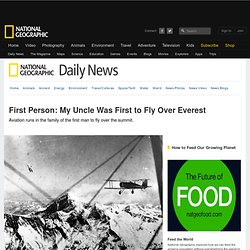 Uncle Douglo is how I've always thought of him, but his name was Douglas Douglas-Hamilton, Marquis of Douglas and Clydesdale. Most people knew him as just Clydesdale. Also with him, as "observer," was Stewart Blacker. Although primitive by today's standards, their plane was a marvel of its day, with its supercharged Pegasus engine capable of soaring above 40,000 feet. A second, similar plane, a Westland-Wallace, followed close behind, piloted by David McIntyre, with S.R. The two biplanes had only rudimentary oxygen equipment and enough fuel on board for no more than 15 minutes flying time over the treacherous mountain. Bugatti - REVE BLEU - the "Blue Dream" will finally fly! by Scotty Wilson. Bugatti's Only Aeroplane Ettore Bugatti was a master at fusing art and technology. 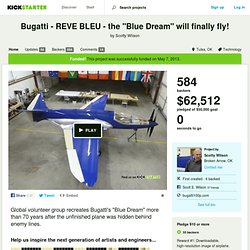 He built eight-thousand exquisite automobiles, but he built only one aeroplane. The Bugatti 100P - designed by Belgian engineer Louis de Monge - was an art-deco classic and the most technologically-advanced airplane of its time. The Elegant Solution to Flying Very Fast! The innovative Bugatti 100P was a giant leap forward in the late 1930s, featuring advanced systems and cutting-edge aerodynamics. How NASA brought the monstrous F-1 “moon rocket” engine back to life. There has never been anything like the Saturn V, the launch vehicle that powered the United States past the Soviet Union to a series of manned lunar landings in the late 1960s and early 1970s. The rocket redefined "massive," standing 363 feet (110 meters) in height and producing a ludicrous 7.68 million pounds (34 meganewtons) of thrust from the five monstrous, kerosene-gulping Rocketdyne F-1 rocket engines that made up its first stage.

At the time, the F-1 was the largest and most powerful liquid-fueled engine ever constructed; even today, its design remains unmatched (though see the sidebar, "The Soviets," for more information on engines that have rivaled the F-1). The power generated by five of these engines was best conceptualized by author David Woods in his book How Apollo Flew to the Moon—"[T]he power output of the Saturn first stage was 60 gigawatts. This happens to be very similar to the peak electricity demand of the United Kingdom. " EAA Video Player - Your Source for Aviation Videos. Supersonic Flight: Sonic booms. Detailed Photographs of Various Aircrafts from Below. Goodyear GZ-20A Blimp When traveling, it's typical to see the sides, the front, even the tail of an airplane, but it's not often that you get to see the details of a plane's underbelly. American photographer Jeffrey Milstein gives us this opportunity in his project, entitled Aircraft: The Jet as Art. Each machine is perfectly centered within the composition, which results in a sense of graphic symmetry and precision that is unique to the perspective.

By presenting them in this way, the artist encourages his viewers to examine the beauty and form of this modern technology. When exhibiting the photographs, Milstein produces large prints so that his viewers can almost feel the rush of air from each plane as it zips past. Fighter Pilot University. Powered Flight Deck of the Space Shuttle Endeavour photos. Flying Presents the Top 100 Airplanes. SmartCockpit - Airline training guides, Aviation, Operations, Safety.