What Happened on January 29th. What Happened on January 29th. Narendra Modi Set to Visit Bangladesh on 17th March. Indian Prime Minister Narendra Modi will be the chief guest at an event to kick-start the year-long centenary celebrations for ''Bangabandhu'' Sheikh Mujibur Rehman in Dhaka on March 17 in a move that signals the robust bilateral relations between India and Bangladesh, reports Hindustan Times. 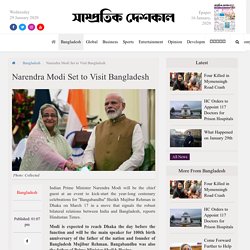 Modi is expected to reach Dhaka the day before the function and will be the main speaker for 100th birth anniversary of the father of the nation and founder of Bangladesh Mujibur Rehman. Bangabandhu was also the father of Prime Minister Sheikh Hasina. 44th Kolkata Int'l Book Fair Begins. The 44th International Kolkata Book Fair began on Tuesday at Salt Lake Central Park in Kolkata amid festivity. 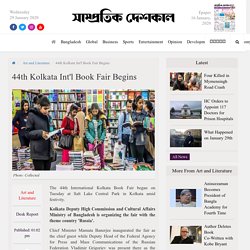 Kolkata Deputy High Commission and Cultural Affairs Ministry of Bangladesh is organizing the fair with the theme country 'Russia'. Chief Minister Mamata Banerjee inaugurated the fair as the chief guest while Deputy Head of the Federal Agency for Press and Mass Communications of the Russian Federation Vladimir Grigoriev was present there as the special guest, among others. Come Forward Further to Help Climate Vulnerable Countries: PM.

Prime Minister Sheikh Hasina on Wednesday asked the developed countries and development partners to come forward further to help the climate change vulnerable countries in a proper way, not to utter the volleys of pledges only. 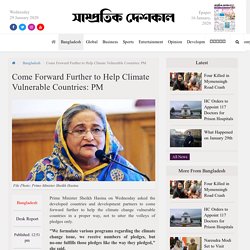 "We formulate various programs regarding the climate change issue, we receive numbers of pledges, but no-one fulfills those pledges like the way they pledged," she said. The Prime Minister said this while inaugurating the two-day Bangladesh Development Forum 2020 at Bangabandhu International Conference Center (BICC). Economic Relations Division (ERD), Ministry of Finance is organizing the BDF which is a high-level multi-stakeholder participatory forum, periodically hosted by the ERD, providing a platform for effective dialogues among development partners, national and international NGOs, development think tanks, development practitioners, leaders from business and industry. Brazil Floods kill 52.

Asian Shares Higher after Wall Street Rebound. Shares advanced in most Asian markets on Wednesday after a rebound on Wall Street that reversed most losses from a sell-off the day before. 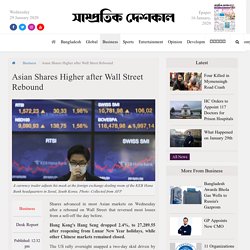 Hong Kong's Hang Seng dropped 2.4%, to 27,289.55 after reopening from Lunar New Year holidays, while other Chinese markets remained closed. The US rally overnight snapped a two-day skid driven by fears that the spread of a new virus in China could snag global economic growth. China reported Wednesday that the virus has sickened more than 6,000 people in China and over a dozen other countries and killed 132 people.

Foggy Weather May Persist till Thursday. The foggy weather which has been around since Wednesday morning is likely to persist until Thursday, the Met Office said. ''The sun will likely remain invisible today while light rain or drizzle might occur at a few places,'' AKM Nazmul Haque, a meteorologist of Bangladesh Meteorological Department said. 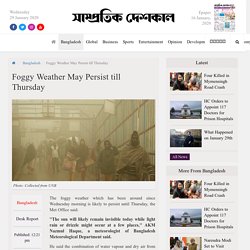 He said the combination of water vapour and dry air from the northern parts of the country created foggy weather. ''There’s a possibility of light rain,'' Nazmul said. According to the Met Office bulletin, light rain or drizzle is likely to occur at a few places over Rajshahi, Dhaka, Khulna, Barishal and Chattogram divisions and at one or two places over Rangpur, Mymensingh and Sylhet divisions. Light to moderate fog may occur at places over the country during late night to morning. Night and day temperature may remain nearly unchanged over the country, it said. Alastair Cook Replaces Shakib in MCC World Cricket Committee. Former England captain Sir Alastair Cook has been appointed to the MCC's world cricket committee. 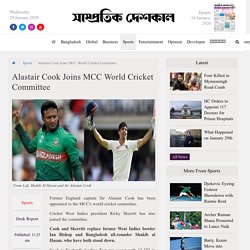 Cricket West Indies president Ricky Skerritt has also joined the committee. Cook and Skerritt replace former West Indies bowler Ian Bishop and Bangladesh all-rounder Shakib al Hasan, who have both stood down. Cook is England's leading Test run-scorer with 12,472 in 161 matches and captained England a record 59 times. The 35-year-old retired from England duty in 2018 but has continued to play county cricket for Essex. The committee is an independent panel of former and current players and umpires that can propose changes to the sport's laws. Other committee members include former Australia spinner Shane Warne, ex-Australia captain Ricky Ponting and former Sri Lanka batsman Kumar Sangakkara. Trumps Middle-East Peace Plan Proposals. 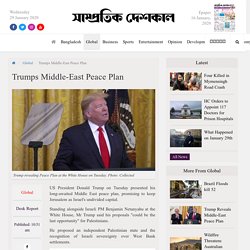 Standing alongside Israeli PM Benjamin Netanyahu at the White House, Mr Trump said his proposals "could be the last opportunity" for Palestinians. He proposed an independent Palestinian state and the recognition of Israeli sovereignty over West Bank settlements. Here are the Proposals: The US will recognize Israeli sovereignty over territory that Mr Trump's plan envisages being part of Israel.

The plan includes a conceptual map that Mr Trump says illustrates the territorial compromises that Israel is willing to makeThe map will "more than double the Palestinian territory and provide a Palestinian capital in eastern Jerusalem", where Mr Trump says the US would open an embassy. Trump Reveals Middle-East Peace Plan with Netanyahu. US President Donald Trump has presented his long-awaited Middle East peace plan, promising to keep Jerusalem as Israel's undivided capital. 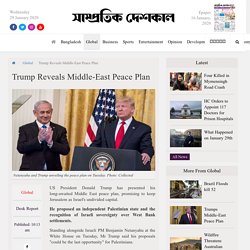 He proposed an independent Palestinian state and the recognition of Israeli sovereignty over West Bank settlements. Standing alongside Israeli PM Benjamin Netanyahu at the White House on Tuesday, Mr Trump said his proposals "could be the last opportunity" for Palestinians. Palestinian President Mahmoud Abbas dismissed the plans as a "conspiracy". Palestinian protesters carried pictures of Mahmoud Abbas through the streets of Ramallah on Tuesday"I say to Trump and Netanyahu: Jerusalem is not for sale, all our rights are not for sale and are not for bargain. Archive - Shampratik Deshkal. Deaths Rise to 132 As Foreigners Leave China. Countries on Wednesday began evacuating their citizens from the Chinese city hardest-hit by an outbreak of a new virus that has killed 132 people and infected more than 6,000 on the mainland and abroad. 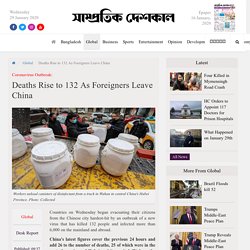 China's latest figures cover the previous 24 hours and add 26 to the number of deaths, 25 of which were in the central province of Hubei and its capital, Wuhan, the epicenter of the outbreak. The 5,974 cases on the mainland marked a rise of 1,459 from the previous day, although that rise is a smaller increase than the 1,771 new cases reported on Monday. Dozens of infections of the new type of coronavirus have been confirmed outside mainland China as well. A Japanese chartered flight carrying 206 evacuees from Wuhan included some who had coughs and fever on the plane, Kyodo News reported, citing health ministry officials. Australian Scientists First to Recreate Coronavirus Outside China. Scientists in Australia have become the first to recreate the new coronavirus outside of China in what they have called a "significant breakthrough". 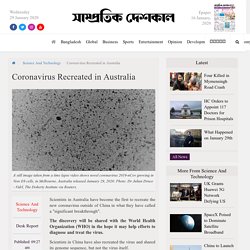 The discovery will be shared with the World Health Organization (WHO) in the hope it may help efforts to diagnose and treat the virus. Scientists in China have also recreated the virus and shared its genome sequence, but not the virus itself. Researchers at a specialist lab in Melbourne, Australia, said they were able to grow a copy of the virus from an infected patient.

The sample was sent to them last Friday. Uncertainty Looms on Roads and Railroads, 15 Killed in 8 Districts. At least 15 people were killed in road and train accidents in Gopalganj, Chattogram, Moulvibazar, Habiganj, Feni, Kurigram and Sylhet districts and the capital on Monday night and Tuesday. According to reports, three students were killed and another was injured after a train hit their bike at an unmanned level-crossing in Kashiani upazila in Gopalganj on Tuesday. The deceased were identified as Secondary School Certificate (SSC) examinee Md Yasin Sharif, 16, son of Farid Sharif, and Class-X students Md Rayhan Ruhin, 15, son of Ashraf Ali Mia, and Al Amin Khandakar, 15. DCC Polls: Voters Details Available via SMS. Recruit Qualified Teachers to Universities: UGC to VCs. Chairman of the University Grants Commission (UGC) Prof Dr. Kazi Shahidullah today urged the vice-chancellors of public and private universities to recruit qualified teachers for improving the quality of higher education.

“A qualitative change in higher education is not possible unless competent candidates are recruited as teachers. The quality of education provided by both public and private universities is gradually falling. Besides, the teaching quality of teachers at universities is also worsening,” he said. The UGC chairman was speaking at a workshop on the current status of IQACs at Private University and ways to step forward at the UGC.

Quader: All Padma Bridge Spans to Be Installed by July. India’s Claron to Kick Off Operation at Summit Technopolis in April 2020. Claron Fibre Optics, an Indian firm, recently signed a land lease agreement with Summit Technopolis to set up an optical fiber cable manufacturing unit in Bangabandhu Hi-Tech City in Kaliakoir, Gazipur. Summit group vice president Md Farid Khan was present at the event along with senior officials at a signing ceremony in Dhaka, a press release said. Under this deal, Summit Technopolis, a Summit Group subsidiary will provide relevant infrastructural assistance to Claron Fibre Optics for an outlay of expenditure of about $3 million.

This manufacturing facility will manufacture optical fibers primarily used for the telecommunication and ISP industries. The plant is likely to commence operation from April 2020, the release added. Train Hits Bike in Gopalganj; 3 Students Dead. Three students were killed and another wounded in today's Kashiani Upazila of Gopalganj after a train hit their bike at an unmarked level crossing. India’s Claron to Kick Off Operation at Summit Technopolis in April 2020.

GP Appoints New CMO. Coronavirus in Japanese Man Who Hadn’t Been to China. Japanese officials reported today that a man with no recent trip to China has contracted the novel coronavirus strain — probably after driving tourists from Wuhan, where a deadly outbreak began. Appoint 28 BCS Candidates within 60 Days: HC. FB, HSBC And Others Curb Travel to China As Warnings Grow. Facebook Inc and other global companies like LG Electronics Inc and HSBC are banning travel to China, as the death toll from a flu-like virus rose above 100 on Tuesday. Cold-Related Diseases Affected 4,244 in 24 Hrs. No Coronavirus Case in Bangladesh Yet: Minister. Flight Ready to Bring Back Students from China: Momen. Sylhet Goods Transport Strike Called Off. EU Expects Myanmar to Fully Comply With ICJ Order. The EU Ambassador and EU Member States' Ambassadors and Heads of Mission resident in Myanmar have said they expect the government of Myanmar to fully comply with the ICJ order in the interest of justice.

The country has meanwhile further tightened travel restrictions to curb the spread of the virus. Kobe Bryant Helicopter Crash: Investigator Look Into Weather. Weather conditions appear likely to come under authorities ' investigation over the helicopter crash that killed former NBA player Kobe Bryant, his girlfriend, and seven others near Los Angeles on Sunday when other flights were grounded in overcast skies and fog. The Bryant-owned Sikorsky S-76 chopper crashed into a steep hillside outside the town of Calabasas, California, about 40 miles (65 km) northwest of downtown Los Angeles, igniting a brush fire and scattering wreckage over a quarter-acre (1000 square meters) of grassy terrain. Hours later, Los Angeles County authorities said all nine people aboard the helicopter died in the crash.

BNP Asks EC to Not Use EVMs. Rakib's Hat-Trick Blows Away Scotland. BNP Enjoying Extra Benefit in Poll Campaigns: Info Minister. Anisul: Trial of Every Crime to Be Held As Per Law. Bangladesh Records in Tea Production in 2019. CAA Will Not Be Revoked: Amit Shah.