The ultimate brain map. Enzymes: The Proteins that Remind Us of Pac-Man. KScience. How Enzymes Work. Paleoclimatology: The Oxygen Balance : Feature Articles. As air cools by rising into the atmosphere or moving toward the poles, moisture begins to condense and fall as precipitation. 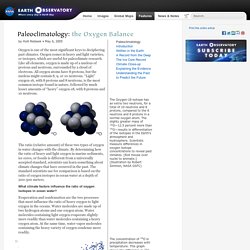 At first, the rain contains a higher ratio of water made of heavy oxygen, since those molecules condense more easily than water vapor containing light oxygen. The remaining moisture in the air becomes depleted of heavy oxygen as the air continues to move poleward into colder regions. As the moisture reaches the upper latitudes, the falling rain or snow is made up of more and more water molecules containing light oxygen. Ocean waters rich in heavy oxygen: During ice ages, cooler temperatures extend toward the equator, so the water vapor containing heavy oxygen rains out of the atmosphere at even lower latitudes than it does under milder conditions. 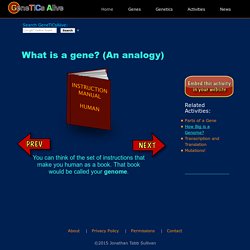 (An analogy) Every living organism on earth has a genome that is unique to that organism. Solve the Outbreak App. Download & Get Started Today! 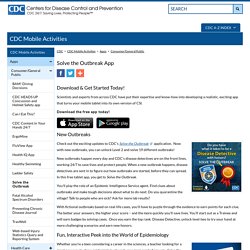 Scientists and experts from across CDC have put their expertise and know-how into developing a realistic, exciting app that turns your mobile tablet into its own version of CSI. Download the free app today! The Biology Corner. S BioInteractive. 30 Years After Chernobyl, Nature Is Thriving.

Limb Development. Genome: Unlocking Life's Code. Our molecular selves. Ethical, Legal and Social Implications of Genetic Knowledge. Riccardo Sabatini: How to read the genome and build a human being. How to Create a Chromosome Map. Recombination: During crossing-over (prophase I of Meiosis), genes on chromosomes switch places. 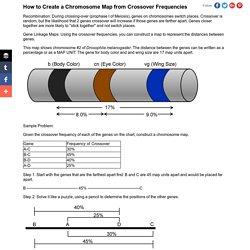 Crossover is random, but the likelihood that 2 genes crossover will increase if those genes are farther apart. Genes closer together are more likely to "stick together" and not switch places. Gene Linkage Maps: Using the crossover frequencies, you can construct a map to represent the distances between genes. This map shows chromosome #2 of Drosophila melanogaster. Membrane Channels - Membrane Channels, Membrane Potential, Cell Membrane.

Diffusion, osmosis and active transport. Substances are moving in and out of the cells of your body all the time. 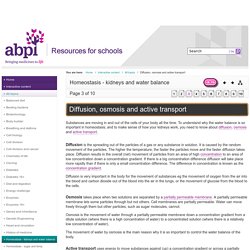 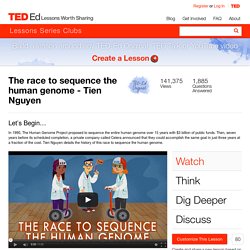 Create a DNA Fingerprint. The DDT Story. If there is a single pesticide almost everyone can name, it's DDT. 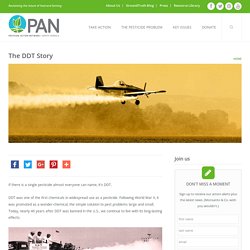 DDT was one of the first chemicals in widespread use as a pesticide. Following World War II, it was promoted as a wonder-chemical, the simple solution to pest problems large and small. Today, nearly 40 years after DDT was banned in the U.S., we continue to live with its long-lasting effects: Food supplies: USDA found DDT breakdown products in 60% of heavy cream samples, 42% of kale greens, 28% of carrots and lower percentages of many other foods.

Body burden: DDT breakdown products were found in the blood of 99% of the people tested by CDC. Differences between Eczema, Psoriasis, Couperose and Rosacea - Mario Badescu Skin Care. Which skin condition do you have? 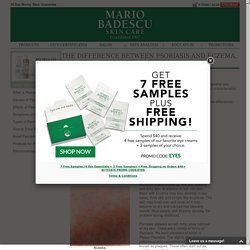 Do you have areas of red skin, perhaps some dry, itchy skin or even blisters or rash? There are several skin conditions—Eczema and Psoriasis as well as Rosacea and Couperose—which share a number of characteristics and which are, in some cases, indistinguishable from each other. The two most closely related skin conditions are Psoriasis and Eczema. Immunology in the skin. This TED Talk Shows How Mucus Is There To Keep Us Healthy. When you say mucus, most people automatically think of the stuff that comes out of a person’s nose when they're sick. 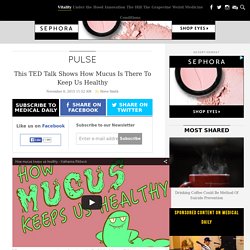 That is true, however — as disgusting as mucus may seem — it is actually keeping us healthy. In a recent TED Talk, speaker Katharina Ribbeck explains the various ways our mucus is actually looking out for us. Our body produces more than a liter of mucus per day. No, it’s not constantly dripping out of your nose without you knowing it. Instead, mucus can be found in our eyes, helping us blink; in our mouth, keeping it hydrated; and in our stomach, keeping acids at bay. Mucus contains a number of different compounds, including proteins, fats, and salts. Our Immune System ... Our Body's First Line of Defense! Germ Theory. How a few scientists transformed the way we think about disease - Tien Nguyen. Dr. 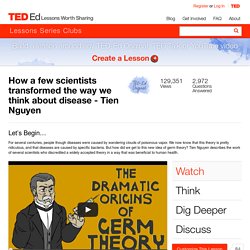 John Snow is considered as one of the fathers of epidemiology. He became interested in the cause of cholera after treating many patients afflicted with the disease. More details about his life and work can be foundhere. Dr. Robert Koch’s work in germ theory actually began with the study of Anthrax and led to the development of experiments that would link a bacterium to a disease. More than just a milkman- Louis Pasteur. Myriam Sidibe: The simple power of hand-washing. Wash 'Em - Hand Hygiene Music Video. Growing Bacteria - Petri Dish. How To Grow Bacteria. The Story of Cholera. Cholera is caused by Vibrio cholerae, a Gram negative, curved rod-shaped bacterium. For more information about its taxonomy and structure, go to the National Institutes of Health or the World Health Organization. Cholera caused discord when an outbreak in Haiti after the 2010 earthquake killed more than 8,000 citizens.

Flu Attack! How A Virus Invades Your Body. How Do Stem Cells Work? - Bang Goes the Theory - BBC. Stem Cells. Specialized Cells and Tissues. Protein Synthesis and the Lean, Mean Ribosome Machines. The Inner Life of the Cell full version. Inner Life of the Cell (Full Version - Narrated) From DNA to protein - 3D. Protein Synthesis in the Cellular Factory. How do your kidneys work? - Emma Bryce. Kidneys play a vital role in your body. Why are kidneys so important? Visit the National Kidney Foundation and find out more details about hypertension, diabetes and other ways they can become damaged. LOOP OF HENLE explained!! Newborn Baby Grey Kangaroo - Attenborough - Life of Mammals - BBC. What is Evolution? Myths and misconceptions about evolution - Alex Gendler.

"A human being, looking at the natural world, sees a thousand times purpose. A rabbit's legs, built and articulated for running; a fox's jaws, built and articulated for tearing. But what you see is not exactly what is there... " starts a blog by Eliezer Yudkowsky. Biological evolution is descent with modification. Animation - Miller-Urey Experiment. Carl Sagan Cosmos - The Stuff of Life. What Was The Miller-Urey Experiment? Plasma Membrane. The Cell: High School Biology. Insights into cell membranes via dish detergent - Ethan Perlstein. Cell Membranes Rap. Virtual Labs: Using the Microscope. Microscopes for the Masses. Video: Working with cells. Microsoft OneNote - Cornell Note taking for students. Notetaking. The Food Chain in the Wild - Animal Life In Action - Full Documentary. The simple story of photosynthesis and food - Amanda Ooten. The Habitable Planet Unit 4 - Ecosystems // Online Textbook.

Ecosystems maintain themselves by cycling energy and nutrients obtained from external sources. At the first trophic level, primary producers (plants, algae, and some bacteria) use solar energy to produce organic plant material through photosynthesis. Herbivores—animals that feed solely on plants—make up the second trophic level. Predators that eat herbivores comprise the third trophic level; if larger predators are present, they represent still higher trophic levels.

Organisms that feed at several trophic levels (for example, grizzly bears that eat berries and salmon) are classified at the highest of the trophic levels at which they feed. Decomposers, which include bacteria, fungi, molds, worms, and insects, break down wastes and dead organisms and return nutrients to the soil. On average about 10 percent of net energy production at one trophic level is passed on to the next level. Figure 6. Source: Ohio Environmental Protection Agency. Figure 7. Figure 8. Figure 9. The Delicate Balance Between Predators and Prey in the Forest Ecosystem. How the Inner Ear Balance System Works - Labyrinth Semicircular Canals. Ear Organ of Corti - Condensed Version. Ear Organ of Corti (Full Version) How the ear works. Rachel's Cochlear Implant turned on for the first time. How A Cochlear Implant Works by Advanced Bionics. Whales, Dolphins and Sound. Sound is very important to whales and dolphins for hunting, navigating and communicating. Toothed whales and baleen whales use sound quite differently.

Toothed whales and dolphins (for example killer whales and bottle-nose dolphins) use echolocation for hunting and navigating, while baleen whales (for example humpbacks and blue whales) generally produce a series of sounds which are frequently termed 'songs' that are used for communicating. Whale songs Whale songs consist of distinct sequences of groans, moans, roars, sighs and high pitched squeals that may last up to 10 minutes or longer. It is thought these sounds could be used for communicative purposes such as to identify other individuals, for long-range contact and to warn others of threats as well as navigation. Listen to whale songs Note: Both the blue whale and fin whale songs are five times their normal speed.