Do violent video games have an upside for kids? - Health. By Deborah Kotz Globe Staff | 11.29.13 | 3:22 PM How’s this for a little holiday shopping fodder as teenagers beg for the latest video shoot-out game? 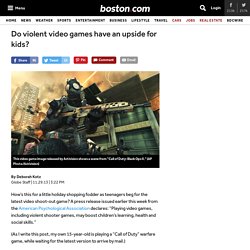 A press release issued earlier this week from the American Psychological Association declares: “Playing video games, including violent shooter games, may boost children’s learning, health and social skills.” (As I write this post, my own 15-year-old is playing a “Call of Duty” warfare game, while waiting for the latest version to arrive by mail.) The positive news about violent video games was based on a review paper published in the association’s journal American Psychologist in which Dutch researchers made a concerted effort to summarize research showing the upsides of playing these games. “Important research has already been conducted for decades on the negative effects of gaming, and we are certainly not suggesting that this should be ignored,” said study leader Isabela Granic, of Radboud University Nijmegen in The Netherlands. 1. 2. 3.

Why Kids play Violent Video Games. This new video game shows that there is more to war than guns and head shots. War is hell, but that's not the message most players would get from playing combat games like "Call of Duty. 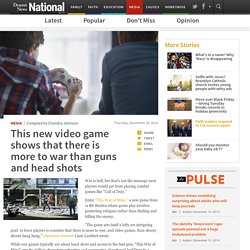 " Enter "This War of Mine," a new game from 11 Bit Studios where game play involves protecting refugees rather than finding and killing the enemy. "The game sets itself a lofty yet intriguing goal: to force players to consider that there is more to war, and video games, than shooty shooty bang bang," Gizorama reviewer Liam Lambert wrote. While war games typically are about head shots and access to the best gun, "This War of Mine" sees its civilian characters salvaging and scavenging abandoned buildings in a fictional Eastern European war zone while battling depression, sleep deprivation and even suicidal thoughts.

"It is a unique approach for a war game, highlighting the often ignored civilian struggle to survive rather than romanticizing soldiers on the front line," Digital Spy's Scott Nichols wrote. But to call the game "anti war" is too simplistic, says Wired's Matt Peckham. What 'GTA 5' Teaches Us About The Unsettling Future Of Immersion. The bloodier the game, the more hostile the gamer – Cognitive Daily. One big problem with many of the studies of video game violence is that they compare different games. 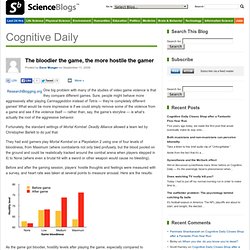 Sure, people might behave more aggressively after playing Carmaggeddon instead of Tetris — they’re completely different games! What would be more impressive is if we could simply remove some of the violence from a game and see if the violence itself — rather than, say, the game’s storyline — is what’s actually the root of the aggressive behavior. Fortunately, the standard settings of Mortal Kombat: Deadly Alliance allowed a team led by Christopher Barlett to do just that. They had avid gamers play Mortal Kombat on a Playstation 2 using one of four levels of bloodiness, from Maximum (where combatants not only bled profusely, but the blood pooled on the ground and could be realistically tracked around the combat arena when players stepped in it) to None (where even a brutal hit with a sword or other weapon would cause no bleeding). C Barlett, R Harris, C Bruey (2008). 8 Reasons Video Games Can Improve Your Child.

With Kids and Video Games, Moderation Is Key. Playing video games for less than an hour a day can have a positive influence on kids' mental health, a new study suggests. 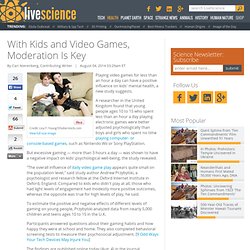 A researcher in the United Kingdom found that young people ages 10 to 15 who spent less than an hour a day playing electronic games were better adjusted psychologically than boys and girls who spent no time playing computer- or console-based games, such as Nintendo Wii or Sony PlayStation. But excessive gaming — more than 3 hours a day — was shown to have a negative impact on kids' psychological well-being, the study revealed. "The overall influence of daily video game play appears quite small on the population level," said study author Andrew Przybylski, a psychologist and research fellow at the Oxford Internet Institute in Oxford, England.

Compared to kids who didn't play at all, those who had light levels of engagement had modestly more positive outcomes, whereas the opposite was true for high levels of play, he said. Effects of gaming. Violent video games pressure our kids - Inishowen Indo Newspaper. Realism in games – a step in the wrong direction? Hello my pretties! 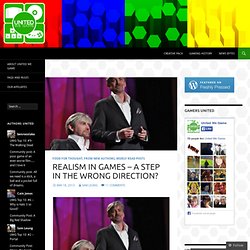 This week I’m writing on an issue that’s close to my heart – realism in games and the general trend in the games industry of making games that are more and more realistic. When it came out, everyone was gushing about Half Life 2‘s physics engine and the ability it gives you to manipulate objects or affect the environment in ways that closely mimic real life.

With every new innovation in technology, we are brought closer and closer to games that not only look like real life, but actually behaves like it and contains people that seem as solid as you or I. If you aren’t convinced, just take a look at Quantic Dream’s impressive tech demo: It’s incredible isn’t it? Children aged SIX exposed to shocking levels of 'violence and prostitution' through video games. Children as young as six are talking about 'brothels' in school after playing video games that expose them to scenes of violence and prostitution, a new survey has revealed. 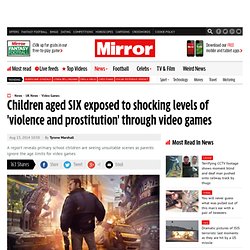 Just over half the parents surveyed said their children aged between six and 17 played video games when they are below the age limit for that game. Experts said shooter games like Grant Theft Auto and Call of Duty were too graphic for young children to play and that some parents were unaware of what content was in the game. The survey, conducted by YouGov for 5 News, also revealed 21% of parents say they’re concerned about the violent content. Some 24% say they notice a negative change in behaviour after they have played the games and 57% say they believe their children can handle the content in the restricted games. "And then dependant on how satisfied you are with the performance of that prostitute you can then murder or mutilate them and go back around and buy another prostitute.

Are Games striving towards realism? Such as Photo-Realism or Hyper-Realism - General Gaming - Videogamer.com Community. The risk of realism is that it can look dated after a while, e.g. 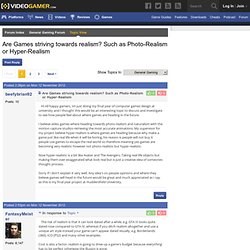 GTA III looks quite dated now compared to GTA IV, whereas if you ditch realism altogether and use a unique art style instead your game can't appear dated visually, e.g. Borderlands (360), ICO (PS2) and many other examples. Cost is also a factor, realism is going to drive up a game's budget because everything has to be perfect otherwise the illusion is gone. So whilst there are now a multitude of tools available for small developers to have a crack at photo-realism, I think for the next decade at least it's safe to say that only the biggest publishers are going to be able to really push the boundaries of what is possible on hardware, simply because of cost. It probably doesn't require mentioning, but if you have a £50 million budget and produce the most realistic game ever, people are going to be hyped about it.