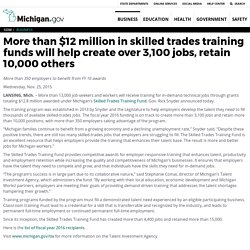 Rick Snyder announced today. FACT SHEET: How Bold Investments By the Administration in the Auto Industry and City of Detroit Put Americans Back to Work and Strengthened the Economy. During his State of the Union address, President Obama focused on America’s future and discussed the progress we’ve made on the economy since 2009. 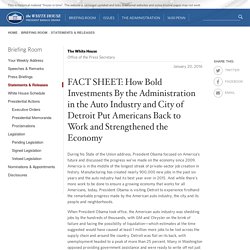 America is in the middle of the longest streak of private-sector job creation in history. Manufacturing has created nearly 900,000 new jobs in the past six years and the auto industry had its best year ever in 2015. What Role Did The Auto Industry Play In Detroit's Decline? Detroit bankruptcy's effect on auto industry boom. The move toward restructuring may not come as a surprise to some, being the culmination of a half-year's worth of financial insecurity. 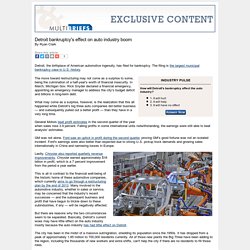 In March, Michigan Gov. Rick Snyder declared a financial emergency, appointing an emergency manager to address the city's budget deficit and billions in long-term debt. What may come as a surprise, however, is the realization that this all happened while Detroit's big three auto companies did better business — and subsequently pulled out a better profit — than they have in a very long time. General Motors beat profit estimates in the second quarter of the year when sales rose 3.9 percent.

What A Bankrupt Detroit Means For The Auto Industry.