Now, smartglasses to manage airports better. Nokia smartphones to be launched on June 13; here's what's special about them. The new home of Nokia Phones, HMD Global, is organising an event on June 13 that could see the official launch of the Nokia 6, Nokia 5 and Nokia 3 smartphones in the price-conscious Indian smartphone market. 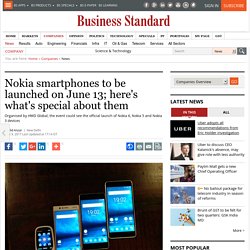 While the company has not specified the occasion of the event, but it is understood that the series of Nokia smartphones based on the Google Android platform are going to be launched by HMD. Launched with much fanfare at the Mobile World Congress (MWC), the series has the Nokia 6, the first Nokia device to boot Android operating system, besides Nokia 5 and Nokia 3, which mid-range smartphones offering a balance of Nokia’s hardware and the much-loved Android platform as default operating system. 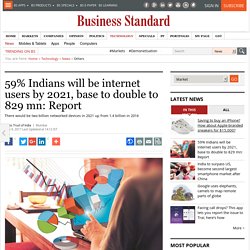 This means roughly 59 per cent of the Indian population will use the internet. Also, there would be two billion networked devices in 2021 up from 1.4 billion in 2016. Overall IP traffic is expected to grow 4-fold during the same period of five years at a compounded annual growth rate of 30 per cent, the Cisco Visual Networking Index (VNI) Complete Forecast said. "Combining device capabilities with faster, higher bandwidth and more intelligent networks is leading to wide doption of high bandwidth data, video and advanced multimedia applications that contribute to increased mobile and Wi-Fi traffic," said Sanjay Kaul, Managing Director, Service Provider Business, Cisco India SAARC.

Facing call drops? This app lets you report the issue to Trai; here's how. The Telecom Regulatory Authority of India (Trai) has introduced ‘MyCall’ app, which allows you to report about call drops, poor voice quality and other such issues with your telecom service, directly to the authority. 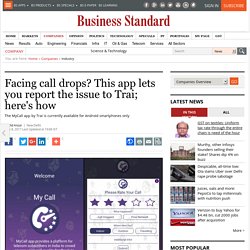 The MyCall app is an initiative to help telecom subscribers in India crowdsource voice call quality feedback so that they can make better decision on selecting their service provider. Trai's MyCall app is currently available only on the Google Android platform and can be downloaded at Play Store. The app is easy to use and has several features that allow you to provide a detailed feedback without having to fill up long forms or open specific portals. Business Standard reviewed the app to understand how it works. Facebook launches 'disaster map' to share data with relief organisations.

Facebook has introduced disaster maps to help organisations address a critical gap in the information they often face while responding to natural disasters. 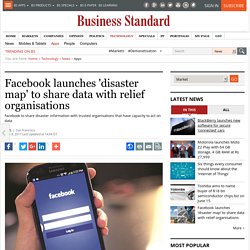 Based on the aggregated location information users have chosen to share with Facebook, three types of maps; location density maps, movement maps and safety check maps, are to be provided during disaster response efforts. Even below Pak! India's 4G speed is three times slower than global average. Even though India has reached the 15th spot in 4G availability globally, the average download speed of 5.1 Mbps in the country is less than a third of the global average and only marginally higher than the global 3G speed of 4.4 Mbps, revealed a report by OpenSignal, a London-based wireless coverage mapping company. 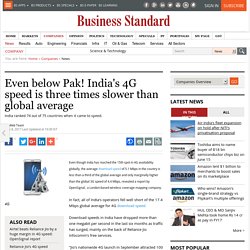 In fact, all of India's operators fell well short of the 17.4 Mbps global average for 4G download speed. Download speeds in India have dropped more than one megabit per second in the last six months as traffic has surged, mainly on the back of Reliance Jio Infocomm’s free services. "Jio's nationwide 4G launch in September attracted 100 million LTE subscribers, making 4G services far more accessible in India but at the expense of lower average speeds," said the report. India, which ranked 74th out of 75 countries, came below the likes of Pakistan and Sri Lanka and just ahead of Costa Rica in terms of speed. Micromax Yu Yureka Black hits the sweet spot, ticks almost all right boxes. Home-grown smartphone manufacturer Micromax on Thursday launched the Yu Yureka Black, a smartphone coming from the company after a rather silent gap of four months. 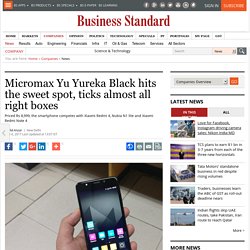 Bad news for Apple users: iOS 11 won't allow Facebook, Twitter sync in. Over the years Facebook has made it easier for its users to log into the third-party apps through its platform but not anymore as Apple has introduced a feature in iOS 11 that will prevent them to log into third-party apps using a social media account. 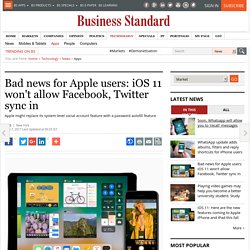 Apple announced this subtle change to the system settings at its Worldwide Developers Conference (WWDC) in San Jose on Monday. Without system-level integration, iOS may fall back on the mobile web, The Verge reported. "Log into Facebook once in mobile Safari and when you go to log in to a third-party app using a social network, it should be able to remember you. On 3rd anniversary, PM Modi to inaugurate India's longest bridge in Assam. On his third anniversary of taking over as Prime Minister, Narendra Modi will be in Assam on Friday to inaugurate a number of projects, including the country's longest bridge — the Dhola-Sadiya Bridge. 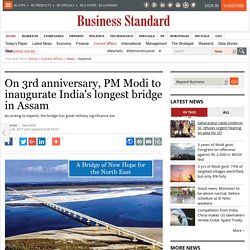 Referring to the Dhola-Sadiya bridge, the prime minister said, "This is one of the most important infrastructure projects in our nation. " Uncertainty over class XII results, CBSE likely to challenge Delhi HC. Uncertainty prevails over the announcement of class XII CBSE results as the board is likely to challenge a Delhi High Court order allowing continuation of its moderation policy on extra marks which was scrapped last month. 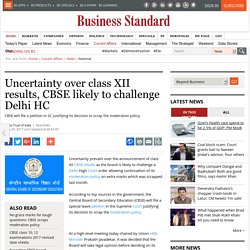 According to top sources in the government, the Central Board of Secondary Education (CBSE) will file a special leave petition in the Supreme Court justifying its decision to scrap the moderation policy. At a high-level meeting today chaired by Union HRD Minister Prakash Javadekar, it was decided that the Board will take legal opinion before deciding on its future course of action. "Legal opinion was sought and it was decided that the board may challenge the order and results will be announced on basis of the decision," a source said. Expecting CBSE board results? No clarity so far. The CBSE board exams for Class 10 and Class 12 were conducted from March 9. 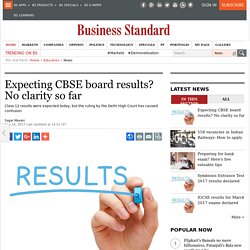 24 dead, 8 injured as bus plunges into deep gorge in Uttarakhand. At least 24 persons were killed and eight others injured when the bus they were travelling in plunged into a deep gorge in Uttarakhand late on Tuesday, police said. Manchester Arena attack: 19 dead after explosion at Ariana Grande concert. At least 19 people have been killed and 50 injured in an explosion which is treated as a "terrorist incident", at a pop concert by US star Ariana Grande in the Manchester city in the UK, police said today.

"Police were called to reports of an explosion at Manchester Arena. So far 19 people have been confirmed dead with around 50 others injured," Greater Manchester Police said in a statement. "This is currently being treated as a terrorist incident until police know otherwise," the statement said. Full GST rate list: Here are the tax rates for all goods and services. Triple talaq is a personal law, courts cannot interfere: Salman Khurshid. Congress leader and Amicus curiae in the triple talaq matter, Salman Khurshid, on Friday declined to comment on the Islamic divorce practice, saying that the matter has been presented before the Supreme Court and now the decision lies with the judges.