Ludmila Ulitskaya. Boy, Snow, Bird by Helen Oyeyemi. My Life in Middlemarch by Rebecca Mead. Half Bad by Sally Green. The Orchard of Lost Souls. Wittgenstein Jr » Melville House Books. The writer Hari Kunzru says “made me feel better about the Apocalypse than I have in ages” is back—with a hilarious coming-of-age love story The unruly undergraduates at Cambridge have a nickname for their new lecturer: Wittgenstein Jr. 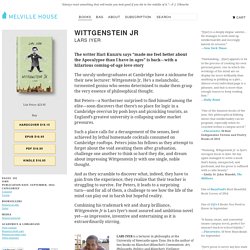 He’s a melancholic, tormented genius who seems determined to make them grasp the very essence of philosophical thought. But Peters—a Northerner surprised to find himself among the elite—soon discovers that there’s no place for logic in a Cambridge overrun by posh boys and picnicking tourists, as England’s greatest university is collapsing under market pressures. Such a place calls for a derangement of the senses, best achieved by lethal homemade cocktails consumed on Cambridge rooftops.

Peters joins his fellows as they attempt to forget about the void awaiting them after graduation, challenge one another to think so hard they die, and dream about impressing Wittgenstein Jr with one single, noble thought. “Stunning. “Superbly done … Iyer wins on laughs.” The String Diaries by Stephen Lloyd Jones. A family is hunted by a centuries-old monster: a man with a relentless obsession who can take on any identity. 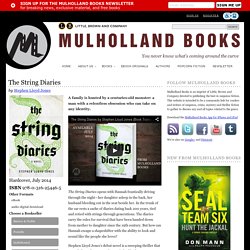 The String Diaries opens with Hannah frantically driving through the night—her daughter asleep in the back, her husband bleeding out in the seat beside her. In the trunk of the car rests a cache of diaries dating back 200 years, tied and retied with strings through generations. The diaries carry the rules for survival that have been handed down from mother to daughter since the 19th century. A Brave Man Seven Storeys Tall - Will Chancellor - Hardcover. About the Book A beautiful and compulsively readable literary debut that introduces Owen Burr—an Olympian whose dreams of greatness are dashed and then transformed by an epic journey—and his father, Professor Joseph Burr, who must travel the world to find his son. 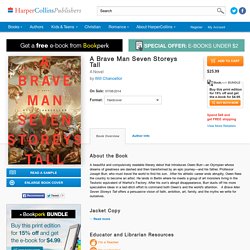 After his athletic career ends abruptly, Owen flees the country to become an artist. The Iceland by Sakutaro Hagiwara at New Directions. Jeff VanderMeer. The Vacationers by Emma Straub. Official Publisher Page. You 1 YOU walk into the bookstore and you keep your hand on the door to make sure it doesn’t slam. 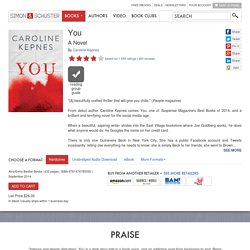 You smile, embarrassed to be a nice girl, and your nails are bare and your V-neck sweater is beige and it’s impossible to know if you’re wearing a bra but I don’t think that you are. You’re so clean that you’re dirty and you murmur your first word to me—hello—when most people would just pass by, but not you, in your loose pink jeans, a pink spun from Charlotte’s Web and where did you come from? 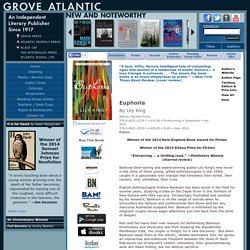 Grove Press was founded on Grove Street in New York’s Greenwich Village in 1947. But its true beginning came in 1951 when twenty-eight-year-old Barney Rossett, Jr. bought the company and turned it into one of the most influential publishers of the 1950s, 60s, and 70s. A Girl is a Half-formed Thing. Silence Once Begun by Jesse Ball. About the Book The questions for discussion contained in this guide are designed to enhance your reading group’s discussion of Silence Once Begun. 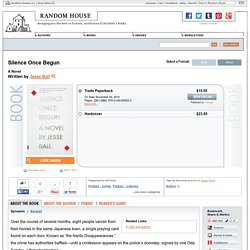 The themes in this novel are varied and complex. If there are time constraints to your discussion, you may want to focus on one particular theme. About the Guide Jesse Ball solidifies his growing reputation as a significant and gifted novelist in his major hardcover fiction debut. All the Birds, Singing by Evie Wyld. About the Book This guide is designed to enhance your reading group’s focus on some of the main concepts in this book and to enable readers to explore and share different perspectives. 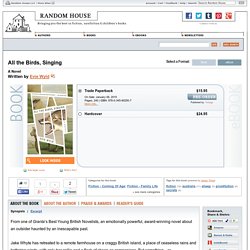 Feel free to wander in your discussions, and use this as a guideline only. Nobody Is Ever Missing. Never Have I Ever - Hachette Book Group. "I've been single for my entire life. 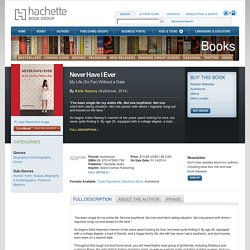 Not one boyfriend. Not one short-term dating situation. Not one person with whom I regularly hung out and kissed on the face. " So begins Katie Heaney's memoir of her years spent looking for love, but never quite finding it. By age 25, equipped with a college degree, a load of friends, and a happy family life, she still has never had a boyfriend...and she's barely even been on a second date.

Throughout this laugh-out-loud funny book, you will meet Katie's loyal group of girlfriends, including flirtatious and outgoing Rylee, the wild child to Katie's shrinking violet, as well as a whole roster of Katie's ill-fated crushes. Funny, relatable, and inspiring, this is a memoir for anyone who has ever struggled to find love, but has also had a lot of fun in the process. Have Passport Will Travel (419 books) 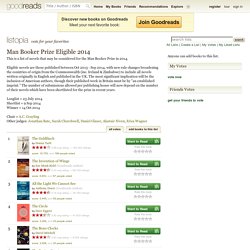 Eligible novels are those published between Oct 2013 - Sep 2014, with new rule changes broadening the countries of origin from the Commonwealth (inc. Ireland & Zimbabwe) to include all novels written originally in English and published in the UK. The most significant implication will be the inclusion of American authors, though their published work in Britain must be by "an established imprint. " Sword and Laser Fantasy List (660 books) New York Times 100 Notable Books of 2012 (100 books) Buying Choices: Geisha: A Photographic History, 1872-1912. NOVEMBER 2013 LIBRARY READS (10 books) 2013: What Women Born In The 70s Read In 2013 (2993 books) Interesting Books of 2013 (313 books) Smart Summer Reads (1393 books) Fiction ALL Girls Should Read (71 books) Best Crime & Mystery Books (4435 books) Best Literary Mysteries (609 books) Best Historical Mystery (986 books)

Best Multicultural General Fiction (215 books) Best Books with a POC Protagonist (21 books) Diversity in Fantasy and Science Fiction (176 books) Finnikin of the Rock (Lumatere Chronicles, #1) by Melina Marchetta. Last Train to Istanbul: A Novel by Ayşe Kulin. Deerskin by Robin McKinley. The Road by Cormac McCarthy. The Witch Family by Eleanor Estes. The Thief of Always by Clive Barker. Tales from Outer Suburbia by Shaun Tan. The House With a Clock in Its Walls (Lewis Barnavelt, #1) by John Bellairs. Best for Book Clubs (3380 books) The Guernsey Literary and Potato Peel Pie Society by Mary Ann Shaffer. Best Action-Adventure Novels (920 books) History through Novels: 1900s/2000s Middle East (63 books) Africa's 100 Best Books of the 20th Century (100 books) Over the last hundred years African writers have written of their lives, experiences, culture, history and myth; they have written in diverse forms, styles and in many languages. 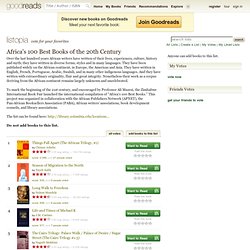 They have been published widely on the African continent, in Europe, the Americas and Asia. They have written in English, French, Portuguese, Arabic, Swahili, and in many other indigenous languages. And they have written with extraordinary originality, flair and great integrity. Nonetheless their work as a corpus deriving from the African continent remains largely unknown and uncelebrated. Books Set in Morocco (83 books) A Complicated Kindness by Miriam Toews. The Ultimate U.S. Road Trip Reading List. Beware the Wild by Natalie C. Parker. Outliers: The Story of Success by Malcolm Gladwell. Biography and Memoirs that are BETTER than Fiction (564 books) Science Fiction - 2010-2019 (114 books) Snow Falling on Cedars by David Guterson. The Sun Never Sets On The British Empire (164 books) Best for Backpacking through Southeast Asia (219 books) The Long Day Wanes: A Malayan Trilogy by Anthony Burgess. February Flowers by Fan Wu. Miss Chopsticks by Xinran.

Love Marriage by V.V. Ganeshananthan. Of Marriageable Age by Sharon Maas. Lyrics Alley by Leila Aboulela. The Harmony Silk Factory by Tash Aw. The Calligrapher's Daughter by Eugenia Kim. The Sari Shop by Rupa Bajwa. Evening Is the Whole Day by Preeta Samarasan. The Private Papers of Eastern Jewel by Maureen Lindley. A Breath of Fresh Air by Amulya Malladi. The Moon Pearl by Ruthanne Lum McCunn. When the Elephants Dance by Tess Uriza Holthe. Notable Books by Pakistani Authors (78 books) I Love Dick by Chris Kraus. Staff Pick Is it a stalking case? A feminist performance-art project? An art scandal? A memoir? Or epistolary novel? Synopses & Reviews In I Love Dick, published in 1997, Chris Kraus, author of Aliens & Anorexia, Torpor, and Video Green, boldly tore away the veil that separates fiction from reality and privacy from self-expression.

The story is gripping enough: in 1994 a married, failed independent filmmaker, turning forty, falls in love with a well-known theorist and endeavors to seduce him with the help of her husband. I Love Dick is a manifesto for a new kind of feminist who isn't afraid to burn through her own narcissism in order to assume responsibility for herself and for all the injustice in world — and it's a book you won't put down until the author's final, heroic acts of self-revelation and transformation. Review: "Devastatingly funny and sublime. . . a new classic.andquot;— The Seattle Stranger.

The Mysteries of Pittsburgh (P.S.) by Michael Chabon. Staff Pick Pulitzer Prize-winner Chabon's first novel (written for his master's thesis at UC Irvine) was published when he was twenty-five, and quickly became a bestseller. Set in the steel ciy, this hilarious coming-of-age story tells the tale of Art Bechstein's first summer after college. Themes, such as confused sexuality, identity crises, and displaced ambitions, and vivid characters (a father who is a Jewish mobster, a capricious librarian named Phlox) combine to form an uproarious and lyrical narrative. Strong characterizations and resplendent prose mark Chabon's debut, an unforgettable book that is both charming and poignant.

"This breathtaking elegant and unsentimental first novel is about passion, regret, and memory: about the psychology of the spot where recollection and loss intersect. " Tales of the City (Tales of the City Series #1) by Armistead Maupin. Out of Print Synopses & Reviews Armistead Maupin's Tales of the City has blazed a singular trail through popular culture — from a groundbreaking newspaper serial to a classic novel to a television event that entranced millions around the world. The first of six novels about the denizens of the mythic apartment house at 28 Barbary Lane, Tales is both a wry comedy of manners and a deeply involving portrait of a vanished era.

Review: "An enormously talented writer — witty but always sympathetic, generous in showing us the secrets of his heart...By writing about what's seemingly different Armistead Maupin always manages to capture what's so hilariously painfully true for all of us. " "An extended love letter to a magical San Francisco. " The Post-Birthday World (P.S.) by Lionel Shriver. Synopses & Reviews American children's book illustrator Irina McGovern enjoys a secure, settled life in London with her smart, loyal, disciplined partner, Lawrence — until the night she finds herself inexplicably drawn to kissing another man, a passionate, extravagant, top-ranked snooker player.

Two competing alternate futures hinge on this single kiss, as Irina's decision — to surrender to temptation or to preserve her seemingly safe partnership with Lawrence—will have momentous consequences for her career, her friendships and familial relationships, and the texture of her daily life. Review: "The smallest details of staid coupledom duel it out with a lusty alternate reality that begins when a woman passes up an opportunity to cheat on her longtime boyfriend in Shriver's latest (after the Orange Prize-winning We Need to Talk About Kevin).

"[T]he two versions are seamlessly knit, and in the end both are convincing and beautifully told. A Single Man by Christopher Isherwood. Staff Pick. The Woman Upstairs by Claire Messud. Cruel Beauty by Rosamund Hodge. Foreign Books Translated To English (343 books) The Story of Edgar Sawtelle by David Wroblewski. The Alchemyst (The Secrets of the Immortal Nicholas Flamel, #1) by Michael Scott.