Democrats’ Dumbest Complaint: Senate & Electoral College Unfair? Parents: Stop Scaring Your Kids About the Election - Acculturated. The morning after the election, I vowed not to go on Facebook . . . and then promptly logged on. 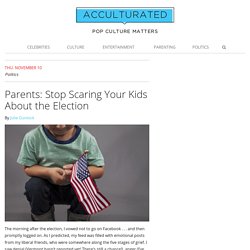 As I predicted, my feed was filled with emotional posts from my liberal friends, who were somewhere along the five stages of grief. Kathy Shelton Rape Case: 5 Fast Facts You Need To Know. Kathy Shelton of Springdale, Arkansas, is now 54 years old. 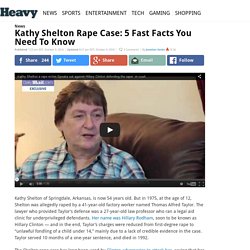 But in 1975, at the age of 12, Shelton was allegedly raped by a 41-year-old factory worker named Thomas Alfred Taylor. The lawyer who provided Taylor’s defense was a 27-year-old law professor who ran a legal aid clinic for underprivileged defendants. Her name was Hillary Rodham, soon to be known as Hillary Clinton — and in the end, Taylor’s charges were reduced from first-degree rape to “unlawful fondling of a child under 14,” mainly due to a lack of credible evidence in the case. Taylor served 10 months of a one-year sentence, and died in 1992. The Shelton rape case has long been used by Clinton adversaries to attack her, saying that her defense of Taylor makes her a hypocrite when she claims to be an advocate for women and sexual assault victims. What really happened in the controversial Shelton case? 1. Shelton never came forward publicly until 2016, when she gave an interview to Britain’s Daily Mail newspaper. An Actual Conservative's Guide To The Alt-Right: 8 Things You Need To Know.

Dailywire. Edward Snowden Report by House Intelligence Committee Confirms He Shouldn't Be Pardoned. At a time of extreme partisanship in our country and in the midst of what may be the most contentious presidential election in U.S. history, a congressional committee did something extraordinary: It issued a bipartisan and unanimous report on an extremely divisive issue. 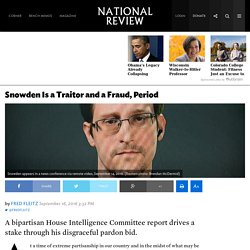 This issue is whether former National Security Agency technician Edward Snowden, who stole 1.5 million classified documents and leaked thousands to the news media, is a true whistleblower or a traitor. The report by the House Permanent Select Committee on Intelligence (where I worked for five years) found what many of us have long argued: Snowden is not a whistleblower; he is a disgruntled former intelligence employee who did enormous damage to U.S. national security. Click here to read the unclassified summary of this report. The five findings in the committee report’s unclassified summary are stunning. Snowden Caused Tremendous Damage to National Security. Neo-neocon » Blog Archive » Mr. Trump regrets. There’s been a lot of praise for a prepared speech Donald Trump gave last night in North Carolina that emphasized his role as a voice for the common man/woman against a corrupt elite. 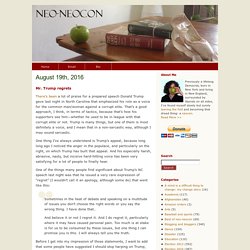 That’s a good approach, I think, in terms of tactics, because that’s how his supporters see him—whether he used to be in league with that corrupt elite or not. Trump is many things, but one of them is most definitely a voice, and I mean that in a non-sarcastic way, although I may sound sarcastic. One thing I’ve always understand is Trump’s appeal, because long long ago I noticed the anger in the populace, and particularly on the right, on which Trump has built that appeal.

And his especially harsh, abrasive, nasty, but incisive hard-hitting voice has been very satisfying for a lot of people to finally hear. Sometimes in the heat of debate and speaking on a multitude of issues you don’t choose the right words or you say the wrong thing. Lessons on Free Trade From the Great Depression. » Gary Johnson Says Hillary is No Criminal.

Yesterday’s announcement by FBI Director James Comey, outlining the many indiscretions involved in Hillary Clinton’s use of a private email server, seemed to be building toward a clear indictment. 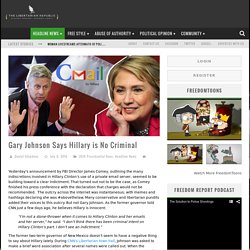 Neo-neocon » Blog Archive » Who is Paul Ryan and why do all these people hate him? I never intended for this blog to become Paul Ryan headquarters. 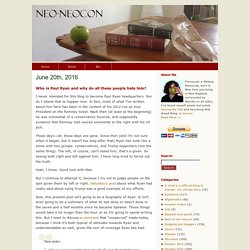 Nor do I intend that to happen now. In fact, most of what I’ve written about him here has been in the context of his 2012 run as Vice President on the Romney ticket. Trump's Ideas about Immigration are as Dumb as Hillary's Ideas about Gun Control. One of the things that is endlessly annoying about gun control advocates is the way they are always proposing solutions that, by their own admission, would not have prevented the latest tragedy they are politicizing. 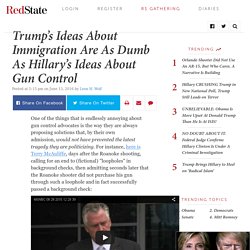 For instance, here is Terry McAuliffe, days after the Roanoke shooting, calling for an end to (fictional) "loopholes" in background checks, then admitting seconds later that the Roanoke shooter did not purchase his gun through such a loophole and in fact successfully passed a background check: This is a common song and dance routine that is designed to obfuscate the fact that liberals just don't want people to own guns, period, and so they want to make it as difficult and onerous as possible to own guns, without regard for whether the policy they are proposing has any reasonable relation to the tragedies they are allegedly trying to prevent.

Know who else suffers from this problem? Donald Trump: Yes, Donald Trump has been linked to the mob. Donald Trump "seems terrified to release his taxes" because they may reveal his true net worth, his donations to liberal causes, or something even seedier, Sen. 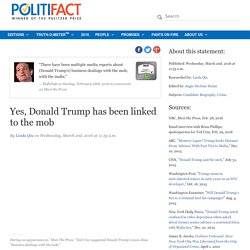 Ted Cruz suggested on Meet the Press. Neo-neocon » Blog Archive » Trump’s solution to the debt. For those of you who say that there’s no way Donald Trump could be a worse president than Hillary Clinton, I put before you this story: Asked whether the United States needed to pay its debts in full, or whether he could negotiate a partial repayment, Mr. 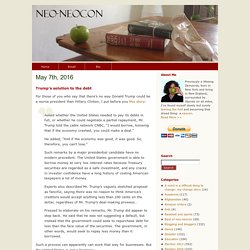 Trump told the cable network CNBC, “I would borrow, knowing that if the economy crashed, you could make a deal.”He added, “And if the economy was good, it was good. So, therefore, you can’t lose.”Such remarks by a major presidential candidate have no modern precedent. The United States government is able to borrow money at very low interest rates because Treasury securities are regarded as a safe investment, and any cracks in investor confidence have a long history of costing American taxpayers a lot of money.Experts also described Mr.

Sowell: An Unmitigated Disaster. Libertarian Party Presidential Candidate’s Moment Is Now. Good news, disgruntled Americans: As you ponder whether to vote for one of the two most-disliked, dishonest, and morally corrupt politicians ever to run for president — Donald Trump and Hillary Clinton — you just might have a third option. 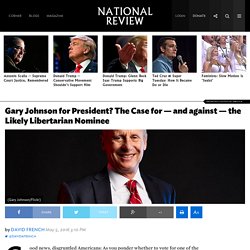 His name is Gary Johnson. He’s a popular two-term former governor of New Mexico. He’s the likely Libertarian party nominee. And he’s set to be on the ballot in the vast majority of states. Moreover, the short case for him is pretty compelling. I didn’t leave the Republican party; the Republican party left me *UPDATED* Having thought about it a lot, I’m about to commit what many will believe is heresy: I believe conservatives should suck it up and vote for Trump so as to avoid a hard Left presidency. Trying to save the Republican party at this juncture is an intellectual and practical dead-end, akin to doing CPR on a pulse-free heart attack victim even as the sarin gas is leaking under the door, through the keyhole, and over the transom.

Finally, science shows that politicians are lying liars who lie. WASHINGTON — This is the season of lies. We watch with fascination as candidates for the world’s most powerful job trade falsehoods and allegations of dishonesty. Republican presidential candidate Donald Trump routinely calls rival Ted Cruz “Lyin’ Ted.” Ted Cruz and The Moral Equivalence Litmus Test. Before getting to the meat of this post I just want to say that I’m incredibly proud of Marco Rubio and his campaign. I believe in Marco, and I saw how humble, passionate, and decent he was. In a better world a man of good character, such as Marco, would have an easier path to the White House. The Soft Bigotry of Trump’s Explainers. One of the most enduring phrases from George W. Bush’s presidency was the “soft bigotry of low expectations.” Demanding less from people by abandoning traditional benchmarks of achievement in the belief this would help them succeed, Bush argued, is paternalistic, especially so when applied to historically disadvantaged racial groups.

Bush uttered his admonition in a 2000 speech to the NAACP announcing his No Child Left Behind education initiative. Holding inner-city black kids to a lower standard than those in largely white, wealthier districts, Bush told his African American audience, unfairly limits their potential. Bush’s critique was largely directed at liberals who argued against uniform national education standards on account that they inherently discriminate against poor and minority students. Paul Ryan Should Seize the GOP's Agenda Away from Cruz & Trump. Inconvenient Genocide. The Christian communities of Iraq, Syria, Egypt and Lebanon are well on the way to joining their Jewish cousins.

The Jewish communities of these states predated Islam by a millennium, and were vibrant until the 20th century. But the Arab world’s war on the Jewish state, and more generally on Jews, wiped out the Jewish populations several decades ago. And now the Christian communities, which like the Jews, predate Islam, are being targeted for eradication. Bernie Sanders Responds to Anti-Semitic Rant by Disavowing Zionism. FACT CHECK: Bernie Sanders is Not Qualified To Be Anything. There has recently been some debate over whether Bernie Sanders is qualified to be president.

Swedish Economist Schools Sanders On The Ravages Of Socialism. Election ’16: Socialist Bernie Sanders believes nations “like Denmark, like Sweden, and Norway” employ the welfare-state economic model that the U.S. should replicate. Bernie Sanders: Socialism = Cops. Socialism: Evil and Stupid. Donald Trump Is No Ronald Reagan. ‘Ronald Reagan is dead, and he’s not coming back.” Donald and Ivana Trump's Divorce: The Full Story.