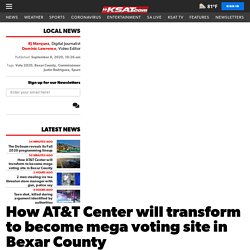 Instead of being filled with cheering Spurs fans, it will host voters as it’s transformed this October and November into a mega voting site for the first time in its history. The NBA and National Basketball Players Association agreed on Aug. 28 to allow teams to use their home arenas as polling places after a walkout by players in response to the police shooting of Jacob Blake in Wisconsin. But Spurs Sports and Entertainment and Bexar County, which owns the AT&T Center, had already been discussing the use of the arena for election purposes for months. “We had conversations with the Spurs and their general counsel going back to probably May,” said Justin Rodriguez, Precinct 2 county commissioner. Rodriguez said the key discussions surrounding the use of the East Side arena came down to voter access, maximizing space inside the facility and keeping residents as safe as possible during the COVID-19 pandemic. 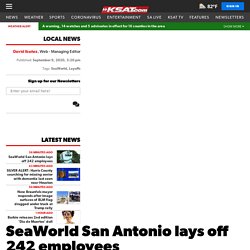 According to SeaWorld San Antonio Park President Byron Surrett, the COVID-19 pandemic took a toll on the theme park’s attendance and revenue. Even though the park opened in June at a reduced operating schedule and guest capacity after being shut down in March, it couldn’t recover due to " self-imposed limitations and consumer concerns regarding COVID-19 and other factors. " “The effects upon the amusement and theme park industry have been significant and sustained,” Surrett said in the filing. The layoffs went into effect on Sept. 4 and employees affected will get information about eligibility for separation benefits, Surrett said. Full-time and salaried employees will be given four weeks of severance pay. The following statement was emailed to KSAT 12 News regarding the layoffs: Copyright 2020 by KSAT - All rights reserved. 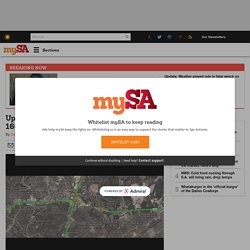 Photo: TXDOT San Antonio police have shut down a portion of Loop 1604 after a major accident Wednesday morning. Photo: TXDOT Update: Fatal accident shut down Loop 1604 for several hours Wednesday morning Part of Loop 1604 was shut down Wednesday morning after a 26-year-old man was killed in a crash on the North Side. San Antonio police said the victim was driving near the 1600 block of N Loop 1604 just after 6 a.m., when two vehicles in front of him hydroplaned on the slick road. FIND OUT FIRST: Get San Antonio breaking news directly to your inbox He was extracted from the vehicle, but was pronounced dead at the scene. The highway was closed going westbound just before the U.S. 281 on ramp for several hours as police investigated the crash and cleaned up the scene. Fatal Accident Shut Down 1604 Wednesday Morning. Big rodeo event moves from Vegas to Texas due to coronavirus. Ken Ritter, Associated Press Updated 3:38 pm CDT, Wednesday, September 9, 2020 FILE - In this Dec. 10, 2016, file photo, Paul Eaves competes in the team roping event during the final night of the National Finals Rodeo, in Las Vegas. 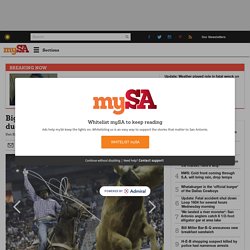 Officials announced Wednesday, Sept. 9, 2020, the National Finals Rodeo won't be held in Las Vegas this year due to coronavirus restrictions and will instead move to Arlington, Texas. lessFILE - In this Dec. 10, 2016, file photo, Paul Eaves competes in the team roping event during the final night of the National Finals Rodeo, in Las Vegas. Officials announced Wednesday, Sept. 9, 2020, the ... more Photo: John Locher, AP. Rodeo Event Moves From Vegas to Texas Due to COVID. Repair to well off Texas coast taking longer than expected. Updated 12:36 pm CDT, Wednesday, September 9, 2020 In this image released by the U.S. 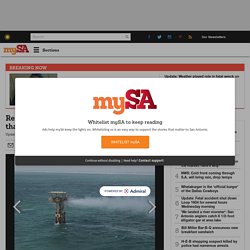 Coast Guard, natural gas is release from an oil platform approximately three miles offshore of Corpus Christi, Texas, Tuesday, Sept. 1, 2020. Officials responded Tuesday to a release from a well platform off the shore of Texas and the Coast Guard has a pollution response team on the beach to monitor the situation. There were no immediate reports of injuries. (U.S. In this image released by the U.S. In this image released by the U.S. Photo: AP Repair to well off Texas coast taking longer than expected CORPUS CHRISTI, Texas (AP) — Repairs to a natural gas well off the Texas coast that started leaking last week will take longer than expected, officials said. The well, located on a platform about 3 miles (5 kilometers) offshore from Padre Island’s Bob Hall Pier, was expected to have been repaired by early this week.

Repair to a Well Off Texas Coast.