11 Beautiful Friendships Between Classic Authors. Great writers tend to want to be at the top of their field, so literature can be a cutthroat community. 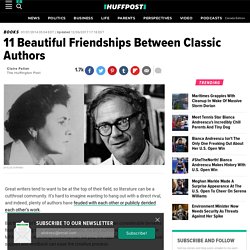 It’s hard to imagine wanting to hang out with a direct rival, and indeed, plenty of authors have feuded with each other or publicly derided each other’s work. But this doesn’t tell the whole story; writers can also glean considerable benefits from spending time around other writers. As any author who’s spent time in an MFA program or writing workshop can tell you, the opportunity to provide mutual support and feedback can ease the creative process. Even aside from these practicalities, writers often share experiences and interests others don’t -- and sharing something few others understand can truly draw people together.

'Every hour a glass of wine' – the female writers who drank. If you write a book about alcohol and male writers, as I did, the one question you'll be asked more than any other is: what about the women? 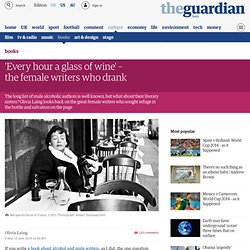 Are there any alcoholic female writers? And are their stories the same, or different? The answer to the first question is easy. Yes, of course there are, among them such brilliant, restless figures as Jean Rhys, Jean Stafford, Marguerite Duras, Patricia Highsmith, Elizabeth Bishop, Jane Bowles, Anne Sexton, Carson McCullers, Dorothy Parker and Shirley Jackson. Alcoholism is more prevalent in men than women (in 2013, the NHS calculated that 9% of men and 4% of women were alcohol-dependent). Welcome to Dinovember — Thoughts on creativity.

Every year, my wife and I devote the month of November to convincing our children that, while they sleep, their plastic dinosaur figures come to life. 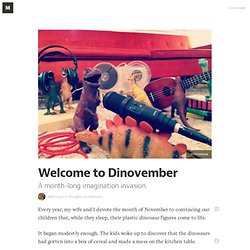 It began modestly enough. The kids woke up to discover that the dinosaurs had gotten into a box of cereal and made a mess on the kitchen table. The next morning, the dinos had climbed onto the kitchen counter to raid the fruit bowl. Such deep roots you have: How Little Red Riding Hood's tale evolved. Computer software that's traditionally used to trace evolutionary trees helped a scientist untangle the origins of one of the world's best-known stories — the tale of Little Red Riding Hood — but the end of this story turned out to be anything but traditional. 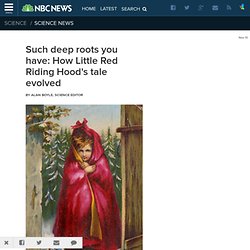 "We're turning current ideas on their head," Durham University anthropologist Jamshid Tehrani told NBC News. Most Westerners know the story by heart: Little Red Riding Hood sets out for Grandma's house with a basket of goodies, but a big bad wolf finds out about her itinerary, gobbles up Grandma and disguises itself to lure the little girl to her doom. "What big teeth you have! " Fairy tales have ancient origin. Your Beautiful Pictures Are Stupid: Against Trendy Digital Photography. "I hope the ghost of Walker Evans punches me in the face," wrote producer Eric Spiegelman last night. 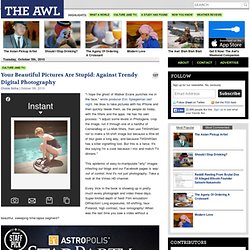 Neil Gaiman: Why our future depends on libraries, reading and daydreaming. It’s important for people to tell you what side they are on and why, and whether they might be biased. 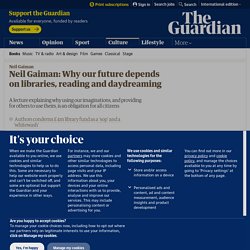 A declaration of members’ interests, of a sort. So, I am going to be talking to you about reading. Your Morning Happy Cry: 97-Year-Old Grandpa Creates Gorgeous Pixel Art. I was a Manic Pixie Dream Girl. Like scabies and syphilis, Manic Pixie Dream Girls were with us long before they were accurately named. 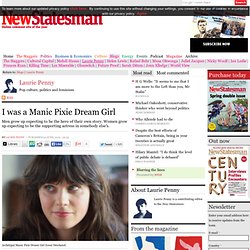 It was the critic Nathan Rabin who coined the term in a review of the film Elizabethtown, explaining that the character of the Manic Pixie Dream Girl "exists solely in the fevered imaginations of sensitive writer-directors to teach broodingly soulful young men to embrace life and its infinite mysteries and adventures". She pops up everywhere these days, in films and comics and novels and television, fascinating lonely geek dudes with her magical joie-de-vivre and boring the hell out of anybody who likes their women to exist in all four dimensions. Writing about Doctor Who this week got me thinking about sexism in storytelling, and how we rely on lazy character creation in life just as we do in fiction.

Men grow up expecting to be the hero of their own story. Women grow up expecting to be the supporting actress in somebody else's. Stories matter. 'This Misterie of Fucking': A Sex Manual From 1680. Tis gettyng hawte uppe inne heeyaugh! Pulling her hair, she can't hardly wait. This may be the best picture I've ever seen. Incredible Self Portraits by 14-Year-Old Photographer. British comics 1873-1939. If People Talked About Seinfeld Like They Talk About Girls. 19 Hardcore Images Of Bookshelf Porn. English literature's 50 key moments from Marlowe to JK Rowling. BBC Radio Three is currently broadcasting a fascinating series on the "50 key works" of classical music. 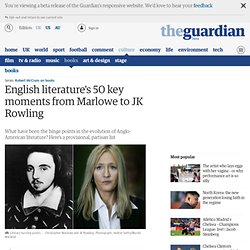 This is a spin-off from Howard Goodall's BBC2 television series and its tie-in book, The Story of Music (Chatto), and it crystallises – for the amateur listener – the turning points in the evolution of the classical tradition in the most enthralling way. Did you, for instance, know that Procul Harum's Whiter Shade of Pale contains a harmonic line that is pure Bach? So much for music. Following Radio 3, I've found myself speculating about the 50 key moments in the Anglo-American literary tradition. Arguably, Goodall's very good idea works almost as well for the history of the printed page. Who killed Christopher Marlowe? Darkness in literature: five great darknesses. Darkness is such a pliant and redolent theme, encompassing terror, comfort, wisdom, folly, being lost, being estranged, being sneaky, being smart; it is a representation of the seething, absent force of all that is selfish and wicked and cloaked (Sauron and Mordor in the work of Tolkien) or a profound and inexpressible and enigmatic presence (G K Chesteron's Sunday in The Man Who Was Thursday). 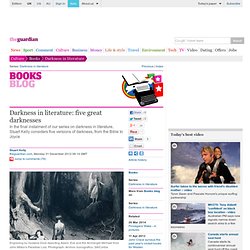 I've selected five versions of darkness from the capital "C" canon. It is neither exhaustive, nor definitive, but at least shows, I hope, how marbled and ambiguous darkness is. 1. The Bible It was probably through Persian Zoroastrianism that the equation of Light and God was first made. 8 Worthy Successors to Alison Bechdel. No Sugar Plums Here: The Dark, Romantic Roots Of 'The Nutcracker' Gossip from the Forest by Sara Maitland – review.

Why 2012 was the year of the fairytale. It is said that every era finds a mirror of its politics in the culture it generates. 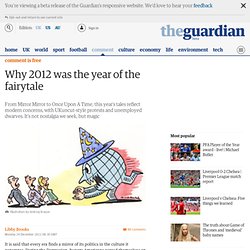 Marilyn’s Library. Marilyn Monroe’s Personal Library Photo by John Florea (Sources: The Personal Property of Marilyn Monroe, Christie’s, 1999; The Unabridged Marilyn; others cited) Fuck You, Gchat. Promiscuous Reading: Why Theodor Adorno Kept My Attention. Over lunch about a month ago, a friend asked me if I had read any good books recently. 11 Book Sequels You Probably Didn’t Know Existed. 17 Famous Literary Characters Almost Named Something Else. 7 (More) Children's Books by Famous "Adult" Literature Authors. By Maria Popova. Creepy Taxidermy by Enrique Gomez de Molina. Interview with Maurice Sendak. Reflecting on Frida Kahlo’s Birthday and The Importance of Recognizing Ourselves for (in) Each Other.

"The Trouble With Frida Kahlo" by Stephanie Mencimer. The Rumpus Interview With Hans Weyandt.