Bullying - Opposing Viewpoints in Context. School bullying has likely existed as long as schools themselves. 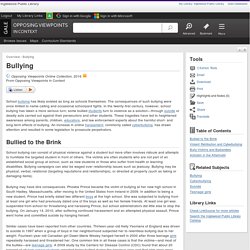 The consequences of such bullying were once limited to name-calling and occasional schoolyard fights. In the twenty-first century, however, school bullying has taken a more serious turn; some bullied students turn to violence as a solution—through suicide or deadly acts carried out against their persecutors and other students. These tragedies have led to heightened awareness among parents, children, educators, and law enforcement experts about the harmful short- and long-term effects of bullying. An increase in online harassment, commonly called cyberbullying, has drawn attention and resulted in some legislation to prosecute perpetrators. Bullied to the Brink. Cyberbullying – Where Did It All Start? You would be hard pressed to find a parent who doesn’t worry about cyberbullying, and rightly so. 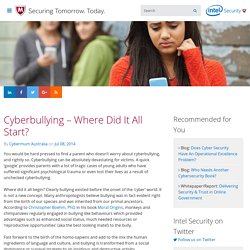 Cyberbullying can be absolutely devastating for victims. A quick ‘google’ provides parents with a list of tragic cases of young adults who have suffered significant psychological trauma or even lost their lives as a result of unchecked cyberbullying. Where did it all begin? Clearly bullying existed before the onset of the ‘cyber’ world. It is not a new concept. Fast forward to the birth of the homo-sapiens and add to the mix the human ingredients of language and culture, and bullying is transformed from a social dominance or survival strategy to an insidious and destructive activity.

Sherrow also believes that cultural practices and norms play a huge role. In our modern day society where violent video games and TV shows are tolerated, celebrities worshipped and sexualised content ‘managed’, a cultural norm is created. Till Next Time, Volunteer for Social Change. Welcome to DoSomething.org, a global movement of millions of young people making positive change, online and off! 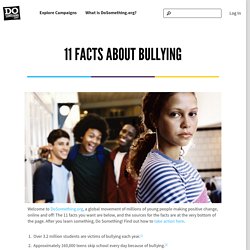 The 11 facts you want are below, and the sources for the facts are at the very bottom of the page. After you learn something, Do Something! Bullying Statistics - Youth "Ambassadors 4 Kids" Club (A4K) Bullying is a form of child abuse and 4 out of 10 children will drop out of high school this year because they are being bullied at school or abused at home. 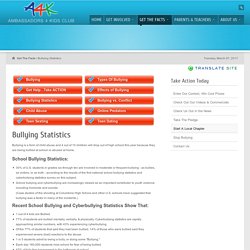 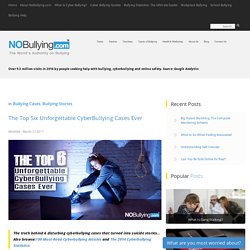 Wikipedia defines cyberbullying as, “Cyberbullying is the use of information technology to repeatedly harm or harass other people in a deliberate manner. According to U.S. Legal Definitions, Cyberbullying could be limited to posting rumors or gossips about a person on the internet bringing about hatred in others’ minds; or it may go to the extent of personally identifying victims and publishing materials severely defaming and humiliating them.”

There are 10s of cyberbullying stories where the bullies go to these extremes, cyberbullying victims are left to deal with the consequences. The National Youth Violence Prevention Resource Center estimates that nearly 30 percent of American youth are either a bully or a target of bullying. Cyber Bullying Stories: The Ryan Halligan Case (1989 – 2003) Update. Real Life Stories. Megan Meier Foundation. She loved swimming, boating, fishing, dogs, rap music and boys. 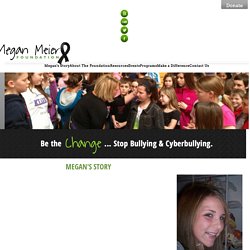 But her life had not always been easy, her mother says. She was heavy and for years had tried to lose weight. She had attention deficit disorder and battled depression. Back in third grade she had talked about suicide, Tina says, and ever since had seen a therapist. But things were going exceptionally well. She had just started eighth grade at a new school, Immaculate Conception, in Dardenne Prairie, where she was on the volleyball team. Amid all these positives, Tina says, her daughter decided to end a friendship with a girlfriend who lived down the street from them. Part of the reason for Megan's rosy outlook was Josh, Tina says. "Megan had a lifelong struggle with weight and self-esteem," Tina says.

It did seem odd, Tina says, that Josh never asked for Megan's phone number. Greeley mom says cyberbullies nearly drove daughter to suicide. <div>Please enable Javascript to watch this video</div> GREELEY, Colo. -- A mother said her daughter is now in a psychiatric ward after cyberbullies relentlessly attacked and eventually pushed her to the brink of suicide. 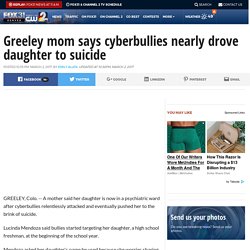 Lucinda Mendoza said bullies started targeting her daughter, a high school freshman, at the beginning of the school year. Mendoza asked her daughter's name be used because she worries sharing her story will only make the bullying worse. Mendoza switched her 15-year-old daughter from Greeley West High School to Greeley Central High School in hopes of ending the bullying. However, Mendoza said that's when the bullies started attacking her online. "On Wednesday morning, my daughter messaged me and was like, 'I can't focus mom.