Here Comes Bitcoin's Big Test: The Empire Strikes Back. Authored by John Rubino via DollarCollapse.com, One of the flaws in the revolutionary mindset is a tendency towards overconfidence. 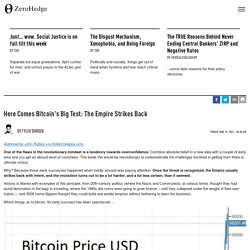 Combine absolute belief in a new idea with a couple of early wins and you get an absurd level of cockiness. This leads the would-be revolutionary to underestimate the challenges involved in getting from there to ultimate victory. Why? Because those early successes happened when hardly anyone was paying attention. History is littered with examples of this principle, from 20th-century politics (where the Nazis and Communists, at various times, thought they had world domination in the bag) to investing, where the 1990s dot-coms were going to grow forever – until they collapsed under the weight of their own hubris — and 2006 home flippers thought they could build real estate empires without bothering to learn the business.

Which brings us to bitcoin. This is an appealing prospect. In February, US Treasury Secretary Janet Yellen chimed in: Getting Ready For Gold's Golden Era. Authored by Matthew Piepenburg via GoldSwitzerland.com, Worried about gold sentiment? 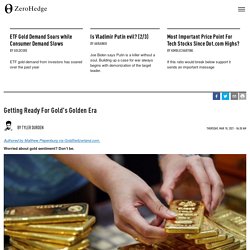 Don’t be. The mainstream view of gold right now is an open yawn, and sentiment indicators for this precious metal are now at 3-year lows despite the gold highs of last August. Is this cause for genuine concern? Not at all. In fact, quite the opposite. Most investors are totally wrong about gold, and below we show rather than argue why they are missing the forest for the trees. Unlike trend chasers, speculating gamblers and gold bears, sophisticated precious metal professionals and historically (as well as mathematically) conscious investors are not only calm right now, they are biding their time for what is about to become gold’s perfect backdrop and, pardon the pun, golden era. Understanding the Current Gold Price “Rising Rates” Looking, for example, at rates measured by the yield on the U.S. 10-Year Treasury, they have climbed dramatically from the .4% range to well above the 1.5% range in just under a year.

Tesla and SpaceX boss Elon Musk has doubled down on his dire warnings about the danger of artificial intelligence. 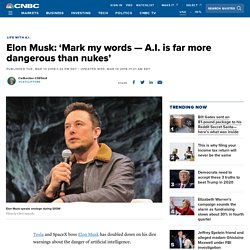 The billionaire tech entrepreneur called AI more dangerous than nuclear warheads and said there needs to be a regulatory body overseeing the development of super intelligence, speaking at the South by Southwest tech conference in Austin, Texas on Sunday. It is not the first time Musk has made frightening predictions about the potential of artificial intelligence — he has, for example, called AI vastly more dangerous than North Korea — and he has previously called for regulatory oversight. What Anesthesia Reveals To Us About Human Consciousness: Does It Have Long-Lasting Irreversible Effects? The Facts:Anesthesia is commonly used to put people to "sleep. 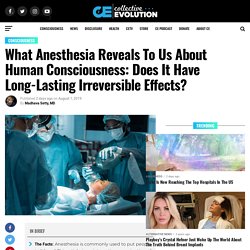 " This article is an interesting examination of why we do it, going deep into awareness, consciousness and fear.Reflect On:Can awareness continually exists without interruption regardless of the fact that we are not always able to access our experiences, or remember them when given Anesthetic? What is awareness? Can we really be 'awake' when we are acting out of fear? When patients ask anesthesiologists what we charge for putting them to sleep, we often say we do it for free.

We only bill them for the waking up part. This isn’t just a way of deflecting a question, it also serves as a gentle reminder to both parties regarding the importance of “coming to.” How does Anesthesia work ? From an Anesthesiologist’s point of view, we really shouldn’t charge for putting someone to sleep. In addition, those in my field have to contend with the reality that we really don’t know what we are doing. Take ether, for example. Science As We Know It Can’t Explain Consciousness – But A Revolution Is Coming.

Mercury begins its latest retrograde process on October 31st, which will last until November 20th/21st. 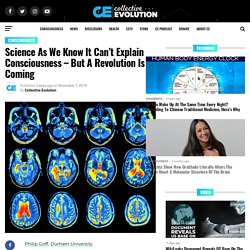 In the weeks (and especially days) leading up to it we start to notice its influence as Mercury slows down and comes to a stop before moving the other way. This is known as the ‘pre-shadow’ period which began on October 11th. This entire retrograde is occurring during a Lunar cycle that began on October 27th/28th at the New Moon in the same sign. You can read that article here for further insights on this period. If you have read my previous Mercury retrograde articles, the first two sections of this article are nearly the same and you can skip to the third section if you don’t want to re-read all the general themes associated with these periods.

Mercury retrograde is known for the problematic effects it often has on communication technology, transactions, motor vehicles, anything with moving parts, and commuting in general. The Deeper Purpose of Mercury Retrograde.