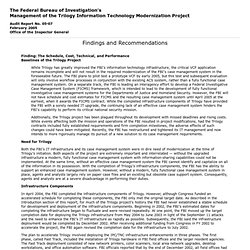 The FBI plans to pilot test a prototype VCF by early 2005, but this test and subsequent evaluation will only involve workflow processes in conjunction with the existing ACS system, rather than a fully functional case management system. On a separate track, the FBI is leading an interagency effort to develop a Federal Investigative Case Management System (FICMS) framework, which is intended to lead to the development of fully functional investigative case management systems for the Departments of Justice and Homeland Security. Additionally, the Trilogy project has been plagued throughout its development with missed deadlines and rising costs. Need for Trilogy. IS677 Group 6. Virtual Case File. Virtual Case File (or VCF) was a software application developed by the United States Federal Bureau of Investigation (FBI) between 2000 and 2005. 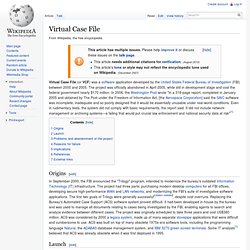 The project was officially abandoned in April 2005, while still in development stage and cost the federal government nearly $170 million. In 2006, the Washington Post wrote "In a 318-page report, completed in January 2005 and obtained by The Post under the Freedom of Information Act, [the Aerospace Corporation] said the SAIC software was incomplete, inadequate and so poorly designed that it would be essentially unusable under real-world conditions. Even in rudimentary tests, the system did not comply with basic requirements, the report said. It did not include network-management or archiving systems—a failing that would put crucial law enforcement and national security data at risk"[1] Origins[edit] Launch[edit]

Who Killed the Virtual Case File? In the early 1990s, Russian mobsters partnered with Italian Mafia families in Newark, N.J., to skim millions of dollars in federal and New Jersey state gasoline and diesel taxes. 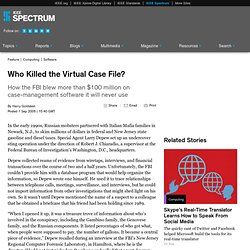 Special Agent Larry Depew set up an undercover sting operation under the direction of Robert J. Chiaradio, a supervisor at the Federal Bureau of Investigation's Washington, D.C., headquarters. Depew collected reams of evidence from wiretaps, interviews, and financial transactions over the course of two and a half years. Unfortunately, the FBI couldn't provide him with a database program that would help organize the information, so Depew wrote one himself. He used it to trace relationships between telephone calls, meetings, surveillance, and interviews, but he could not import information from other investigations that might shed light on his own.

Depew's appointment to the FBI's VCF team was an auspicious start to what would become the most highly publicized software failure in history. CIO interview: The Met's Richard Thwaite on its Total Technology IT strategy. Met Police technology use slammed as 'outdated' and 'inefficient' by London Assembly report. Crime in London is higher than it should be due to shoddy and out-of-date technology that is being used by the Metropolitan Police Service (MPS). 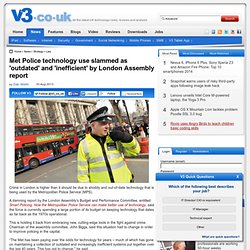 A damning report by the London Assembly’s Budget and Performance Committee, entitled Smart Policing: How the Metropolitan Police Service can make better use of technology, said the force is currently spending a large portion of its budget on keeping technology that dates as far back as the 1970s operational. This is holding it back from embracing new, cutting-edge tools in the fight against crime. Chairman of the assembly committee, John Biggs, said this situation had to change in order to improve policing in the capital. “The Met has been paying over the odds for technology for years – much of which has gone on maintaining a collection of outdated and increasingly inefficient systems put together over the last 40 years. This has got to change," he said. The report added that cloud computing use could also help cut costs and improve services. Met Police CIO reveals digital strategy. 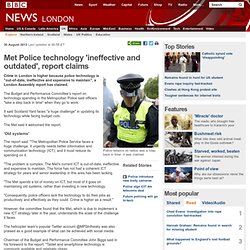 The Budget and Performance Committee's report on technology spending in the Metropolitan Police said officers "take a step back in time" when they go to work. It said Scotland Yard faces "a huge challenge" in updating its technology while facing budget cuts. Total Technology Strategy 2014 2017. FBI, CIA remain worlds apart. 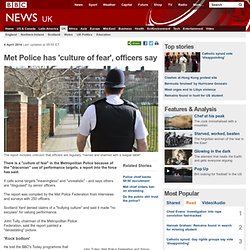 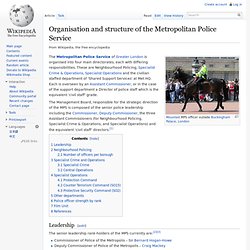