New Zealand: Maori pop song with serious message knocks Justin Timberlake off No 1. A New Zealand pop tune sung entirely in the indigenous language of Te reo Maori has shot straight to the top of the iTunes chart, knocking Justin Timberlake from the No 1 position. 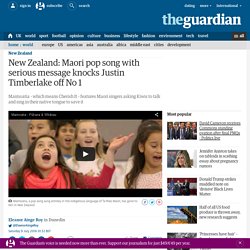 Maimoatia – which means Cherish It – features over a dozen little-known Maori singers belting out a gospel-esque tune, entreating Kiwis to adopt their native tongue and talk and sing in Te reo Maori to save it. According to Statistics New Zealand, only 4% of New Zealanders speak fluent Te reo Maori (about 48,000), and the number of active speakers continues to decline year on year. “A lot of young Maori don’t speak the language because they are shy and fearful of making mistakes with it,” said Nathaniel Howe, who performs in the song. “We wanted to empower young New Zealanders to own the language, to feel that it’s our responsibility to keep it alive.” Maimoatia was released on Wednesday and by Thursday it had bumped Justin Timberlake’s Can’t Stop the Feeling to second place on the New Zealand iTunes chart. Teachers 'unconscious bias' making Maori students fail. 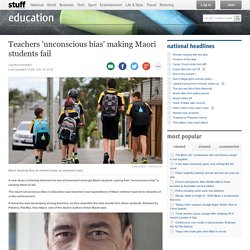 A new study is blaming teachers for low achievement amongst Maori students, saying their "unconscious bias" is causing Maori to fail. The report Unconscious Bias in Education said teachers' low expectations of Maori children had led to decades of under-achievement. A hierarchy was developing among teachers, so they expected the best results from Asian students, followed by Pakeha, Pasifika, then Maori, one of the study's authors Anton Blank said. "From the teacher's side, I think a lot of it is unconscious, it's not deliberate racism.

READ MORE: * PE teachers biased against fat kids, study finds * Gender and race discrimination hurting New Zealand financially: Lawyer Mai Chen Under-achievement could not just be blamed on the home environment kids were coming from. "It's not fair to put Maori failure on to parents. New Zealand beach bought by crowdfunding is given to public.

Image copyright realestate.co.nz A pristine beach in New Zealand bought through a crowdfunding campaign has been handed to its new owners - the public. 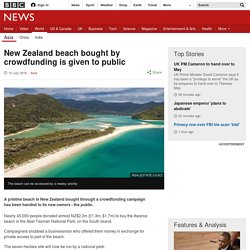 Nearly 40,000 people donated almost NZ$2.3m (£1.3m, $1.7m) to buy the Awaroa beach in the Abel Tasman National Park, on the South Island. Campaigners snubbed a businessman who offered them money in exchange for private access to part of the beach. The seven-hectare site will now be run by a national park. 'Please don't change' - US travel blogger's glowing tribute to the kindness of Kiwis - Travel. In an open letter to the people of New Zealand, an American travel blogger has taken it upon himself to express his sincere gratitude for an attitude he describes as helping him see the world with "new eyes". 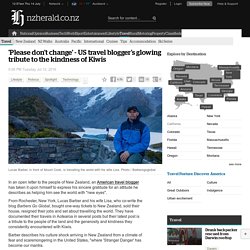 From Rochester, New York, Lucas Barber and his wife Lisa, who co-write the blog Barbers Go Global, bought one-way tickets to New Zealand, sold their house, resigned their jobs and set about travelling the world. They have documented their travels in Aotearoa in several posts but their latest post is a tribute to the people of the land and the generosity and kindness they consistently encountered with Kiwis. Barber describes his culture shock arriving in New Zealand from a climate of fear and scaremongering in the United States, "where 'Stranger Danger' has become our mantra.

"Everyone and everything has become a threat, and our ability to experience meaningful human interaction has become nearly impossible. Continued below. Bearcam offers a view of wild Alaska. Art - NZ - Maori - Contemporary sur Pinterest  The Maori today - New Zealand in History. New Zealand gangs: The Mongrel Mob and other urban outlaws. New Zealand, a country that routinely tops international lifestyle indexes, may not be the first place you would associate with gang culture - but violent gangs have deep roots in society. 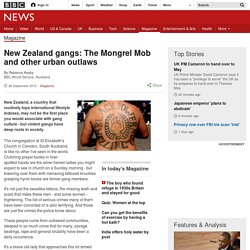 The congregation at St Elizabeth's Church in Clendon, South Auckland, is like no other I've seen in the world. Clutching prayer books in liver-spotted hands are the silver-haired ladies you might expect to see in church on a Sunday morning - but towering over them with menacing tattooed knuckles grasping hymn books are former gang members. It's not just the swastika tattoos, the missing teeth and scars that make these men - and some women - frightening.

The list of serious crimes many of them have been convicted of is also terrifying. And those are just the crimes the police know about. These people come from outlawed communities, steeped in so much crime that for many, savage beatings, rape and general brutality have been a daily occurrence. Wherever there are gangs, there is also gang rivalry.

Dark side of a warrior culture. As the excitement of the Rugby World Cup builds and New Zealand fills with visitors, the Independent's Sydney-based correspondent Kathy Marks files this story to the UK. 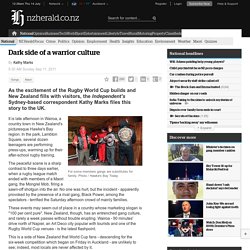 It is late afternoon in Wairoa, a country town in New Zealand's picturesque Hawke's Bay region. In the park, Lambton Square, several dozen teenagers are performing press-ups, warming up for their after-school rugby training. The peaceful scene is a sharp contrast to three days earlier, when a rugby league match ended with members of a Maori gang, the Mongrel Mob, firing a sawn-off shotgun into the air. No one was hurt, but the incident - apparently provoked by the presence of a rival gang, Black Power, among the spectators - terrified the Saturday afternoon crowd of mainly families. These events may seem out of place in a country whose marketing slogan is "100 per cent pure". But it reflects the uglier aspects of a nation widely perceived as clean, green and safe. Continued below. Manhunt under way in Kapiti and Porirua. New Zealand Maori Culture – Rich and Diverse.