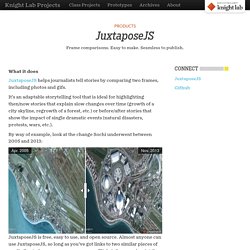 It’s an adaptable storytelling tool that is ideal for highlighting then/now stories that explain slow changes over time (growth of a city skyline, regrowth of a forest, etc.) or before/after stories that show the impact of single dramatic events (natural disasters, protests, wars, etc.). By way of example, look at the change Sochi underwent between 2005 and 2013: JuxtaposeJS is free, easy to use, and open source. Almost anyone can use JuxtaposeJS, so long as you’ve got links to two similar pieces of media (hosted on your own server or on Flickr). You’ve probably seen similar photo slider tools elsewhere. It also offers some customization out of the box. JuxtaposeJS joins four other tools in Publishers’ Toolbox, which we hope makes the suite of tools even more useful for journalists looking for quick-to-deploy, easy-to-use storytelling tools. Kartograph.org. Leaflet. 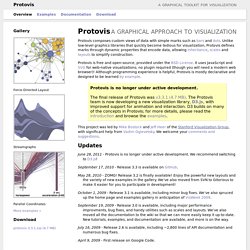 Unlike low-level graphics libraries that quickly become tedious for visualization, Protovis defines marks through dynamic properties that encode data, allowing inheritance, scales and layouts to simplify construction. Protovis is free and open-source, provided under the BSD License. It uses JavaScript and SVG for web-native visualizations; no plugin required (though you will need a modern web browser)! Although programming experience is helpful, Protovis is mostly declarative and designed to be learned by example. Protovis is no longer under active development.The final release of Protovis was v3.3.1 (4.7 MB). This project was led by Mike Bostock and Jeff Heer of the Stanford Visualization Group, with significant help from Vadim Ogievetsky.

Text 2 Mind Map. Tiki-Toki. Timemap. Timemap.js is a Javascript library to help use online maps, including Google, OpenLayers, and Bing, with a SIMILE timeline. 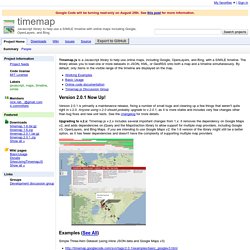 The library allows you to load one or more datasets in JSON, KML, or GeoRSS onto both a map and a timeline simultaneously. By default, only items in the visible range of the timeline are displayed on the map. Version 2.0.1 Now Up! Version 2.0.1 is primarily a maintenance release, fixing a number of small bugs and cleaning up a few things that weren't quite right in v.2.0.

Anyone using v.2.0 should probably upgrade to v.2.0.1, as it is more stable and includes very few changes other than bug fixes and new unit tests. Upgrading to v.2.x: Timemap.js v.2.x includes several important changes from 1.x: it removes the dependency on Google Maps v2, and adds dependencies on jQuery and the Mapstraction library to allow support for multiple map providers, including Google v3, OpenLayers, and Bing Maps. Simple Three-Item Dataset (using inline JSON data and Google Maps v3) TimeMapper. TimeRime. Timesheet-js. Visualize your data and events with sexy HTML5 and CSS3. 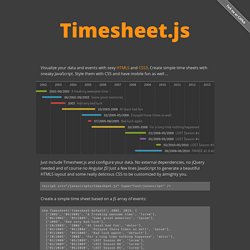