NYCPlugged – Your Plug For Exclusive NYC Events and Lifestyle. Six Brooklyn drink and draw classes for art- and or alco- holics. Drinking is no doubt a great vice to have in moderation. 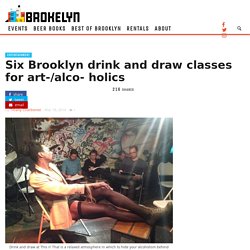 Drinking and drawing is an even sweeter combination in a borough full of such artistic ambition. The proliferation of drink n’ draw in Brooklyn brings to mind when Picasso found friends in Henri Matisse, Joan Miró and George Braque and would meet with them to exchange ideas in his and their craft. I picture them in Paris, the capital of the arts, drinking…and drawing together every week. Art Classes New York. How to meet new people in NYC from cooking classes to meet-ups. The 15 Best Places for Fish Tacos in New York City. New York City Real Estate. 10 Tips on How to Find Your First New York Apartment - East Village. MANHATTAN — Gabrielle Hurwitz, a recent graduate of Chicago’s Northwestern University, opted to pay a little more for her first New York City apartment — and climb six flights of stairs — in exchange for a lively neighborhood. 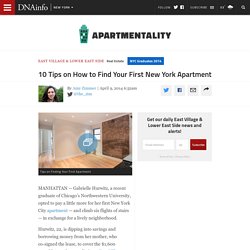 Hurwitz, 22, is dipping into savings and borrowing money from her mother, who co-signed the lease, to cover the $1,600 monthly rent for a studio in an East Village walk-up. Compass - Find A Home You Love. Manhattan & NYC Apartment Rentals & Real Estate For Sale. NYC Real Estate & Apartments For Sale in New York City - StreetEasy. The 8 best websites for finding a no-fee apt in New York City.

Whether you're new to New York or just haven't looked for an apartment for awhile, one of the rudest shocks is the broker fee, typically 12 to 15% of a year's rent. 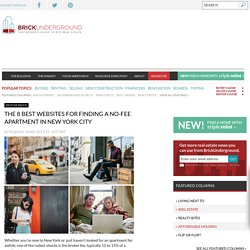 Handing over several thousand dollars or more to a broker can make sense if it's your first time at the rodeo and you need help navigating the rental market (read this first), you don't have time to DIY, can't find what you want on your own , and/or you're planning to stay put for a couple of years or longer. But if you've got the time and perseverance to do the legwork yourself, there are plenty of options. To get started, here's BrickUnderground's annual update (originally posted on 5/27/15) of the best free places to kick off your no-fee apartment search online. The websites listed below get their no-fee listings directly from landlords, management companies, brokers whose fee is being paid by the landlord, and sometimes even renters themselves.

Honorable mentions: And the ace in your back pocket... Related: Moving to NYC? Moving to NYC? Here's a crash course in finding an apartment here. [This story has been updated with new information for 2015.] 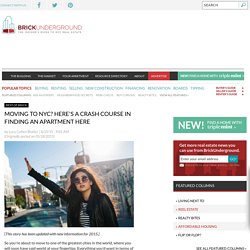 So you're about to move to one of the greatest cities in the world, where you will soon have said world at your fingertips. Everything you'd want in terms of culture, dining, shopping, education, and $12 juices is right here. Plus, you'll never have to own a car again. But with all of the perks of living in New York City come some downsides, such as the generally high cost of living, and our insanely expensive, competitive real estate market. Whether you're looking to rent or buy, here's how to think like a New Yorker in 2015, and hit the ground running: 1.

Every one of the boroughs — there are five, by the way — has more and less desirable neighborhoods. Oftentimes, being on the fringe of some of the city's most popular neighborhoods translates into better deals for both buyers and renters. Keep in mind that brokers (or landlords) may sometimes fudge a neighborhood to make an apartment seem more desirable. 2. 3. HYPNOTIC BRASS ENSEMBLE-NyC Subway 14th Street Union Square. 1884 - La Statue de la Liberté et la rue de Chazelles - Paris Unplugged. 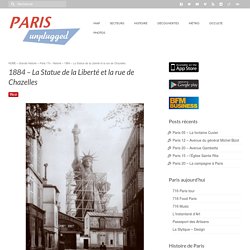 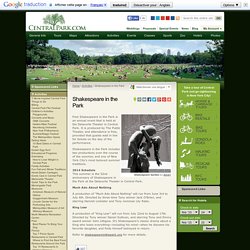 It is produced by The Public Theater, and attendance is free, provided that guests wait in line for tickets on the day of the performance. Shakespeare in the Park includes two productions over the course of the summer, and one of New York City's most beloved summer traditions. 2014 ScheduleThis summer is the 52nd anniversary of Shakespeare in the Park at the Delacorte Theater in Central Park. Much Ado About Nothing A production of “Much Ado About Nothing” will run from June 3rd to July 6th. King Lear A production of “King Lear” will run from July 22nd to August 17th. Refer to shakespeareinthepark.org for more details. The Onion - America's Finest News Source.

Williamsburg Waterfront is a Brooklyn music venue again? (no) Greenpoint Brooklyn's Best Neighborhood Blog. Newyorkshitty.com. NY Light On / Franck Bohbot. 31 Photos Of New York City In The Summer Of '69. This Is What Dr. Zizmor Looks Like In 2014: Gothamist. Audible gasps could be heard echoing throughout Gothamist HQ this morning after recent photos of Dr. 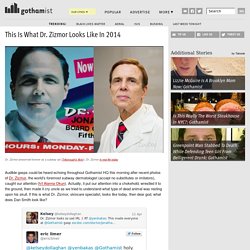 Zizmor, the world's foremost subway dermatologist (accept no substitutes or imitators), caught our attention (h/t Alanna Okun). Actually, it put our attention into a chokehold, wrestled it to the ground, then made it cry uncle as we tried to understand what type of dead animal was resting upon his skull. If this is what Dr. Zizmor, skincare specialist, looks like today, then dear god, what does Dan Smith look like? "New York La La La": A fashion-infused skate-short by Aaron Rose and André Saraiva - NOWNESS. Tracking Brooklyn's Rapid-Fire Gentrification With Google Street View. Free Williamsburg - the Williamsburg Brooklyn based culture guide to New York. Who Is Dick Chicken? 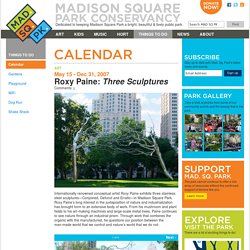 Roxy Paine’s long interest in the juxtaposition of nature and industrialization has brought form to an extensive body of work. From his mushroom and plant fields to his art-making machines and large-scale metal trees, Paine continues to see nature through an industrial prism. Through work that combines the organic with the manufactured, he questions our position between the man-made world that we control and nature’s world that we do not. The artist is engaged in an ongoing ambitious body of work: the creation of large stainless-steel tree sculptures, ranging in height from 12 to 55 feet. These complex works are fabricated from up to 7000 metal pipe and rod elements, in 30 different diameters, are assembled through the rigorous tasks of cutting, bending, tacking, welding, grinding and polishing.