Funny Motivational Video - TEAM = Together Everyone Achieves More. Ad deconstruction, Gatorade micheal forrsell. Creating critical thinkers through media literacy: Andrea Quijada at TEDxABQED. What is Media Literacy? Media Smarts: Kids Learn How to Navigate the Multimedia World. Narrator: The average American young person spends more than six and a half hours in front of some sort of screen each day. 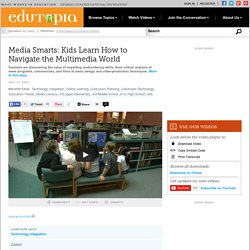 Surfing the web, watching TV, and playing games. Teacher: Okay, when you have a novel-- Narrator: Yet, most schools treat the written word as the only means of communication worthy of study, and as a consequence, students remain poorly equipped to think critically about, and express themselves through, the media they are immersed in every day. George: We stress so hard learning English, and learning English grammar, and then we shove music and art over into some sort of artistic, which means, sort of therapeutic or fun thing.

It's not approached as a very valid form of communication. Narrator: In a recent interview, filmmaker George Lucas spoke about the need to rethink the way we teach communication skills. Narrator: The teaching of those rules and other facets of media literacy, is gradually gaining traction in schools across the country. Teacher: But why? Sesame Street: Standing Up to a Bully. Art "Therapy" - A Documentary About Art as Therapy. According to Wikipedia, “therapy” literally means curing, or healing. 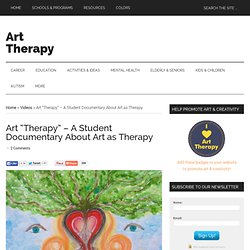 That is how art therapy is used in Art “Therapy”: A Documentary, which features five young people with some form of mental illness who have found ways of healing themselves through artistic expression. Here is the video along with a summary and transcript below. Michael suffers from and is under medication for Attention Deficit Hyperactive Disorder. ADHD is a condition in which impaired functions in the brain produces hyperactivity and makes it difficult for a person to remain calm and focus on a single activity.

He experiences a jumble of random images in his mind, and finds that if he jots these down in his sketchbook and paints them on canvas, they can be transformed into something profound. Haleigh has Attention Deficit Disorder (ADD). Brittany suffers from extreme loneliness and panic from a fear of desertion caused by frequent absences of her mother during infancy and early childhood. I’ve written a lot. Logical argument fallacies. Bullied Girl Voted the Ugliest on the Internet Gives an AMAZING Speech. The Most Beautiful Way To Stop A Bully I've Ever Seen. Amy Cuddy: Your body language shapes who you are. Rethinking Work-Life Balance. 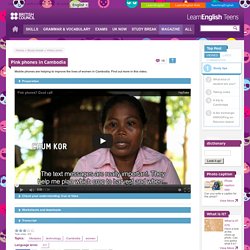 Unexpected storms often destroyed their crops and when they did have crops to sell they didn’t know how much to sell them for. Oxfam is giving mobile phones to women in remote villages in Cambodia and sending them text messages about the latest weather information and crop prices. The women are then able to share this information with others, talk to traders and barter for better profits by making a simple phone call.Chum Kor: The text messages are really important. They help me plan which crop to harvest and when - which increases my overall productivity. My community has been transformed. Funny Hugh Laurie & Stephen Fry comedy sketch! 'Your name, sir?' - BBC. 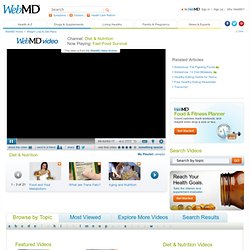 Despite our best intentions, most of us eat fast food. Unfortunately, research has shown the more fast food we eat, the more calories we take in, and the more likely we are to be overweight. But don't despair. As consumers become savvier about their dietary needs... Yeah, I'd like to get a salad, please. the fast-food giants are responding to the growing market. The grilled chicken sandwich is a great option... WebMD's registered dietician, Kathleen Zelman, recently got the skinny on some of the leaner options being offered by Chick-Fil-A. Kathleen Zelman, MPH, RD: So tell us what makes this sandwich healthier than some other options. Jodie Worrell, RD: One thing, we have a whole wheat bun. Although lower calorie, lower fat options like the grilled chicken sandwich haven't quite caught up to their deep fried counterparts, they are gaining.

The dietary trend is making it easier for health conscious customers to stay on the straight-and-narrow. Bill Meason: The new world of work.