My Virginity is Not A Challenge. Happy MONDAY Joonies, I keep it #FRESH as Hell, thanks to DIPLO: Ironically, I’m extremely uncomfortable getting detailed/personal– but its not fair that Farrah spills all the personal shit, and Saaghi gets away with sarcasm & embarassing stories. 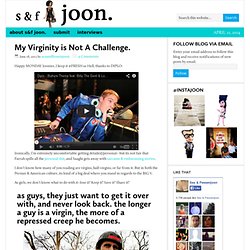 I don’t know how many of you reading are virgins, half-virgins, or far from it. But in both the Persian & American culture, its kind of a big deal where you stand in regards to the BIG V. As girls, we don’t know what to do with it–lose it? Keep it? As guys, they just want to get it over with, and never look back. Asexuality Archive. Please note: All surveys are currently disabled while the responses are being analyzed.

Thank you for your interest! Welcome to my multi-part asexuality questionnaire. My aim is to dive into the thoughts and experiences of asexual and ace spectrum people.

Reading. Relationship. Asexual Visibility and Education Network. Acebook. Apositive. Asexuality Archive. Asexuality: Asexual heroes. Understanding Asexuality from the Outside. A friend who rarely mentions sex has not had any in at least a decade.

It has always seemed odd to me, but he is someone I really care for, and I accept him as he is. When I discovered the AVEN board, I put two and two together and got asexuality. I did not want to confront my friend over something he might not be comfortable talking about, but I did want to let him know that I was asexual-friendly. Unable to concoct a better plan, I sent a FYI e-mail to a dozen friends, letting them know that I was reading very interesting threads on the AVEN board. I even sent links to some of my favorites. He wrote back a few days later, saying he had looked over the board and found it fascinating. O.K., he is not asexual. Two days later I received e-mail from a different friend, one of the eleven. I was floored. I am really embarrassed to admit this, but my stereotyping goes further.

Ace up your sleeve - Ace mini-tutorial. Why It Is Healthy To Be Asexual. An Asexual Map for Sex-Positive Feminism. During a recent discussion of asexuality in the comments on Clarisse Thorn’s sex-positive 101 post, a reader named Kaz got in touch.

Kaz is German and studying mathematics in the UK. Ze is a feminist activist and eir particular interests are related to asexuality and disability rights. You can find zer on Dreamwidth. (Please note that a commenter named Norah also wrote a blog response to the comments at CT’s place.) As it currently stands, many asexual people often describe the sex-positive movement as unsafe for them. One strategy to help change this is to talk more about asexual people’s concerns, and more generally about things that affect low-sexual-desire people. That said, I imagine “talk more about asexuality and our issues!” So — if you’re interested, I’m giving you a little introduction to asexuality online — links to some of the blogs, explanation of some of the common issues and stuff we talk about. Asexual Blogs Writing from Factor X, by Sciatrix. Asexy Beast, by Ily. The Ethical Prude: Imagining An Authentic Sex-Negative Feminism.

“A slut is a person of any gender who has the courage to lead life according to the radical proposition that sex is nice and pleasure is good for you,” write Dossie Easton and Janet Hardy in The Ethical Slut: A guide to infinite sexual possibilities. 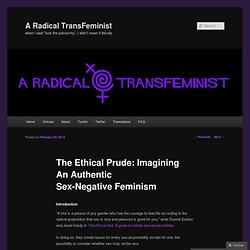 In doing so, they create space for every sexual possibility except for one: the possibility to consider whether sex may not be nice. Some might suggest this space exists, already populated by woman-haters, given the shame, hatred and violence on offer for women who dare to have sex on their own terms. But these moralistic right-wing views don’t hold that sex is not nice – they hold that women who have sex (and others who are seen to be treated as women in sex) are not nice. As such it is both progressive and radical to say that sex is not shameful for women, and that a woman should not be punished for her sexual choices; radical, because shaming and punishment are both commonplace.

This precludes certain ways of thinking about sex. Ibid., p178. Not social justice from where I’m standing. I’ve been having a bit of a think about how asexuality is addressed in a social justice context. 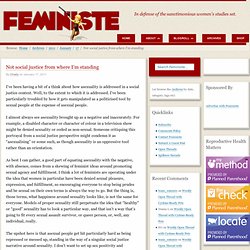 Well, to the extent to which it is addressed. I’ve been particularly troubled by how it gets manipulated as a politicised tool by sexual people at the expense of asexual people. I almost always see asexuality brought up as a negative and inaccurately. For example, a disabled character or character of colour in a television show might be denied sexuality or coded as non-sexual. Someone critiquing this portrayal from a social justice perspective might condemn it as “asexualising” or some such, as though asexuality is an oppressive tool rather than an orientation. As best I can gather, a good part of equating asexuality with the negative, with absence, comes from a skewing of feminist ideas around promoting sexual agency and fulfillment. But then, I don’t think asexual issues are seen as feminist issues (by sexual feminists, that is), where they’re acknowledged as existing.