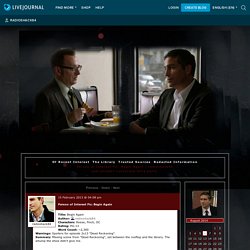 The whump the show didn’t give me. A/N: Jason Santori is an OC from my story "In Fear, Resolve". The muses felt like giving him an encore appearance. No need to read that story to get this one. “Guess Snow retired after all.” Before he knew he’d moved, he’d shoved his gun back into the waistband of his pants and was tearing off his jacket and shirt. His eyes snapped up to meet Finch’s and his vision swam. “Come sit down, Mr. John was about to ask where since they were on a rooftop, but apparently Finch was a step ahead with the logistics and led him to a brick frame about three feet high that enclosed one of the building's air-handling systems.

Untalked Of and Unseen - hedda62 - Person of Interest (TV) "You're going to be fine, Mr. 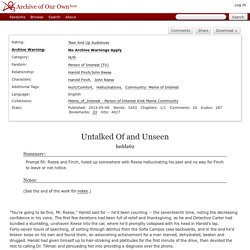 Reese," Harold said for -- he'd been counting -- the seventeenth time, noting the decreasing confidence in his voice. The first few iterations had been full of relief and thanksgiving, as he and Detective Carter had bundled a stumbling, unshaven Reese into the car, where he'd promptly collapsed with his head in Harold's lap. Forty-seven hours of searching, of sorting through detritus from the Sofia Campos case backwards, and in the end he'd broken loose on his own and found them, an astonishing achievement for a man starved, dehydrated, beaten and drugged.

Harold had given himself up to hair-stroking and platitudes for the first minute of the drive, then devoted the rest to calling Dr. Tillman and persuading her into providing a diagnosis over the phone. "Mr. "Bullet," said John. "What? " "Have to get the bullet out. " "It's not a gunshot wound" -- he unfortunately knew what those looked like too -- "it's… they used a knife on you. "Stop! " "Give what--" "Mr. 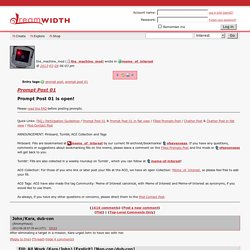 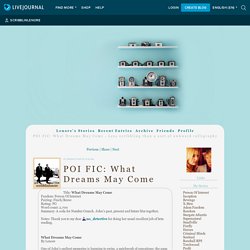 John's past, present and future blur together. Notes: Thank you to my dear no_detective for doing her usual excellent job of beta reading. What Dreams May ComeBy Lenore One of John's earliest memories is learning to swim, a patchwork of sensations: the aqua dazzle of the pool, warm arc of sun across his bare skin, bite of chlorine in his mouth, and his mother, the white-gold strands of her hair lifting in the breeze, her laughing mouth, her arms wide flung and encouraging. He's always loved the water, but he has no idea how he got here now, so deeply submerged that everything is cold and dark. The way back takes all his strength, up and up until he's exhausted. He squints, shading his eyes. On shore, it takes a moment to get his bearings, and then he can feel the wet sand between his toes, the heavy fall of sunlight on his shoulders. John smiles wolfishly. Person of Interest Fic: My Secret Friend - BlazeorFade. “Friends and Foes” for eviinsanemonkey - Person of Interest Fanfic Community.

Title: ”Friends and Foes” for. 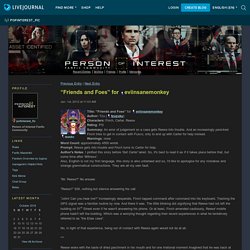 December 6th, 2013 - blacktop50. Not Everyone Dies Alone. Even with the Kevlar vest on, Reese could feel the bullets plowing into him. 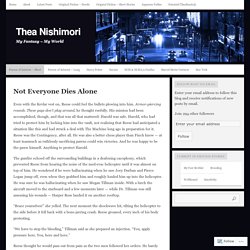 Armor-piercing rounds. These guys don’t play around, he thought ruefully. His mission had been accomplished, though, and that was all that mattered: Harold was safe. Harold, who had tried to protect him by locking him into the vault, not realizing that Reese had anticipated a situation like this and had struck a deal with The Machine long ago in preparation for it. Reese was the Contingency, after all. The gunfire echoed off the surrounding buildings in a deafening cacophony, which prevented Reese from hearing the noise of the med-evac helicopter until it was almost on top of him. “Brace yourselves!” “We have to stop the bleeding,” Tillman said as she prepared an injection. Reese thought he would pass out from pain as the two men followed her orders. “Hold on, John,” Pierce told him. Fanfic: Slowly Into the Endless Night [Reese, Finch, Carter & Fusco] - "Whatever you do will be insignificant ... Title: Slowly Into the Endless Night.Author: hotch_fanRating: PG-13Characters:Reese, Finch, Carter and FuscoDisclaimer: I don't owe Person of Interest or any of its characters.Spoilers: 2x10 "Shadow Box"Summary: Reese's, Finch's, Carter's and Fusco's POVs in some of the last scenes of the episode.Notes: Thanks to PJTL156 for the beta. 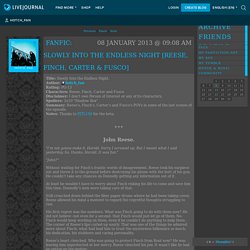 John Reese. "I'm not gonna make it, Harold. Sorry I screwed up. But I meant what I said yesterday.