You're My (Other) Best Friend, White Collar. This is just a little fic I made for the runthecon challenge at LiveJournal. 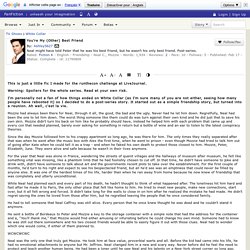 Warning: Spoilers for the whole series. Read at your own risk. I'm personally not a fan of how things ended on White Collar (as I'm sure many of you are not either, seeing how many people have rebooted it) so I decided to do a post-series story. It started out as a simple friendship story, but turned into a reunion. Ah well, c'est la vie. Mozzie had always been there for Neal, through it all, the good, the bad and the ugly. Since the day Mozzie followed him to his crappy apartment so long ago, he was there for him.

For the year that Neal was alone in France, wandering the streets of quaint villages and the hallways of museum after museum, he felt like something vital was missing, like a phantom limb that he had foolishly chosen to cut off. While Neal had planned each and every part of his death, he hadn't thought to think of what happened after. He had to tell someone that Neal Caffrey was still alive. White Collar - Thursday - Black Dragon. Title: ThursdayRating: PG-13 for bloodCharacters: Mozzie, NealSummary: Neal is hurt, Mozzie makes a choice. 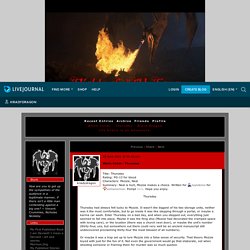 Written for laylabinx for collarcorner. Pompt here. Hope you enjoy. Thursday Thursday had always felt lucky to Mozzie. Or maybe it was a trap set up to lure Mozzie into a false sense of security. The long and short of it was that, for once, Mozzie didn't care about the why. Well, okay, Neal knew but only because Mozzie had needed help moving in. So it was quite startling, terrifying even, to hear a fist banging on the metal door. They didn't. A Conspiracy Of Comfort, White Collar. Title: A Conspiracy Of Comfort Author: HalfshellVenus Characters: Mozzie, Neal, Peter (Gen) Rating: K+ Summary (early Season 2): Neal has stolen millions of dollars of goods, but it's his friendships that make him rich. 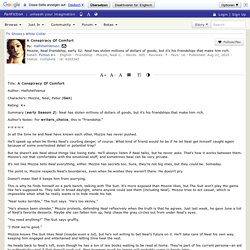 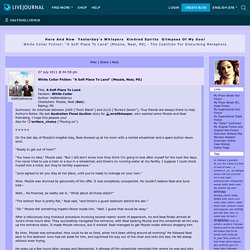 True friends are always there to help.Author's Notes: My last Australian Flood Auction story for wraithkeeper, who wanted some Mozzie and Neal friendship. I hope this pleases you! Also for writers_choice ("Moving on"). White Collar - "A Distinct Presence Of Blame" - @TeeJay. Title: A Distinct Presence Of BlameAuthor: TeeJaySummary: Memories resurface as Neal lays eyes on the scar on Mozzie's chest.Written for: anonymous for the collarcornerPrompt Fest #4Prompt/Request: Mozzie's ScarsWould Like: Neal sees the scar on Mozzie's chest left behind from Julian Larssen's bullet. 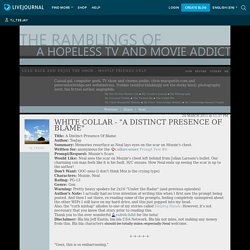 Our charming con man feels like it is his fault. H/C ensues. How Neal ends up seeing the scar is up to the author! White Collar Fic: The Devil's Workshop - RabidChild's World. Title: The Devil’s WorkshopRating: PG-13Characters/Pairings: Moz, Neal, Peter; gen, pre-seriesSpoilers: Forging BondsContent Notice: NoneWord Count: 4,500Summary: When Neal is hospitalized, Moz has to use all his wits to keep him under the radar. 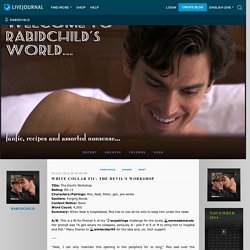 A/N: This is a fill for Prompt 6 of my wcpairings challenge for the lovely emmademarais. Her prompt was “N gen where he collapses, seriously ill - pick P or E or M to bring him to hospital and fret.” Many thanks to winterstar95 for the idea and, uh, tech support. “Neal, I can only maintain this opening in the periphery for so long,” Moz said over the communicator. He stood peering into the laptop he’d hardwired into the fiber optics of the Metropolitan Museum of Art, into which he’d dropped a little sub-routine that fooled the video surveillance into rerunning the same loop of video over and over for the last half hour.

A garbled bit of communication came over the line. “I said I hope Kate likes her Valentine’s Day gift. ”Yep.” Fic: Only Son, Part 1 - RabidChild's World. Title: Only SonRating: R for violenceCharacters/Pairings: Neal and Moz, (though P/E/N established relationship is in there)Warnings/Triggers: child abuseSpoilers: NoneWord Count: ~8800 for both partsSummary: The story of how Neal and Mozzie met, and why Neal never finished high school. 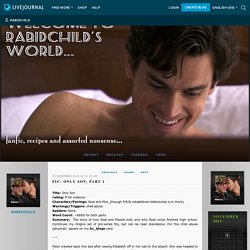 Continues my Origins set of pre-series fics, but can be read standalone. For the child abuse (physical) square on my hc_bingo card. Peter crawled back into bed after seeing Elizabeth off in her cab to the airport. She was headed to Boston for the day to meet with a potential client. Peter snuggled up against Neal, burying his nose in his neck and throwing a leg over both of his. “Cold nose!” “Barely.” Coping Strategies - IamShadow21 - White Collar. When Neal got home, he was half expecting Mozzie. 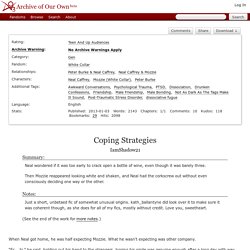 What he wasn't expecting was other company. “Er... hi,” he said, holding out his hand to the strangers, hoping his smile was genuine enough after a long day with way too much running for his taste. The man and woman, who had sprung to their feet when the door opened, didn't even bother to return it, just looked jumpy and suspicious. “This is Steve,” Mozzie added hastily. Neal nodded politely letting 'Steve' seep a little to the surface in his posture.

“You trust him?” “Yes.” The woman coldly scanned Neal head to foot. “We'll come back another day,” she concluded, heading for the door without any further hesitation. “I'll... er... show you out,” Mozzie offered, quickly trotting behind. Neal surveyed the empty room. His calves and thighs were beginning to stiffen up, and he was pretty sure that there was a fist sized bruise colouring up on his ribs.