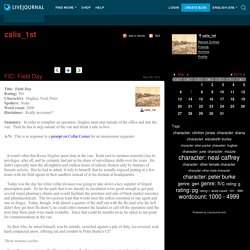 Summary: In order to complete an operation, Hughes must step outside of the office and into the van. Then he has to step outside of the van and break a rule or two. A/N: This is in response to a prompt on Collar Corner for an anonymous requester. It wasn't often that Reese Hughes spent time in the van. Rank (not to mention seniority) has its privileges, after all, and he certainly had put in his share of surveillance shifts over the years. Today was the day his white collar division was going to take down a key supplier of forged prescription pads. Only In Time, White Collar. Only In Time This is my first White Collar fic. 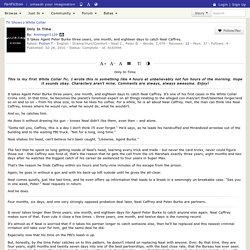 I wrote this in something like 4 hours at unbelievably not fun hours of the morning. Hope it sounds okay. Characters aren't mine. Comments are always, always awesome. Bonjour à Nouveau - VesperNexus - White Collar. Bonjour à Nouveau Hello Again Peter’s feet are pounding beneath him before he hears the residing thud of Keller’s body as it collided sickeningly against the filthy asphalt. 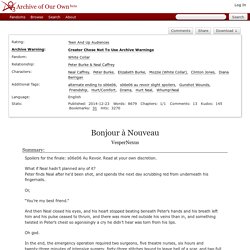 He ignored the lead-like feeling precariously weaving its way up his limbs and coiling about his joints, weighing his bones down to the point of exhaustion. He ignored the burning in his muscles as his legs stretched further and faster, feet forcefully pressing against the concrete in his panicked haze. His heart had already begun pounding far too rapidly against his ribcage, beating in a hurried succession which threatened to crack through the fragile-feeling prison of his ribs. Climbing down the steps with barely contained worry, he continued to ignore the close numbness of his legs and heaviness of his arms, as if he were supporting the weight of the world and having absolutely naught to do with the pistol loosely clutched in between his long fingers. A chance to say goodbye. No. 65347.

Allies, Part 1 - Lost: A Sense of Proportion. At last, another White Collar story! 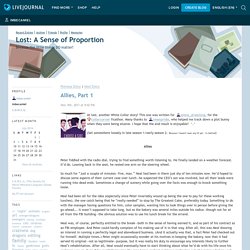 This one was written for alone_dreaming, for the collarcorner ficathon. Many thanks to swanpride, who helped me track down a plot bunny when they were being elusive. (Set somewhere loosely in late season 1/early season 2. Allies Peter fiddled with the radio dial, trying to find something worth listening to. So much for “Just a couple of minutes—five, max.”

Neal had been all for the idea (especially since Peter invariably wound up being the one to pay for these working lunches), the one catch being that he “really needed” to stop by The Greatest Cake, preferably today. Neal was, of course, perfectly entitled to the break—both in the sense of having earned it, and as part of his contract as an FBI employee. Seeing as the place was less than five minutes away by car, Peter had suggested a compromise: a quick stop at the bakery first, then lunch. He checked the clock again. White Collar - "Desperate Deed" (1/6) - @TeeJay. Title: Desperate DeedChapter: 1 of 6Author: TeeJayGenre: GenCharacters/Pairings: Neal, Peter, Elizabeth (and a number of other regulars)Written for: kanarek13 for collarcornerPrompt Fest Round 6Prompt/Request: I don't wanna give too much away, so I'm not gonna post the prompt here. 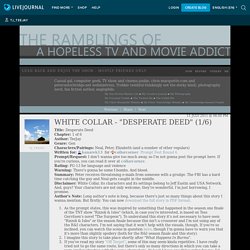 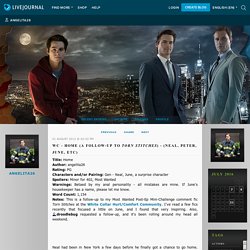 If June's housekeeper has a name, please let me know.Word Count: 1,154Notes: This is a follow-up to my Most Wanted Post-Ep Mini-Challenge comment fic Torn Stitches at the White Collar Hurt/Comfort Community. I've read a few fics recently that focused a little on June, and I found that very inspiring. WC - Water's Wider - Sometimes... Title: Water's WiderAuthor: angelita26Rating: PG-13Characters: Gen – Neal, PeterWarnings: If you're squeamish about blood, there's some description of injury. 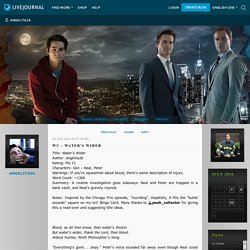 Word Count: ~1300Summary: A routine investigation goes sideways. Neal and Peter are trapped in a bank vault, and Neal's gravely injured. Notes: Inspired by the Chicago Fire episode, "Joyriding". Hopefully, it fills the "bullet wounds" square on my H/C Bingo Card. Many thanks to pooh_collector for giving this a read-over and suggesting title ideas. 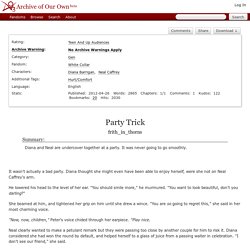 Diana thought she might even have been able to enjoy herself, were she not on Neal Caffrey's arm. He lowered his head to the level of her ear. "You should smile more," he murmured. "You want to look beautiful, don't you darling? " She beamed at him, and tightened her grip on him until she drew a wince. "Now, now, children," Peter's voice chided through her earpiece. Neal clearly wanted to make a petulant remark but they were passing too close by another couple for him to risk it. Neal was scanning — casing — the room without appearing to. "Well, he hasn't so far.

" "He's probably watching through the camera in the chandelier, waiting for the perfect moment. "Speaking from experience? " "You wound me," he said breezily, and paused to sweep a strand of hair from her face, with a grin that said he knew perfectly well she would make him pay later. There were a great deal of people in the large room. Wrong Time, Wrong Place - embroiderama - White Collar. Neal focused on the ceiling, on the hatch that led out of the elevator and into the shaft. 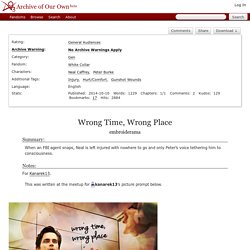 It would be dark up there, but at least he’d be away from the lights that were glowing so brightly above him. Even when he closed his eyes, he could see them burning red through his eyelids, and he tried to cover his eyes but but his arm was too heavy. He imagined that the floor was magnetized, his wristwatch and cufflinks tethering his limbs to the metal surface below, but he knew it wasn’t true. Probably. Probably wasn’t true, though as he blinked to bring the square hatch above him into focus he realized that he wasn’t sure what exactly was keeping him on the floor. [fic: white collar] See This Through - words of wood. Only a couple of days to go until new White Collar! 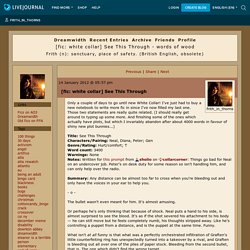 I've just had to buy a new notebook to write more fic in since I've now filled my last one. Those two statements are really quite related. (I should really get around to typing up some more. And finishing some of the ones which actually have plots, but which I invariably abandon after about 4000 words in favour of shiny new plot bunnies...) White Collar Fic: The Long Haul Back - The Blasted Butterfly's Conservatory. The Long Haul Back Rating: PG-13 – gunshot wound, blood Summary: No cellphones, no tracking anklet, and a lot of miles to cover before Neal and Peter are out of the woods. The non-figurative kind of woods. To help the odds, Neal's shot in the leg.