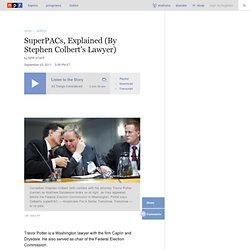 Texas Gov. Stephen Colbert is using a loophole to form a super PAC and publicize problems [Archive] - IDigMyGarden Forums. This should be interesting. 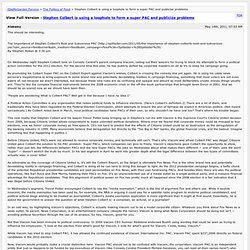 The Importance of Stephen Colbert's Bold and Subversive PAC ( By Stephen Hoban @ 3:30 pm On Wednesday night Stephen Colbert took on Comedy Central's parent company Viacom, calling out their lawyers for trying to block his attempts to form a political action committee for the 2012 election. For the second time this year, he has publicly defied his corporate masters on air to try to keep his campaign going. By promoting his Colbert Super PAC on the Colbert Report against Viacom's wishes, Colbert is crossing the comedy line yet again. He is using his cable news persona's megalomania to bring exposure to some brand new and potentially devastating realities in campaign financing, something that most voters are not even aware of, not because we aren't interested, but because these new rules are as confusing and opaque and absurd as most deliberately cryptic money things usually are.

How Super PACs Work" Documents filed with the Federal Election Commission (FEC) usually generate enthusiasm and excitement amongst only a very small coterie of political reporters and pundits, who pore over how much money candidates and organizations have brought in as an indication of their electoral strength. 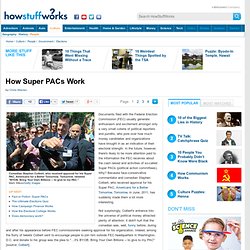 In the future, however, there's likely to be more attention paid to the information the FEC receives about the cash raised and activities of so-called Super PACs (political action committees). Why? Because faux-conservative commentator and comedian Stephen Colbert, who received approval for his Super PAC, Americans for a Better Tomorrow, Tomorrow, in June, 2011, has suddenly made them a lot more interesting. Not surprisingly, Colbert's entrance into the universe of political money attracted plenty of attention; it didn't hurt that the comedian was, well, funny before, during and after his appearance before FEC commissioners seeking approval for his organization.

Super PACs - What Are They?⎢Civics in a Minute⎢TakePart TV. How Much Are Super PACs Spending? - The Wall Street Journal. Super Pacs Explained. Script They may sound like superheroes — but Super Pacs don't save the world (or politics) from the bad guys. 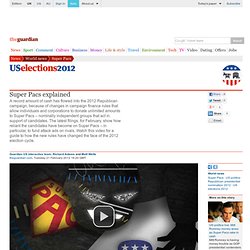 These strange legal hybrids are more Godzilla than Superman — and they're all over the 2012 Republican race... Back in more innocent political times, Pacs went about their business - raising money for candidates or parties — with much less controversy. There were strict rules on the amounts that individuals and organizations could donate — and even more restrictions on when and how Pacs could spend their money. Super PAC Definition - Questions and Answers. What is a super PAC? 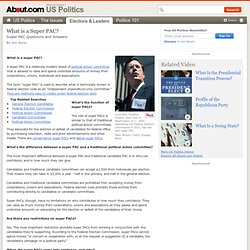 A super PAC is a relatively modern breed of political-action committee that is allowed to raise and spend unlimited amounts of money from corporations, unions, individuals and associations. The term "super PAC" is used to describe what is technically known in federal election code as an "independent expenditure-only committee. " Cheat sheet: How Super PACs work, and why they’re so controversial  Mark Wilson/Getty Images Comedian Stephen Colbert appears before the Federal Election Commission (FEC) to ask for a media exemption to create a political action committee (PAC) on June 30, 2011 in Washington, DC. 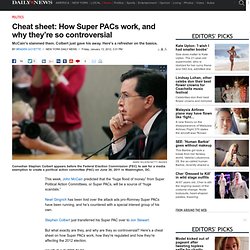 This week, John McCain predicted that the “huge flood of money” from Super Political Action Committees, or Super PACs, will be a source of “huge scandals.” Newt Gingrich has been livid over the attack ads pro-Romney Super PACs have been running, and he’s countered with a special interest group of his own. Stephen Colbert just transferred his Super PAC over to Jon Stewart. But what exactly are they, and why are they so controversial? Here's a cheat sheet on how Super PACs work, how they're regulated and how they’re affecting the 2012 election.

Super PACs are organizations that can raise unlimited funds from individuals, corporations, and other groups to support or defeat a political candidate. In Citizens United v. But they've been allowed to push this line pretty far. Political Action Committees. What is a PAC? 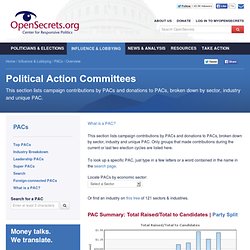 This section lists campaign contributions by PACs and donations to PACs, broken down by sector, industry and unique PAC. Only groups that made contributions during the current or last two election cycles are listed here. To look up a specific PAC, just type in a few letters or a word contained in the name in the search page. Or find an industry on this tree of 121 sectors & industries. PAC Summary: Total Raised/Total to Candidates | Party Split Top PACs Giving to Candidates NOTE: PACs with diversified interests are listed under their primary business (e.g., you'll find Boeing under "defense aerospace" rather than "aircraft manufacturers".). Also, for ease of identification, the names used in this section are those of the organization connected with the PAC, rather than the official PAC name.