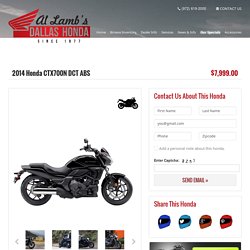 Reliable and confidence-inducing, this bike brings on the technology as well. An available automatic (DCT) transmission and ABS version provide smooth shifting and strong stopping in less than ideal conditions. Plus, there are always more options for fine-tuning your bike’s looks and functionality through the addition of Honda Genuine Accessories. The CTX700N Automatic Transmission offers incredible technology for simplified operations. With dual clutch transmission (DCT), riders can shift with the push of a handlebar-mounted button, or select the automatic mode and the bike will shift itself. Plus, riders can enjoy Honda’s innovative anti-lock brake system (ABS) for improved stopping in less than ideal conditions. 2014 Honda Gold Wing GL1800 F6B - Al Lamb’s Dallas Honda. Al Lamb’s Dallas Honda: 2015 Honda FourTrax Foreman Rubicon 4×4. Al Lamb&#39;s Dallas Honda: Team Honda Ready for the 2015 Supercross Season. 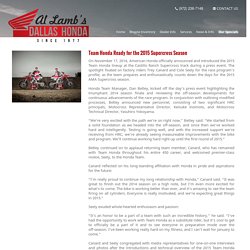 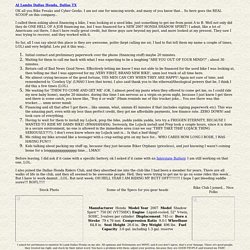 I am not one for mincing words, and many of you know that... So here goes the REAL SCOOP on this company... I called them asking about financing a bike, I was looking at a used bike, just something to get me from point A to B. Well not only did they do one hell of a job financing me, but I was financed for a NEW 2007 HONDA SHADOW SPIRIT! I admit, like a lot of Americans out there, I don't have really great credit, but these guys saw beyond my past, and more looked at my present. So far, all I can say about this place is they are awesome, polite (kept calling me sir, I had to flat tell them my name a couple of times, LOL) and very helpful. Initial contact and preliminary paperwork over the phone (financing stuff) maybe 20 minutes. 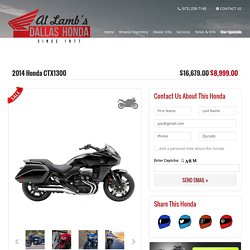 The CTX1300 family of bikes has taken a proven formula and completely reinvented it. With innovations in the bodywork and smart decisions like integrated saddlebags, the CTX1300 is proof that Honda knows how to progress the sport-tour motorcycle. This street bike outperforms with 1261cc V-4 engine with plenty of power. Tuned for more low-to-midrange torque in the city and loads of roll-on power for the open road, the CTX1300 greatly enhances your touring experience. It has a low-maintenance shaft drive, minimalist windscreen and lockable hard bags designed for the long haul. The CTX1300 stands alone as unique and advanced sport-tour motorcycle with refined styling. Al Lamb's Dallas Honda: About Us.