Buttermilk Doughnuts. These old-fashioned cake doughnuts, aromatic with cinnamon and nutmeg, are easy to prepare. 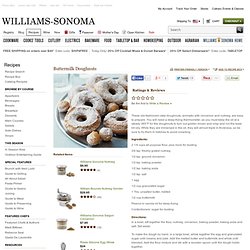 You will need a deep-frying thermometer, as you must keep the oil at a steady 365°F for the doughnuts to turn out golden brown and crisp and not the least bit oily. While they are immersed in the oil, they will almost triple in thickness, so be sure to fry them in batches to avoid crowding. In a bowl, sift together the flour, nutmeg, cinnamon, baking powder, baking soda and salt. Set aside. To make the dough by hand, in a large bowl, whisk together the egg and granulated sugar until creamy and pale. To make the dough with an electric mixer, in a large bowl, beat together the egg and granulated sugar on low speed until creamy and pale. Line a platter with paper towels. Turn the dough out onto a lightly floured work surface. When the oil is hot, place 2 doughnuts and 2 doughnut holes into the oil and fry until deep golden brown, about 2 minutes. Www.food.com/recipe/buttermilk-doughnuts-donuts-91792.

Cheeky Kitchen » Baked Pumpkin Donuts. I like pumpkins. We carved four fat, round jack-o-lanterns tonight. The table piled high with seeds and entrails. The faces of four custom-created characters emerging from orange canvas. Snaggle toothed and triangle eyed, I fell in love with every one, their funky faces seemed somehow familiar. Baked Pumpkin Spice Donut Holes « The Craving Chronicles.

I might be harboring a slight pumpkin obsession right now. 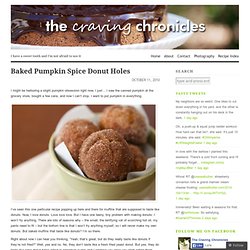 I just… I saw the canned pumpkin at the grocery store, bought a few cans, and now I can’t stop. I want to put pumpkin in everything. I’ve seen this one particular recipe popping up here and there for muffins that are supposed to taste like donuts. Now, I love donuts. Love love love. Right about now I can hear you thinking, “Yeah, that’s great, but do they really taste like donuts if they’re not fried?” Printable RecipeAdapted from Tasty Kitchen Makes 20-24 mini muffins Don’t worry – you don’t actually use the whole stick of butter for the coating, it just makes it easier to dip the muffins. Ingredients For Donuts 1 3/4 cups all-purpose flour 2 teaspoons baking powder 1/2 teaspoon salt 1/2 teaspoons cinnamon 1/2 teaspoons nutmeg 1/2 teaspoon allspice 1/8 teaspoons ground cloves 1/3 cup vegetable oil 1/2 cup brown sugar 1 egg 1 teaspoon vanilla extract 3/4 cup canned plain pumpkin (not pumpkin pie filling) 1/2 cup low-fat milk.

Churros with Chocolate Dipping Sauce » toasty biscuit. The other day my friend sent me a text and asked, “I want to try making doughnuts and want to make churros but they look difficult. 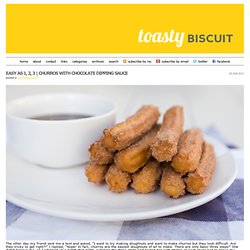 Are they tricky to get right?!” I replied, “Nope! In fact, churros are the easiest doughnuts of all to make. There are only basic three steps!” She didn’t believe me, so I whipped up a batch that night, outlining the three steps and texted her with photos at each stage just to prove my point (hooray for technology!). She was so surprised that it only took me about twenty minutes to prepare a fresh batch of these delicious crispy doughnuts.

Chocolate Éclairs with Vanilla Bean Crème Pâtissière Recipe. Posted by Grace Massa Langlois on Thursday, 21st October 2010 These sinfully delicious Chocolate Éclairs with Vanilla Bean Crème Patissière and Chocolate Ganache Glaze are sure to win the heart of any chocolate lover. An éclair is an oblong shaped pastry made with pâte à choux (choux pastry or pasta choux) and is sometimes filled with cream. Crème pâtissière (crema pasticcera) is my all-time favourite. I could eat a whole bowl in one sitting! Other fillings include sweetened whipped cream or custard. If you’ve never had the pleasure of indulging in a chocolate éclair you are missing out! I personally cannot imagine life without chocolate, but if you’re not a big chocolate lover, Patricia from Technicolor Kitchen posted an amazing quick and easy recipe for Lemon Cream Éclairs (can’t wait to try this).

Sure you can buy these at the local pastry shop or a version of them at the donut shop, but surprisingly Éclairs are very easy to make at home. To shape Éclairs Puffs. Portuguese Apple Fritters -DK. French crullers: doughnut week. French crullers are probably one of my favorite kinds of doughnuts. 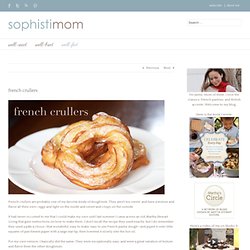 They aren’t too sweet, and have a texture and flavor all their own—eggy and light on the inside and sweet and crispy on the outside. It had never occurred to me that I could make my own until last summer I came across an old Martha Stewart Living that gave instructions on how to make them. I don’t recall the recipe they used exactly, but I do remember they used a pâte à choux—that wonderful, easy to make, easy to use French pastry dough—and piped it onto little squares of parchment paper with a large star tip, then lowered it slowly into the hot oil.

For my own version, I basically did the same. They were exceptionally easy, and were a great variation of texture and flavor from the other doughnuts. french crullers 1. 2. 3. 4. For the glaze: