The Linux Information Project (LINFO) Home Page. General Information. A: The name "Linux" is used to refer to three similar yet slightly different things, which can be confusing to all but the hardcore geek. 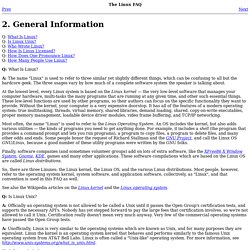 The three usages vary by how much of a complete software system the speaker is talking about. At the lowest level, every Linux system is based on the Linux kernel — the very low-level software that manages your computer hardware, multi-tasks the many programs that are running at any given time, and other such essential things. These low-level functions are used by other programs, so their authors can focus on the specific functionality they want to provide. Without the kernel, your computer is a very expensive doorstop. It has all of the features of a modern operating system: true multitasking, threads, virtual memory, shared libraries, demand loading, shared, copy-on-write executables, proper memory management, loadable device driver modules, video frame buffering, and TCP/IP networking. 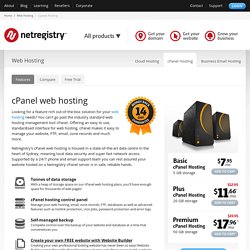 You can't go past the industry standard web hosting management tool cPanel. Offering an easy to use, standardised interface for web hosting, cPanel makes it easy to manage your website, FTP, email, zone records and much more. Netregistry's cPanel web hosting is housed in a state-of-the-art data centre in the heart of Sydney, meaning local data security and super fast network access. Supported by a 24/7 phone and email support team you can rest assured your website hosted on a Netregistry cPanel server is in safe, reliable hands.

Tonnes of data storageWith a heap of storage space on our cPanel web hosting plans, you'll have enough space for thousands of web pages! cPanel Server Management Services by ServerManagementPlus. What is cPanel? - GreenGeeks® Websites are hosted on various web-hosting platforms to be published on World Wide Web. 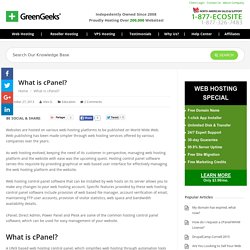 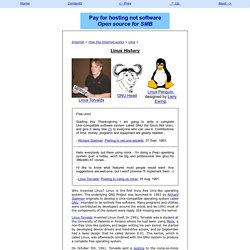 Linux is the first truly free Unix-like operating system. The underlying GNU Project was launched in 1983 by Richard Stallman originally to develop a Unix-compatible operating system called GNU, intended to be entirely free software. Many programs and utilities were contributed by developers around the world, and by 1991 most of the components of the system were ready. Still missing was the kernel. Linus Torvalds invented Linux itself. On October 5th, 1991, Torvalds sent a posting to the comp.os.minix newsgroup announcing the release of Version 0.02, a basic version that still needed Minix to operate, but which attracted considerable interest nevertheless. On January 5, 1992, Linux Version 0.12 was released, an improved, stable kernel. Torvalds released Version 0.11 under a freeware license of his own devising, but then released Version 0.12 under the well established GNU General Public License. History of Linux. The history of Linux began in 1991 with the commencement of a personal project by Finnish student Linus Torvalds to create a new free operating system kernel. 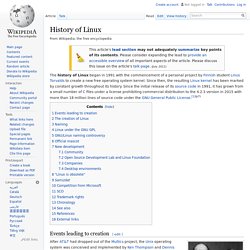 Since then, the resulting Linux kernel has been marked by constant growth throughout its history. Since the initial release of its source code in 1991, it has grown from a small number of C files under a license prohibiting commercial distribution to the 4.2.3 version in 2015 with more than 18 million lines of source code under the GNU General Public License.[1](p7) Events leading to creation[edit] Ken Thompson and Dennis Ritchie Another free operating system project, initially released in 1977, was the Berkeley Software Distribution (BSD). Servertechmanagement - Web Server Management. Multiele Directory cPanel Server Management - Details - Live Stats <a href=" Stats</a> Statistics & Page RankActive Links: 4963Pending Links: 168Todays Links: 5Total Categories: 14Sub Categories: 428. 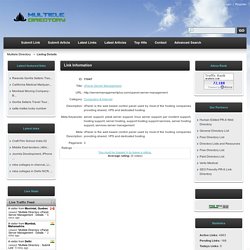 Information about the Linux OS (Operating System) Linux can freely be qualified as an Internet phenomenon. 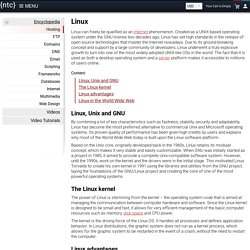 Created as a UNIX-based operating system under the GNU license two decades ago, Linux has set high standards in the release of open-source technologies that master the Internet nowadays. Due to its ground-breaking concept and support by a large community of developers, Linux underwent a truly explosive growth to turn into one of the most widely adopted UNIX-like OSs in the world. The fact that it is used as both a desktop operating system and a server platform makes it accessible to millions of users online.

Linux, Unix and GNU By combining a lot of key characteristics such as fastness, stability, security and adaptability, Linux has become the most preferred alternative to commercial Unix and Microsoft operating systems. Based on the Unix core, originally developed back in the 1960s, Linux retains its modular concept, which makes it very stable and easily customizable. What is Linux ? - Definition from WhatIs.com. Linux (often pronounced LIH-nuhks with a short "i") is a Unix-like operating system that was designed to provide personal computer users a free or very low-cost operating system comparable to traditional and usually more expensive Unix systems. 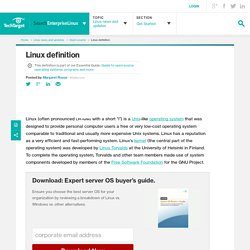 Linux has a reputation as a very efficient and fast-performing system. Linux's kernel (the central part of the operating system) was developed by Linus Torvalds at the University of Helsinki in Finland. To complete the operating system, Torvalds and other team members made use of system components developed by members of the Free Software Foundation for the GNU Project. By submitting your email address, you agree to receive emails regarding relevant topic offers from TechTarget and its partners. You can withdraw your consent at any time. Linux Server Management Services. Odin (Parallels) Plesk Monitoring Extension (Plugin) - Anturis. Server and software monitoring is configured automatically Simply create an account and Anturis will automatically fetch the server’s configuration and set up monitoring of the server’s resources, such as Apache, FTP, Email, Plesk itself, and so on. 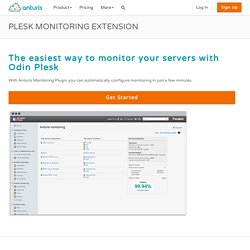 Information Technology Services. OpenVZ, Xen Server Management Services provided... Windows Server Operating Systems and Microsoft Applications resources and information - SearchWindowsServer. What you need to know about Windows Server 2016 - Techradar India. Introduction While Windows 10 is something of a retreat on Microsoft's part, back to the familiar desktop and Start menu, Windows Server 2016 is a much bolder move. 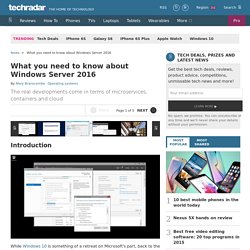 Although you'll be able to treat it as just another version of Windows Server if you want – with a range of improvements in security, virtualisation, networking and storage, suitable for sharing files and running applications like Exchange and SQL Server for businesses small and large – it's also designed to be a very different platform for a new style of applications. As well as the traditional n-tier client-server architecture and the familiar approach of virtual machines, Windows Server 2016 will also support applications built using microservices and containers. Docker on Windows Server: how will it work? Containers and microservices. Server Support Services - ServerManagementPlus. VPS Server Management - Server Tech Support. The Linux Documentation Project. Linux Today - Linux News on Internet Time.

24x7 Per Incident Support - Server Management Plus. Server Virtualization Requires More Thought for Energy Use - Energy Manager Today. With many organizations choosing virtualization for their IT systems, there are more considerations for data center managers to find a balance between energy efficiency and performance. A single server may host a number of virtualization clients with loads increasing and decreasing sporadically.

According to an article in CIO Asia, metrics such as Power Usage Effectiveness (PUE) can be misleading in virtualized environments, and efforts to improve PUE at the server level can become excessively complex and counter-productive. It’s better to combine device-level optimization with a holistic system-level view, perhaps using a Data Center Infrastructure Management (DCIM) tool. The CIO Asia article advises the data center manager to use DCIM in four steps: Audit the deployed equipment and its performance. Photo: Servers via Shutterstock. New SQL Server Management Studio 2015/June - with Check for Updates!

This morning, Microsoft announced a new standalone SQL Server Management Studio download: This is our first effort to release SQL Server Management Studio (SSMS) in a mechanism outside of the SQL Engine releases. Our goal is to update this frequently with new features, fixes and support for the newest SQL Server features in SQL Server Engine and Azure SQL Database. Awww yeah! Lightweight installer, and here’s the best part: there’s a built-in check for updates. ServerTechSupport. 18 Open Source/Commercial Control Panels to Manage Linux Servers. As an owner of the website it is very difficult to manage multiple websites without a control panel. However to suit the needs, we need a custom hosting plan. A Web hosting control panel is a totally web-based interface which has capability to manage your web services under a single location.

The tools we’ll discuss in this article are all free. Puppet Open Source Puppet is available in both a free open source version and a paid commercial version known as Puppet Enterprise, which includes extra features and support. Server Management Adds MDS Services. By David Hamilton, theWHIR.com. Facebook’s OpenBMC Can Now Do Facebook Server Management. Facebook has enhanced its open source software that handles certain hardware management functions so that it can support one of numerous Facebook server designs. Until recently, the company was only using the software to manage its own switch hardware. The software is called OpenBMC, which is Facebook’s open source version of Baseboard Management Controller software used for managing hardware temperature, energy usage and other functions. DMTF signs off Redfish server management spec v 1.0. The Distributed Management Task Force (DMTF) has announced the completion of the Redfish standard, an effort to enable management of heterogeneous computing resources at cloud scale.

Redfish's backers are a who's who of enterprise computing players: Broadcom, Dell, Emerson, HP, Intel, Lenovo, Microsoft, Supermicro and VMware are all aboard, with "additional support" provided by AMI, Oracle, Fujitsu, Huawei, Mellanox and Seagate. The new standard is advanced as the heir to Intelligent Platform Management Interface (IPMI), an effort that Redfish's backers feel isn't quite up to the job of running commodity servers at cloud scale.

Just a quick note to let you know that the "System Center Management Pack for Windows Server Operating System" has been updated. The newest version has the below changes. - In 2008, 2012 platforms, the “Logical Disk Free Space (%) Low” monitor do not alert as expected when free space is 0%. With this fix, this monitor will alert when free space is 0% CA Technologies Joins Open Mainframe Project. 18 Open Source/Commercial Control Panels to Manage Linux Servers. Windows Server Containers arrive, with Docker support. Microsoft developers hungry for their first taste of Windows-native container technology can finally sate themselves.