Breakout Board for Wireless Devices Using the Nordic nRF24L01+ Recently I’ve been playing a lot with sensors around the house and I’ve decided to make myself a breakout board with all of the common parts the sensor board, including the power supply, microcontroller, wireless interface and battery charger. 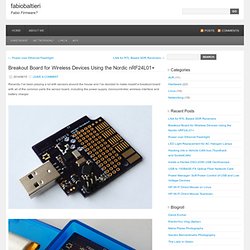 This board can be used to quickly deploy some sensors or actuators, and can be configured to work from battery (for low power applications) or from an USB port (to be used with phone charger). The PCB fits into an Hammond 1551R box. Microcontroller The board mounts an ATMega88PA, using the QFN package to keep the space utilization minimal. Nrf24l01.jpg (imagem JPEG, 649 × 243 pixels) 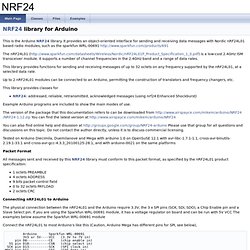 It provides an object-oriented interface for sending and receiving data messages with Nordic nRF24L01 based radio modules, such as the sparkfun WRL-00691 The nRF24L01 ( is a low-cost 2.4GHz ISM transceiver module. It supports a number of channel frequencies in the 2.4GHz band and a range of data rates. This library provides functions for sending and receiving messages of up to 32 octets on any frequency supported by the nRF24L01, at a selected data rate. Up to 2 nRF24L01 modules can be connected to an Arduino, permitting the construction of translators and frequency changers, etc. This library provides classes for NRF24: addressed, reliable, retransmitted, acknowledged messages (using nrf24 Enhanced Shockburst) Example Arduino programs are included to show the main modes of use.

Fran's Writings on Design and Engineering Page 5. Cracking the Code of the Apollo Saturn V LVDC Logic Devices(February 2013) I spent many late nights in squinty-eyed examination of the X-rays we took of the LVDC board, and plowed through hundreds of pages of publicly available documents about the IBM System/360 looking for clues that would help unravel the convoluted maze of puzzle pieces and reveal the nature of the LVDC logic devices. 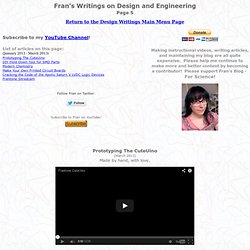 IBM developed the System/360 and the LVDC in tandem, and I expected that there would be much crossover of the two systems. In the end I found that these systems had surprisingly little in common in their gate designs, and some surprising facts emerged. PlanetArduino. Mchr3k - Arduino: February 2012. It's finally time to build my first proper prototype wireless sensor node. 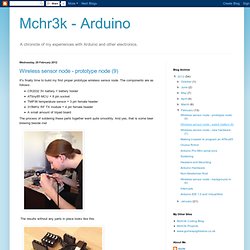 The components are as follows:CR2032 3V battery + battery holderATtiny85 MCU + 8 pin socketTMP36 temperature sensor + 3 pin female header315MHz RF TX module + 4 pin female headerA small amount of tripad board The process of soldering these parts together went quite smoothly. And yes, that is some beer brewing beside me! The results without any parts in place looks like this. Sending a data array over nrf24l01 with mirf ??? how? So im trying to send a multiple byte array over the nrf24L01, however i cant seem to figure out how to do it, and i cant seem to find much documentation! 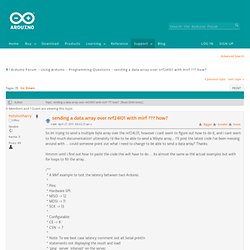 Ultimately i'd like to be able to send a 16byte array... I'll post the latest code i've been messing around with ... could someone point out what i need to change to be able to send a data array? Thanks. Diyembedded.com. nRF24L01-RF24-Examples. I want some idea/library to defense "Replay Attack" for my NRF24L01+Arduino. 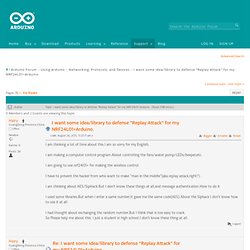 (So sorry for my English)Like this:TX:|ID||PC||Time||millis()||random1||random1()||Enc||the encrypted "millis()"and"random1"|RX:received the TX millis and random.than encrypt it .And compare the TX Enc with self enc.If true than pass.If false that ask tx re-transmit.Of course I will make them together by this way. "millis*random"/"millis+random"/"millis/random"/"millis^random"It need about 50 days to reset the millis.When millis has been reset.TX can send a packet let RX reset the time log.Of course it need auth.

Lib-nRF24L01/crypto at master · regan89/lib-nRF24L01. A byte-oriented AES-256 implementation. On Nov 11, 2007 by Ilya Levin As you may know, I do cryptographic perversions occasionally. 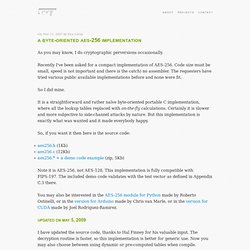 Recently I've been asked for a compact implementation of AES-256. Code size must be small, speed is not important and (here is the catch) no assembler. The requesters have tried various public available implementations before and none were fit. Merrick McCracken: AES Encryption on the MSP430 Launchpad. I recently got a couple of NRF24L01+ radios from my favorite auction site. 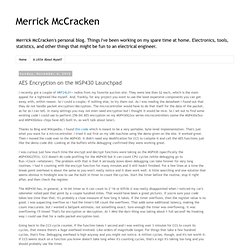 They were less than $2 each, which is the main appeal for a tightwad like myself. And, frankly, for any project you want to use the least expensive components you can get away with, within reason. So I could a couple, if nothing else, to try them out. As I was reading the datasheet I found out that they do not handle packet encryption/decryption. The microcontroller would have to do that itself for the data of the packet, as far as I can tell. Nrf24l01 AES crypto - Google Search. nRF24L01 Report. The nRF24L01 MiRF-v2 Radio Module This report documents the nRF24L01 data radio. 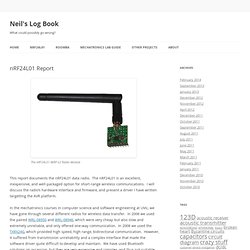 The nRF24L01 is an excellent, inexpensive, and well-packaged option for short-range wireless communications. I will discuss the radio’s hardware interface and firmware, and present a driver I have written targetting the AVR platform. In the mechatronics courses in computer science and software engineering at UVic, we have gone through several different radios for wireless data transfer. In 2006 we used the paired WRL-08950 and WRL-08946, which were very cheap but also slow and extremely unreliable, and only offered one-way communication. Nrf24l01 - A driver for using the nRF24L01 radio on AVR / Arduino. Nrf24l01 interrupt arduino - Google Search. NRF24L01+ timing and IRQ interrupts - Grupos do Google. Updating to use the arduino spi library. · 1fc7575 · aaronds/arduino-nrf24l01. Nrf24L01. MatHertel's WebLog: Hints on using NRF24L01+ with Arduino. RF24 Library: Driver for nRF24L01(+) 2.4GHz Wireless Transceiver.

First let me say I very much appreciate the quality of your wiki docs. 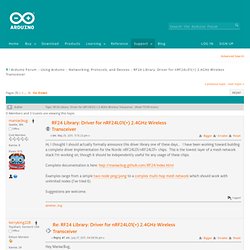 Your pages were one of the reasons I decided to further explore my sprinkler project; whereby the relay board is central. Gerg, you said: And if you're also interested in the Mirf library, expect a minor update in the near future. Lastly, if you have P-variant hardware, I would very much love to hear about range testing when operating in 2Mbs, 1Mbs, and 250kbs bandwidth modes. Nrf2401. :: Nrf2401 :: This library provides an interface to Nordic's Nrf2401 2.4GHz radio transceiver. The module used for testing was a small breakout from Sparkfun. The Nrf2401 is a half-duplex transceiver, so while it has the ability to send and receive data, it cannot do both simultaneously. With this library Arduino can program it to choose from 256 possible channels, select from 65536 possible recipient addresses, and deliver anywhere between 1 and 25 bytes of raw data per packet at transmission rates of up to 1 megabit per second.

nRF24L01 Report. » Extended node IDs JeeLabs. The packet relay implementation shown a few days ago has some properties which somewhat limit its usability. It all has to do with node IDs. As a relay it all works fine, i.e. packets will get relayed as intended. But the problem is that with a relay, all the packets relayed into another netgroup appear to come from that single relay node.

To go into this, let’s first set up a relay with the following configuration: the main netgroup is #1, the relay listens on netgroup #2the central node in netgroup 1 is node 31the relay node listens on netgroup 2 as node 31the relay sends packets out to netgroup 1 as node 30 Here’s that setup: So – in principle – we could have up to 59 sensor nodes for getting actual work done. » Relaying RF12 packets JeeLabs. Since the RF12 driver does not implement a full OSI network “stack”, there are no such things as routers and mesh networks in Jee-land. This means you’re basically limited to the range of a single 868/915 MHz point-to-point packet connection. There are a number of ways to increase the range. » Search Results » mesh JeeLabs. In yesterday’s post I introduced a groupRelay.pde sketch, which implements a packet relay. This can be used to (approximately) double the range between sensor nodes and the central data-collecting node. I’ve got two uses for this myself: RF24Network for Wireless Sensor Networking.

Woodhouse. A couple of posts ago I showed off how I made the lights in my room turn on and off with a sonic screwdriver universal remote. Search Results nrf24l01. Nrf24l01+ pinout - Google Search. X-warrior/RF24SH. RF24SH – Smart Home. Nrf24L01. Home Automation – Designing a remote module » Makerflux. The desire to start a project in home automation started about 5 years ago, at the point I bought my first home. Having installed spot lighting in the floor, I wanted to have them switch on during dark hours when we were using the room. Using the nRF24L01 wireless module. I decided it was time for me to play around with wireless communication as I recently purchased a wireless alarm system. Low-Power Wireless Sensor Node. Nrf2401. Nrf24l01+ control with 3 ATtiny85 pins. Long range RF link using NRF24L01+ RF Transceiver. Creating a two way wireless link is fun and exciting.

RF24Network: Comparison to ZigBee. This network layer is influenced by the design of ZigBee, but does not implement it directly. RF24Network: Network Layer for RF24 Radios. This class implements an OSI Network Layer using nRF24L01(+) radios driven by the RF24 library. Purpose/Goal. Nrf24L01-2.4GHz-HowTo. Having two or more Arduinos be able to communicate with each other wirelessly over a distance opens lots of possibilities:Remote sensors for temperature, pressure, alarms, much moreRobot control and monitoring from 50 feet to 2000 feet distancesRemote control and monitoring of nearby or neighborhood buildingsAutonomous vehicles of all kinds These are a series of 2.4 GHz Radio modules that are all based on the Nordic Semiconductor nRF24L01+ chip.