Scargill's Tech Blog. Introduction (Latest update 22/JUNE/2015) If you’ve read my early blogs you’ll know I do a lot of work with a pal of mine, Aidan Ruff. 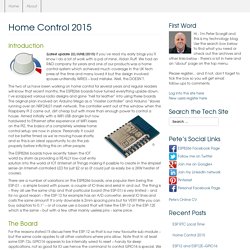 We had an R&D company for years and one of our products was a home control system which achieved much coverage in the UK tech press at the time and many loved it but the design involved spouse-unfriendly WIRES – bad mistake. Well, this DOESN’T. The two of us have been working on home control for several years and regular readers will know that recent months, the ESP8266 boards have turned everything upside-down. I’ve scrapped various radio designs and gone “hell for leather” into using these boards. Armed initially with a WIFI USB dongle but now hardwired to Ethernet after experience of WIFI losses on the Pi2, the basics of a completely wireless home control setup are now in place. There are a number of variations on the ESP8266 boards, one popular item being the ESP-01 – a simple board with power, a couple of IO lines and serial in and out.

The Board i.e. ESP8266 Firmware Update - taylorcoffelt.com. Below is an explanation of why you want to upgrade, and how I found this way of doing it. 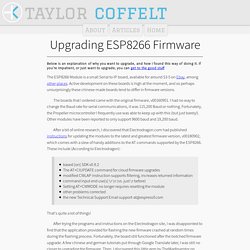 If you're impatient, or just want to upgrade, you can get to the good stuff The ESP8266 Module is a small Serial to IP board, available for around $3-5 on Ebay, among other places. Active development on these boards is high at the moment, and so perhaps unsurprisingly these chinese-made boards tend to differ in firmware versions. The boards that I ordered came with the original firmware, v00160901. I had no way to change the Baud rate for serial communications, it was 115,200 Baud or nothing. After a bit of online research, I discovered that Electrodragon.com had published instructions for updating the modules to the latest and greatest firmware version, v00180902, which comes with a slew of handy additions to the AT commands supported by the ESP8266.

That's quite a lot of things! It worked brilliantly, and without a hitch. How to Upgrade You will need: An ESP8266 ModulePython 2.7 installed. 5 Open Source Home Automation Projects We Love. With big-name companies like Google and Apple entering the space, 2014 has been the year of smart homes. 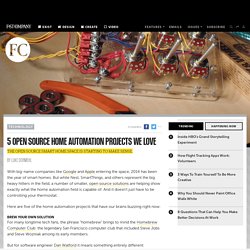 But while Nest, SmartThings, and others represent the big heavy hitters in the field, a number of smaller, open source solutions are helping show exactly what the home automation field is capable of. And it doesn’t just have to be controlling your thermostat. Here are five of the home automation projects that have our brains buzzing right now: Brew Your Own Solution For many longtime tech fans, the phrase "homebrew" brings to mind the Homebrew Computer Club: the legendary San Francisco computer club that included Steve Jobs and Steve Wozniak among its early members. But for software engineer Dan Watford it means something entirely different: homebrewed ales. In response he started by rigging up a DS18B20 temperature sensor to a Raspberry Pi to create an intelligent way of monitoring temperature: not just from moment to moment, but in a way that visualizes the info over time.

OpenHAB. Inside the Chinese Bitcoin Mine That's Making $1.5M a Month. Despite its dystopian appearance, the group’s six mining farms encompass eight petahashes of computing power, whose brute force, as of October, accounted for 3 percent of the entire Bitcoin network. 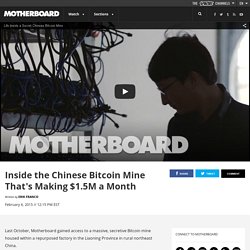 If you’ve bought or sold or conducted any Bitcoin transaction recently, these are some of the folks you have to thank. Strangely, the mine’s workers actually live inside the facility itself, returning home just four or five days a month. In the summer months, temperatures inside are in excess of 100 degrees, and a persistent, deafening buzz is always present due to the dozens of industrial fans required to maintain a steady temperature for the site’s 3,000 ASIC miners—custom-built computers specifically built for mining bitcoins.

A world of MQTT on ESP8266. Controle TRIAC com Arduino (Dimmer) SDWebServer – enc28J60 and Arduino (20) In the previous blog post, you learned how to send big files (html pages, images…) with your ENC28J60 shield. 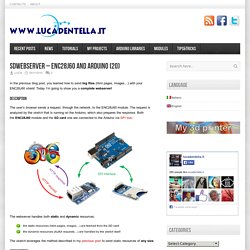 Today I’m going to show you a complete webserver! Description. Search Results – enc28j60. SDWebServer – enc28J60 and Arduino (20) In the previous blog post, you learned how to send big files (html pages, images…) with your ENC28J60 shield. 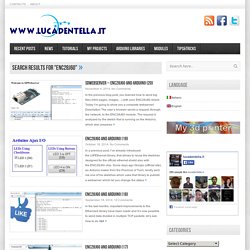 Today I’m going to show you a complete webserver! Description The user’s browser sends a request, through the network, to the ENC28J60 module. The request is analyzed by the sketch that is running on the Arduino, which also prepares » enc28J60 and Arduino (19) Enc28J60 and Arduino (15) Today’s tutorial is about a request by Martin: write a sketch to access to a protected area (using username and password) of a website. 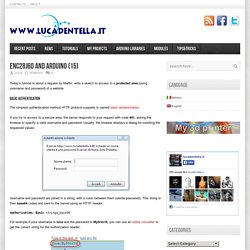