Five secrets of a PI insurance broker. Two professional indemnity (PI) insurance brokers lift the lid on what makes insurers twitch, why adviser excesses are so high and the next big claims danger... 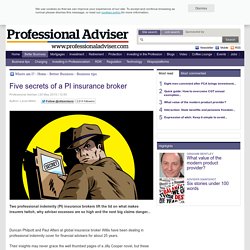 Duncan Philpott and Paul Afteni at global insurance broker Willis have been dealing in professional indemnity cover for financial advisers for about 25 years. Their insights may never grace the well thumbed pages of a Jilly Cooper novel, but these five frank disclosures will beat any kiss-and-tell story for advisers keen to keep in business... 1. Defined benefit and deniability Insurers tend to only focus on one area at a time. We've been acting for advisers since the '90s. In 1994, prior to the pension review, advisers were considered the lowest risk. That was a fundamental change to PI. 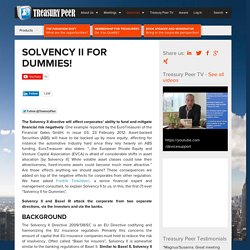 One example reported by the EuroTreasurer of the Financial Gates GmbH, in issue 03, 23 February 2012: Asset-backed Securities (ABS) will have to be backed up by more equity, affecting for instance the automotive industry hard since they rely heavily on ABS funding. EuroTreasurer also states: “…the European Private Equity and Venture Capital Association (EVCA) is afraid of considerable shifts in asset allocation [by Solvency II]: While volatile asset classes could lose their attractiveness, fixed-income assets could become much more attractive.” Are those effects anything we should aspire? These consequences are added on top of the negative effects for corporates from other regulation. We have asked Fredrik Torkildsen, a senior financial expert and management consultant, to explain Solvency II to us, in this, the first (?) 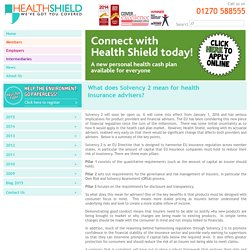 It will come into effect from January 1, 2016 and has serious implications for product providers and financial advisers. The EU has been considering this new piece of financial regulation since the turn of the millennium. There was some initial uncertainty as to how it would apply in the health cash plan market. However, Health Shield, working with its actuarial advisers, realised very early on that there would be significant change that affects both providers and advisers. 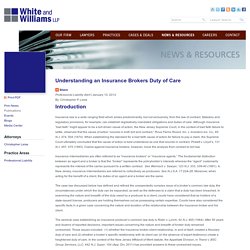 Leise Insurance law is a wide ranging field which arises predominantly, but not exclusively, from the law of contract. Statutory and regulatory provisions, for example, can establish legislatively mandated obligations and duties of care. Although insurance “bad faith” might appear to be a tort driven cause of action, the New Jersey Supreme Court, in the context of bad faith failure to settle, observed that the cause of action “sounds in both tort and contract.” Insurance intermediaries are often referred to as “insurance brokers” or “insurance agents.”

The case law discussed below has defined and refined the unexpectedly complex issue of a broker’s common law duty, the circumstances under which the duty can be expanded, as well as the defenses to a claim that a duty has been breached. The seminal case establishing an insurance producer’s common law duty is Rider v.

Wp213_en.pdf. Employee Error Causes Data Breach at Insurance Broker. Willis North America recently began notifying an undisclosed number of employees that their personal information may have been exposed when a health plan administrator mistakenly attached a spreadsheet containing sensitive data to an e-mail sent on March 19, 2014 to company employees who were enrolled in the Willis North America Medical Expense Benefit Plan's Healthy Rewards Program, to remind them of an upcoming deadline to earn wellness credits (h/t PHIprivacy.net). 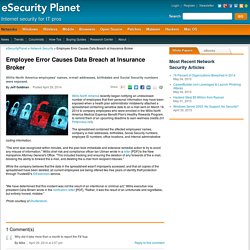 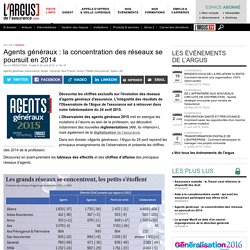 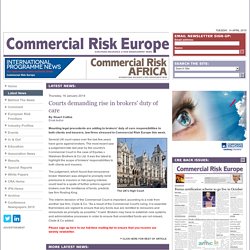 The UK's High Court Several UK court cases over the last few years have gone against brokers. The most recent saw a judgement late last year by the country's Commercial Court in the case of Equitas v Walsham Brothers & Co Ltd. It was the latest to highlight the scope of brokers' responsibilities to both clients and insurers. The judgement, which found that reinsurance broker Walsham was obliged to promptly remit premiums to insurers or risk paying interest, could lead to a spate of further actions against brokers over the remittance of funds, predicts law firm Rosling King.

The interim decision of the Commercial Court is important, according to a note from another law firm, Clyde & Co. Insurance-market-conditions-and-trends-2014-15-interactive.pdf.