Sexting: Tackling a growing problem. Plans to stop children being prosecuted for ‘sexting’ will not make life any easier for schools trying to tackle this modern phenomenon.

Karen Sullivan offers some practical advice At present, anyone found texting intimate images of themselves to others (or via any form of social media) could receive a criminal record and be included on a list with the Disclosure and Barring Service. This includes youngsters, who run the risk of getting a criminal record and ruining their future career options if they are found to be sending sexts. However, new ministerial guidelines to police, which are due to be approved by government and could be sent out “within weeks” advise that children who sext should not be prosecuted.

The reasoning is that this phenomenon is now considered a “normal part of modern growing up”. A recent report by the NSPCC suggests that 15 and 40 per cent of young people are involved, but other research suggests that this figure is probably much, much higher. And they share them. Sexting could give you police record after teen branded a paedophile for nude selfie. Police warn schoolchildren they could end up on police records for sextingChiefs said names would be stored for up to 100 years for indecent imagesYoungsters could be prosecuted and placed on the sex offenders’ registerIt came after boy, 14, was recorded for sending naked selfie via Snapchat By Arthur Martin for the Daily Mail Published: 23:29 GMT, 4 September 2015 | Updated: 00:01 GMT, 5 September 2015 Millions of schoolchildren were yesterday warned they could end up on a police database for life for texting a naked photo of themselves. 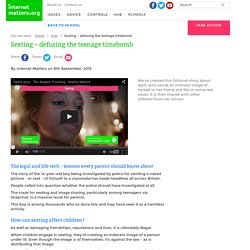 People called into question whether the police should have investigated at all. The craze for sexting and image sharing, particularly among teenagers via Snapchat, is a massive issue for parents. This boy is among thousands who’ve done this and may have seen it as a harmless activity. How can sexting affect children? As well as damaging friendships, reputations and lives, it is ultimately illegal. When children engage in sexting, they’re creating an indecent image of a person under 18. The proliferation of connected devices means there’s more opportunity for sharing, sending and shocking at the touch of a button, and images can now easily be shared among peer groups, leading to embarrassment, harassment and, in some cases, even blackmail.

Back to school - Internet Matters.