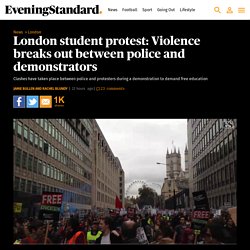 Footage has emerged of angry scuffles outside the Department for Business, Innovation and Skills building in Victoria Street between officers and a number of demonstrators. Witnesses also reported smoke bombs have been thrown at officers while riot vans are believed to be in attendance. No injuries were reported. A Met spokesman said a number of arrests have been made for public order offences after a small group of protesters threw paint outside the Home Office and another group attempted to push their way into the Department for Business Innovation and Skills building.

Final Draft Report of the Working Group on Fee-Free. Free education not for wealthy students - Nzimande. Parliament - The government's policy on free higher education is only for the poor, Higher Education Minister Blade Nzimande told Parliament on Wednesday. - Do you have any feedback on the government's current NSFAS funding scheme? 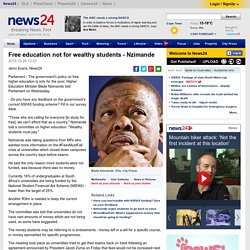 Fill in our survey here. "Those who are calling for everyone [to study for free], we can't afford that as a country," Nzimande told a committee on higher education. Blade's 2012 report: Free university education for the poor is feasible and should be pursued. At times the Report of the Working Group on Free University Education for the Poor in South Africa reads like an academic treaty from the #FeesMustFall movement. 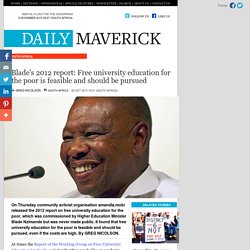 It notes: “The question that South Africans need to be asking is: What kind of a society are we trying to create? Blade denies withholding free education report. The minister, who was in Parliament presenting the funding implications of a zero increment in university fees in 2016 to Parliament’s standing and select committees on appropriations, as well as the portfolio committee on higher education, has responded to media reports that he had failed to act on a 2012 document that found it was possible to provide free university tuition to the poor. 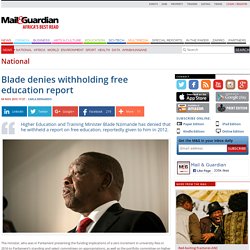 Cornered Blade releases fee-free university report “It is untrue that I have been sitting on this report,” said Blade Nzimande. “That is why those journalists who tried to publish the report could only write two paragraphs. “When that report was released, it was presented to all stakeholders,” said Nzimande. Finance & Development, June 2005 - Financing Higher Education. Financing Higher Education Nicholas Barr Reforms in Britain may provide a useful framework for other countries Higher education faces problems throughout the world: universities are underfunded, raising worries about quality; student support is inadequate; the proportion of students from disadvantaged backgrounds is lamentably small; and the financing of universities in many countries is regressive, since the money comes from general taxation but the major beneficiaries are from better-off backgrounds. 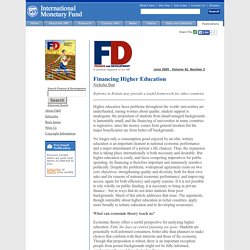 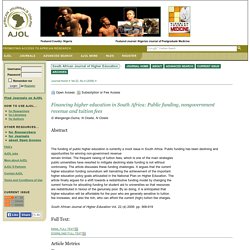 Creative Solutions to Higher Education Finance, Part 1. National Treasury. South Africa Students Fees Must Fall Protests Facts and Figures. JOHANNESBURG – As increasing numbers of South African students attempt to #shutdown academic institutions across the country – thanks in large part to protests by Wits University students, which were successful in suspending a 10.5% increase for 2016 – they should at least pay homage to what their colleagues in other countries pay for higher education. 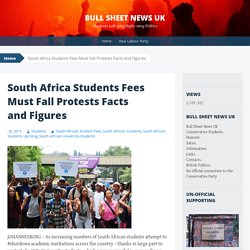 In the United States, in-state students paid on average $9 139 (roughly R118 000) for one year of tuition at a public university for the 2014/15 academic year. Out-of-state students – who would not have previously been funding the state’s education budget through taxes – paid $22 958 (R298 454) for one year of study at public universities,according to US-based non-profit, The College Board. “Among full-time undergraduates at public and private non-profit four-year institutions, the median published tuition and fee price in 2014-15 is $11 550,” The College Board notes. Source: HSBC Source: Journalist’s own research Like this: Like Loading... Students wear red in matriculation protest - The Oxford Student. Students wore red as they matriculated on Saturday in protest at what they say is the University’s continued celebration of colonialism and lack of diversity. 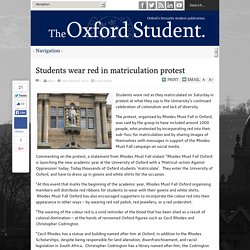 The protest, organized by Rhodes Must Fall in Oxford, was said by the group to have included around 1000 people, who protested by incorporating red into their sub-fusc for matriculation and by sharing images of themselves with messages in support of the Rhodes Must Fall campaign on social media. Commenting on the protest, a statement from Rhodes Must Fall stated: “Rhodes Must Fall Oxford is launching the new academic year at the University of Oxford with a ‘Matricul-action Against Oppression’ today.

Young people. LIVE: Zuma to meet with student leaders. LATEST: Friends and family of the six arrested for the protest at Parliament have arrived at the Cape Town Magistrate's Court to support the six. - Are you at or near any of the protests? 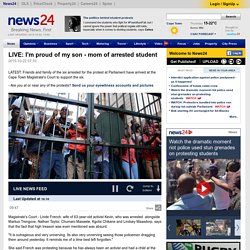 Send us your eyewitness accounts and pictures Jump to bottom Last Updated at 10:10 Magistrate's Court - Linde French, wife of 63-year-old activist Kevin, who was arrested alongside Markus Trengove, Nathan Taylor, Chumani Maxwele, Kgotsi Chikane and Lindsey Maasdorp, says that the fact that high treason was even mentioned was absurd. "It is outrageous and very unnerving. She said French was protesting because he has always been an activist and had a child at the University of Cape Town. "We will just have to wait and see. Her husband, Kevin, was dragged into a police van at Parliament yesterday when thousands of protestors stormed into the precinct. BACKGROUND.

Icamagu Institute or “Icamagu” was founded in 1998 by Dr Nokuzola Mndende who is an academic, a diviner and above all, a practitioner and leader of African Indigenous Religion. 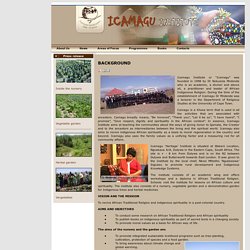 During the time of the establishment of Icamagu Dr Mndende was a lecturer in the Department of Religious Studies at the University of Cape Town. Camagu is a Xhosa term that is used in all the activities that are associated with ancestors. Camagu broadly means, “Be honored”, “Thank you”, “Let it be so”, “I have heard”, “I promise”, “Give respect, dignity and spirituality in the African context”. In essence, Icamagu Institute aims at teaching the communities about the ways of giving honor to Qamata, the Creator and to the ancestors as intermediaries between the living and the spiritual world.

Icamagu also aims to revive indigenous African spirituality as a basis to moral regeneration in the country and beyond.